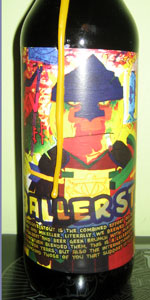 Very rich, very thick, very RIS. The several years of aging added a spicy edge to it, but the RIS base(s) remain strong. I haven't had the pleasure of trying each of the base beers, but this combination was quite enjoyable.

Appearance - The beer was a deep black color with bubbles crown the sides of the glass.

Smell - The malts in the aroma are intimidating with chocolate and booze hitting the nose.

Taste - My initial impression is chocolate and marshmallow. There is a definite smoke presence that is supported by molasses. Burnt malts and sugar come through in the finish.

Mouthfeel - This is definitely a top 10 stout in terms of thickness. I am not sure if it would spill if I held it upside down.

Overall - Having this beer on tap made standing in the rain on Dark Lord Day 2015 worth it.

A: Dark Brown with more carbonation than I expected for this big of a beer.
S: Roasted malt, chocolate, some booze.
T: Decadent - chocolate, coffee, caramel, not sweet at all, very smooth
M: Luscious, silky, so good
O: So fortunate to have seen this taking a walk to the porta potty. 2nd time having it, 1st time on tap. Excellent flavor and mouthfeel.

O- I'm impressed but not blown away. The quality that most impresses me is its complexity. The very same quality may be its downfall, in the fact that its really hard to judge this beer on its own merits and not as a blend. Some of my favorite qualities of the individual beers were masked, some shined through perfectly. Needles to say theres a lot going on here flavor wise. Worth seeking but not worth trading your cellar in the process.

had this one once or twice before, but looks like my review is in the backlogs of the notebook(s), so might as well tick it tonight...enjoyed from a 3Floyds teku glass - solo baby! BALLIN!!!

a - de-waxed and popped the cap. brew poured a watery black with a thin cream colored head that was gone quick. lacing was spotty. not as thick and oily looking as i had expected considering the parts.

t - big and bold. lots of dark lord at first with some intense dark cocoa sweetness. then i'm slammed in the palette with rich dark fruitiness of black albert. there is some remnants of darknesses hopped out stout in there as well and a tinge of the tangy finish from beer geek brunch. it has been said throughout the reviews here, that this is not better than the individual parts, but i'd say that this is probably better than some of the parts. the booziness is definitely well hidden and integrated and i rather enjoy this blend.

m - thick and rich but not as intense as you'd expect. the parts sort of balance out the intensity of some of the bigger brews. very smooth and easy to drink. the booze is invisible.

o - overall, take it for what it is...a crazy blend of some crazy beers. is it dark lord? no. is it darkness? no? same for black albert and beer geek brunch...but if you wanted those beers, wouldn't you open one of them instead? as a blend of a bunch of big stouts, this could definitely be a mess and frankly, i don't find it to be the mess that some people claim it to be, i rather like it. i was a bit apprehensive about taking this on solo on a monday night, but as i dig deeper into it, i'm glad i did. really nice stout and if you like the beers within, you will probably like this...maybe not more, but possibly yes. cheers to FFF...BALLIN!!!