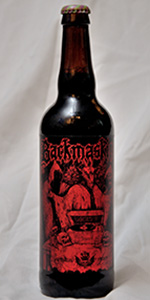 Notes: noun – A recording technique in which a sound or message is recorded backward onto a track that is meant to be played forward. An oatmeal stout.

I absolutely find this beer revolting. Poured from a bomber that cost 9 dollars.

The only way I can describe this beer is that it has the taste of the juice at the bottom of a bag of cheap lunch meat with an aftertaste of bologna.

I will never buy again and to be honest this was my first and last 3 floyds brew. Totally disgusted. I would have poured this crap down the drain if it didn't cost so much.

On tap at Studio 35 Columbus. Nice change of pace beer in between all the other hoppy pales from 3Floyds.

Deeply rooted in the traditions of London brewing, Th fraree Floyds gains inspiration and gumption when brewing a beer of their darker and more balanced side. Their Oatmeal Stout is roasty but smooth. Sweet but dry. -and then citrusy and racy... Ok, maybe an American influence is setting in...

The beer's ominous black body is highly masculine and dark- both in appearance and in spirit. Yet its look simply simmers in the glass, swirling with bone-white creme that settles after initially forming a thick blanket. Its lace is broken and spotty as the light carbonation prohibits its exuberance.

Its aromas are heavily toasted, chocolaty, and java-like. Even as its cream and toffee scents arise, they all seem singed or burnt but in the most savory of ways. Woodish tones amount, as earthen nutty flavors pronounce as the beer's scent is of mother's milk before that first sip.

BackMasking's taste turns creamy as the mouthfeel sets in- creamy-dry on the early palate, the beer's slim extra sweetness simply balance the roasted elements of char. But the middle is both malty-dry and smoothned with heavy cream.

Trailing with a sense of campfire and ash, the beer's minerally finish speaks more to the tradition of brewing than it does to tomorrow thereof. But it's a delightful beer, especially when you don't have to think about it too much.

It's good as always, but also as always I don't understand their need to put their standard hop profile in almost EVERYTHING they do.
To me many of their stouts and porters are overpowered by an overbearing hop profile, this while not as overbearing, probably because it is 6 months old, was likely more so when released. Everything does not need to be ipa hopped, like say, an oatmeal stout.

A- Pours out midnight black a very light brown head that barely hangs around.

S- There is not a whole lot there. It is sweet, cocoa, slight roast, and a little hop notes.

T- Upfront you get a very strong sweetness with a nice cocoa taste. Then at the end you get the roast and you can taste the oatmeal a little bit. The hops come in with a little bitter just enough.

M- Thick with a light carbonation. This beer coats your mouth you taste it for awhile after you had a sip of it.

O- It is a good beer nothing that blows me away but if I was at 3 floyd's or saw it in a store I would pick it up again.

Poured into a Duvel snifter glass.

It is creamy, a different stout, a little stout notes of chocolate, and roasted malt, but creamy and smooth. I like this one very much