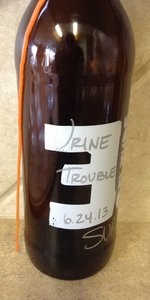 Brewed with our friends at Surly, this Imperial Brett IPA is fermented with a unique strain of yeast, Brettanomyces Lambicus. This yeast creates earthy barnyard notes along with pineapple and cherry pie aromas. Of course, it’s hopped heavily. Simcoe and Chinook are the culprits for the “cat peed on the Christmas tree” aroma.

Bought this at the brewery nearly 7 years ago. There was a thing where because they strongly encouraged everyone to drink it ASAP the community assumed it was infected, so because of that I never opened it. But, ehh, what the fuck.

The aroma is just fucking insane for a beer that was bottled in 2013. Outlandish. Maybe this was too intense to begin with? Because it's two feet away from my face right now and I can still smell it very clearly. Bringing it closer, we got sharp high-alpha hops with a big ol' punch of brett. Really... and I hate to overstate this, but this kinda my ideal saison aroma? But not really what you're expecting in a DIPA. So who knows. All I know is I like it a tons so it's getting high marks.

I hope they do a thing where they brew this and age it 5 years and then release it.

This is one of the most exquisite brett beers i've ever had, and I've had more than my fair share. I don't know how to judge it properly because it went through an inordinate amount of aging for a beer that was supposedly spoiled from the get go. But, man... fuck.

Very dry but with just the right amount of sourness to even it out. A wonderful Spree candy flavored burst at the start followed immediately by dry yeast and the dimly fruity malt profile of an aged ipa. Exquisite.

So I can't add a whole lot other folks haven't already said... pretty much everyone is spot on with their descriptions. But I can tell you that I just popped bottle #2 here in August of 2016, a good three years after I purchased it from 3 Floyds. The difference is startling... the sweetness has really come into full bloom over the last 1000 or so days... it balances out the sour really well. This beer has become a really bubbly delight. Sharp but effervescent on the tongue, extremely boozy. I wish I had 10 more bottles. If any of you are still sitting on one of these, it seems you won't be disappointed with your decision to wait.

Really interesting beer thanks to rudzud for sharing. 7/22/13

A - Poured into a Kate the Great tulip a crystal clear copper hue with a thin white head that fades to leave a thin lacing and light cloud.

O - Overall this beer is really fun and nice, super interesting, loads of brett and fun fruit. Very glad to try this, awesome!