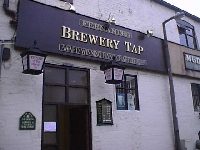 The Brewery, Brewery Tap & the Home Brew Shop are all housed in the original Malt Kiln, built in 1822 by Louis Fernandes. Closed 1929, then reopened to become the malt store & conditioning room for Beverleys Brewery, which closed in 1968. Bought in 1994 by the James family. The 1st floor soon opened as the rehoused Home Brew Shop run by Maureen James. 1997, and a micro-brewery was installed by her husband and the Brewer, David. Then in 1999, on the top floor, the Brewery Tap opened. A very friendly place, that often has one of the James family behind the small bar. Six Handpumps serve at least 1 Fernandes & upto 5 Guest Beers. All beer is served from Firkins, and high turnover means that the beer is always in top form. Often, Guest Beers will not even last a session. There is always a real Cider/Perry. The bar includes a section with at least 40+ Belgium Beers, as well as a range of traditional Belgium Genevers. The Brewery Tap also displays a small part of an extensive collection of brewery memorabilia. Pub Signs, Trays, Posters, and Equipment - much of it from bygone breweries - adorn the walls. Awards are many. Wakefield CAMRA Pub of the Season in 1999, 2000 and 2001, Yorkshire CAMRA Pub of the Year Winner, as well as a plethora of awards for both the Brewery Tap and it Beers. A real family run business that produces high-quality crafted beers. Visit the Brewery Tap and meet friends you never knew you had. This was my local when I lived in England, and I dearly miss it.