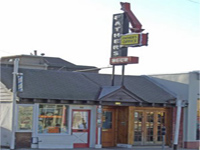 View: Place Reviews
Reviews: 65 | Ratings: 87 | Log in to view all ratings and sort
Reviews by Bramsigman:

Good Selection, but the staff are a bit pretentious.

Stopped in here for dinner last night, I have wanted to check this place out for years now glad I could finally stop in. Atmosphere is pretty laid back but busy at the same time. Tables are shared amongst groups so they are hard to come by. We got lucky and two people left the bar so we snagged the seats right away. Service was solid. They were always around to get me a beer but they weren't the most approachable people either. Quality was top notch. My food was high quality and my beers were all served in the proper glasses so no complaints there. Selection was killer. Abyss, §ucaba etc. on-tap were all pleasant surprises that I was able to partake in. I had heard nothing but amazing thing about the burgers so I knew what I was getting when we walked in and I was not let down, it was cooked perfectly and tasted amazing. Prices were a touch high but I was expecting that going in. Overall an awesome place to stop in Santa Monica, I would return in a heartbeat.

Visited on a Tuesday or Wednesday night for one of the game of the World Series and arrived 7:30 – 8pm and the place was crazy packed. I managed to talk a guy out of his seat at the bar, which probably only accommodated 15-20 people. The place had a great vibe to it; it was pretty loud, but not so much that it lessened the experience. They had a ton of good beer options on tap, different breweries and different styles, with the day’s specials on a chalk board above the wall-o-taps. I ordered a Weizenbock and an ESB to go with my burger and frites. The burger was very good, as were the frites. The staff was very knowledgeable about the beers and their service was good all the way around. After finishing my meal and I was about ready to order, I spot a tap on the wall that I did not believe was on the menu and asked for the beer menu back. Sure enough, they had Pliny the Elder on tap and were not advertising it. I asked the bartender if that tap was just for show and she replied “Nope, there is beer behind that tap.” I had to order one, as I had only had one a few years back while visiting Denver. Overall, a great experience. I can’t believe that I had been to Santa Monica/L.A. a few times before and did not hit the place up. You can bet that the next time that I am, I will be at the Father’s Office. A must try for any BA.

I LLLOOOVVVEEE (deep breath) this place! The whole atmosphere and how they have things set up is great. This place is great for one on one dates or any type of dates. If you have crazy friends, don't bring them to this place. This place won't tolerate that shit. But, this is a great place for great beers, wines, and everything. Limited menu, but for what's on the menu, its great