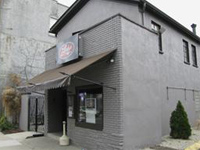 Rated by TheRougeBastard from North Carolina

Reviewed by AColtonOfBeer from Ohio

Vibe: Neat, clean, and I enjoyed all the car stuff on the walls, plus the selective collection of beer posters. Just right lighting - not a dive, not high end, just a good bar.

Quality: Of the 20 taps, 18 were dedicated to craft beers only (no macros), with one to a mead and another to a cider. I have had a few of the beers on the lineup, but a few I definitely had never seen before. I ended up having Lagunitas Lucky 13, but also noted that Stone Mocha IPA was on tap which was going to be my choice until I saw the Lucky 13. I would say high quality beers here - I didn't see anything that would strike me as a dud.

Service: Attentive waitress who offered tastes of each beer before we bought.

Selection: See my comments about quality above. I don't know what their selections of bottles or cans was like as the beer "book" only listed what was on tap and what liquors were available. The beer book they had to go with the beers on tap gave details on what each beer had for flavors and what food it would pair with.

Food: We had the quesadillas to go with the beers while we played a card game. Tasty - and the pico de gallo was well done.

I think I would definitely visit again. The barrel aged stout they had on the menu to pair with a chocolate + bacon cake had me very interested and I may have to come back and see if they have this pairing again.

4.56/5  rDev +3.4%
vibe: 4.25 | quality: 4.5 | service: 4.5 | selection: 4.75 | food: 4.75
I hit Lucky's on a weekday afternoon while on biz in Dayton. It's a compact place, with a bar in the back, running along the left wall with a small number of tables in the front. I expect that the place can get close when the weather doesn't allow patio seating. There were 20+ beers on tap and all appeared to be carefully selected; their list had a good balence between styles and brewers. I had Rivertown's 'Fat Happy Monk' - a wonderful strong Belgian as well as their 'Hop Baron' and Upland Brewery's 'Double Dragon IPA.' All were excellent and beers I'd not sampled previously. New drinking experiences as everyone knows, are to be cherished. I had the Cobb Salad, which was well prepared and went nicely with the beer. Friendly staff there, too who were beer-savvy. Be sure to check out the proprietor's display of model cars. Solid and good place; I'll readily return on my next trip to Dayton.
May 23, 2013

Reviewed by doppleb from Ohio

4.35/5  rDev -1.4%
vibe: 4.25 | quality: 4.5 | service: 4 | selection: 4.5 | food: 4.5
We recently discovered Lucky's and made our way there for breakfast one Sunday morning. What a wonderful atmosphere! Although it was only 10 A.M. and they were just opening, the staff was prepared and eager to serve us. My wife was excited to have a Bloody Mary and take advantage of the Bloody Mary garnish bar. I was handed the beer menu and was pleasantly surprised with the number of drafts available. My wife ordered the Eggs Benedict and I had the 3 egg Denver Omelette, a fabulous choice considering my beer selection (Roebling Porter, by Rivertown Brewery.) Both meals were very good and extremely affordable. We may have been the only 2 people there at 10, but by 11:30 when we left, the place was filling up. I think we have found a new place in the Dayton area for our Sunday morning brunch.
Apr 12, 2013

Reviewed by briggs1965 from Ohio

4.15/5  rDev -5.9%
vibe: 4 | quality: 4.5 | service: 4.5 | selection: 3.5 | food: 4
Lucky's is, in my opinion, the finest taproom and eatery in Dayton, Ohio. We love the friendly staff/bartenders and the beer selection is always exquisite. Sometimes not exactly for the liking of our taste but the selection is unrivaled in the area.

You can always find great food here. from the vegan selections to the daily specials... we highly recommend trying this place if you haven't already. The only suggestion I'd make to this place is to remove the televisions all together... extremely annoying to those who want to talk with others in the bar. It's usually a very eclectic crowd... a crowd I'd like to strike up a conversation with but talking over the distraction of the televisions take away from the charm. Even though... I still give it two thumbs up.

Reviewed by jdwhitlock from Ohio

What I like most about Lucky's (besides the always excellent and always changing selection of craft brews) is the beer menu with a full page description of each beer on tap. I wish more places did this, saves you from hassling the wait staff with 100 questions they can't answer when you are not sitting at the bar.

Atmosphere is divey, nothing special, but if you are not familiar with Dayton's Oregon District it is a great area to hang out.

Food is great with a few oddball exceptions (avoid the Seitan Nuggets). Try the fish and chips where you choose which beer you want your fish battered with. Service is good and always friendly.

Reviewed by 2378GCGTG from Texas

Atmosphere: Def. feels like a family establishment, the bartenders are nice and certainly knowledgable of beer. It's not like it's a classic bar but it's definitely unique

Service: The service is good, they're never like ridiculously packed so I'm sure thats part of it, but in any case everyone is super friendly.

Selection: The selection isn't as great as another place in the area but it's still much better than 90% of the other bars in the area and the prices are extremely reasonable

Food: The food is awesome, hard to put into words you just have to try it!