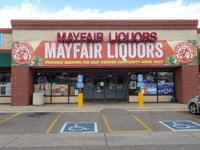 This is the best liquor store in east Denver, and I mean everything east of downtown for miles. I will say that the Grapevine Liquors, a couple miles south has a larger selection, but Mayfair is right off Colfax next to the King Soupers. Easy parking.

Several coolers of mostly Colorado beers. They have a new cooler just for singles and oddities. More barrel aged and unusual strong brews are on a shelf adjacent, where they seem cool enough. Lots of six packs and 12 packs. The industrial products are confined to a cooler at the far end. I always find new beers here and some breweries that don't show up at other places.

It's a very nice store. Staff is invariably friendly and helpful, and I base that on 15 years of coming here. Everything is clean, accessible, easy to see. If you want to shop at a warehouse of dubious, well-aged beer with agitated checkers, go ahead. I think it's places like Mayfair that make for a good shopping experience with inevitable surprises.

Something leads me to believe that Stuckey85 visited the wrong store. Mainly because they have more than 8 doors, and it's not all BMC, not even the majority. Plus the staff is great! I went into Mayfair for the first time because I was getting groceries next door at King Soopers and needed beer. I was definitely surprised at their selection, it's as good if not better than the big box stores, mainly because they still get hard to find beer and it sticks around longer than Argonaut and the Total Bevs.

I was browsing around looking at Russian River when Abe approached me and struck up a conversation saying that they were getting two new RR beers in that week. We talked a bit more about beer and then I left. I came back later that week when he said they'd get the two new Russian Rivers, bought those, and he recognized me and recommended some other beers I may like. He definitely knows what he's talking about. The other staff I've encountered has been nothing but polite.

I wish I still lived in this neighborhood, or in Denver because I'd make the drive. They get the hard to find beers, and they last longer, as well as they get most craft 6/12 packs. If you have a chance to pick Abe's brain, definitely do, he'll probably show you your new favorite beer that you never even knew existed.

This place does not have an amazing beer selection. The only beer they have is in the cooler that consists of 8 doors. Most of these doors are your common domestics(BMC). The staff is another story all together. They were rude to me, my wife, my son, and my cousin. When I paid for my beer, the guy behind the counter asked to see my wife's ID and because she left it in the car, he made her leave the store. She never touched a single bottle because she was to busy holding our one year old son. The entire time my 14 year old cousin was standing right next to me and was never asked for an ID or asked to leave. Also, they never asked for my ID and I was the one buying the beer! I am in my mid 20s and he by law should have asked for my ID, not my wife's because I paid for the beer. I would never shop here again because the staff is rude and does not know any of their stock. When I asked if they have a certain local beer their answer was, "I don't know, why don't you go and look yourself". I don't know how it got such a high rating to begin with. What a shame and a waste of my time. I visited this store on 11/21/2012 at 3pm.

This is probably my favorite liquor store in Denver (and I have been to plenty). It doesn't have the square footage or shelf space of the big liquor warehouses, but it packs in an incredible selection of craft beers, including rare and hard to find bottles from numerous breweries (along with a nice Belgian selection). Mayfair has had a series of beer-loving, hop-headed beer buyers who obviously put a lot of thought into what they bring in. And they'll share that info with customers. Oh, and their wine selection is pretty good, too, you know, if that's what you are into.