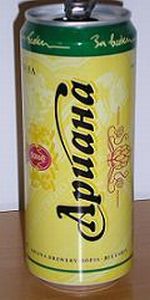 Notes:
View: Beers
Reviews: 6 | Ratings: 9 | Log in to view all ratings and sort

Straw gold and clean filtered, with lots of carbonation.

Light and crisp body with lots of carbonation.

I got this in Kazanlak, Bulgaria where i drank it at my hotel. For the style it was good.

T: the same as the smell, but there is also metal and something medicinal

M: too thin, carbonation is off, alcohol is fairly noticeable

O: avoid this one if possible, there is something off with this one

Had multiple times on draft in Bulgaria.

Overall, avoid. That might be impossible while traveling in BG.

(Notes of 09/2008) Brought back from Sofia by my Bulgarian flatmate. Allegedly, the name "Ariana" was given to this beer in momery of a Jewish girl who was the tragically deceased fiancee of one of the original founders of the "Proshek Brothers" brewery, and her family's financial support was vital for the setting-up of this future business. Now the Proshek Brewery is no longer there, after being incorporated into the Zagorka Group, but this beer has nevertheless survived and is on the production line. BB 20/05/09, served chilled in a large pilsner glass.

A: pale golden in colour, full of super lively, large fizz in action and topped with a white fluffy head dissipating gradually.
S: the aroma is full of grassy Saaz hops with a resinous touch at the tail, backed by a focused flow of sweet, mildly peanutty pale malts and a light sour tinge typical of a lager beer. As the back label of this can states, this beer IS brewed to the type of a Czech pils - some elements on the nose are indeed witness to this.
T: a fluffy mouthful of feather-light malts and mild grassy hops precedes an even lighter, pretty neutral, taste that goes a bit metallic, then a powdery bitterness as of hop-extracts prevails until disappearing in the rather syrupy finish.
M&D: althought the mouthfeel is not so fizzy as the appearance suggests, the body is still pretty thin and fails to give the weak flavour a bit of a boost. As it breathes, the palate even goes watery in the end... Despite being brewed to the type of a Czech pils, the balance is all over the place and thus not a deserved beer for the beautiful name. Still, many thanks to my dear friend Lub for the kind gesture!

Pale lager made by Zagorka. Big head and lots of lace. Very fresh, brought back by CR. Odd pickle smell. Pickly vinegar taste, the subcontract of Zagorka. Not as popular back home as the regular Zagorka. Very dry not malty, very cheap ingredients. Good for marinating. Very watery.