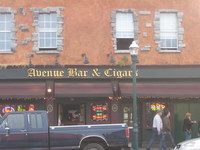 3.24/5  rDev 0%
vibe: 2.5 | quality: 3.5 | service: 3 | selection: 3.5
It's early evening and me and my bros we're looking for something to do in downtown to kill time before our Afghan dinner. One brother kills time with my dad, the other walks with me and we head towards a record shop. I wait eagerly to go as my brother is looking at records, as the place I had in mind for a drink was just over a stone's throw away. After that stop, we walk towards it and he instantly changes his mind, citing the casualness of the place. Well, I'm out of luck. I don't want to go inside 515 Cocktails all alone, I'll look out of place in my clothes. I need another bar with some good beer options, but not haute classe. Then I remembered; there's a bar near the Afghan restaurant, but I had no idea what I was getting myself into...

Dive bar, meet Santa Cruz's demand for craft beer. There's not much to write home about the interior; it's dark with a bar for a dozen people, lots of room inside to move around, an outdoor patio, overall seems decaying. It looks like a possible meeting place for Hell's Angels. But there are signs of Uncommon Brewers inside, which is a good sign to see.

And Uncommon Brewers were among the brands served out of the 32 taps. I see four options from that brewery (including a baltic porter), though with the tap handles so samey, it's a little difficult to tell them apart without a beer menu (which for this place would be helpful). Sierra Nevada showed up for the party, and it brought along 8 of its friends (including tap-only beer). Anderson Valley, Lagunitas, and Anchor also make their say at the tapline. In contrast, I also spot a tap for Busch Beer....what? There may be crap within the selection, but there are more than a few unique optons of beer. Chilled shaker pints are the theme, though the beer was fresh. And having the pint of baltic porter for only $3 is a great way to save dough for all that mariju...hey, did I mention that Marianne's ice cream is delicious?

One pint is all I can get down before I must head over a block and meet family for Afghan food. For all the yapping my grandmother will inevitably make, a little alcohol should make it more interesting.