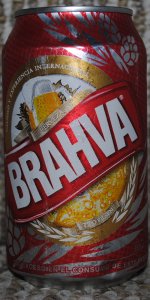 Rated by Mclusal from Colombia

Rated by lecho from Connecticut

Rated by misternebbie from Pennsylvania

Reviewed by ChristopherWIU-UTPA from Texas

2.44/5  rDev -3.9%
look: 2 | smell: 2.25 | taste: 2.5 | feel: 2.75 | overall: 2.5
I consumed this beer both in Guatemala and El Salvador, it was your average run of the mill big Central American Brewery American Adjunct Lager. It was good for a Guatemalan or time at the beach, but thats about it. It pours light golden, average head, lots of carbonation, and average lacings. Had a watery tastes of malts, hops, and rice. It had no aroma, went down easy, with a little metalic tasste, and had a malt after tast.

From the CAN (translated from Spanish): "International quality and experience".

The Crack & Glug revealed another Greg Koch Special - a fizzy yellow beer that may or may not mark me as a sissy. I had a two finger cap of foamy bone-white head with decent retention by the time that I was done with my pour. Its color was a pale lemon yellow, closer to some light lagers than an AAL. Nose smelled strongly of corn and cooked vegetables and I could only think to myself, "Here we go again." It has been a while since I had an AAL from a CAN and I have not missed the sensation. My first sip was a mouthful and it actually had some body to it, unlike being a watery mess as some have been. It tasted about the same as any other - a corn-laden, silage-like challenge for the taste buds. Ho hum and Jeez-O man! It was not gag inducing but neither was it terribly pleasant. It was just more of them same of a crappy overdone style. The finish left me wondering how I used to drink such beers when I was a kid and what my next CANned craft beer will be. Have some when you are in Managua, but don't bother seeking it out.