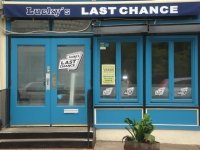 View: Place Reviews
Reviews: 6 | Ratings: 9 | Log in to view all ratings and sort
Reviews by Shnanign:

Lucky's is a small spot on Main St. in Manayunk with amazing burgers. The Incomparable Bacon Cheddar is one of my favorites (dat Sriracha aioli). The sides (like jalapeno tots) are really good too. Not your average burger place.

I happened to go most recently on New Year's when they had BCBS, KBS, and some Half Acre stuff on tap. Normally, the selection is relatively average (10ish taps and 25ish bottles) but these special taplists can be pretty cool. There are usually at least a handful of beers from harder-to-find breweries like Russian River as well. Overall, though, you come here for the food, and the occasionally surprising beer selection is a bonus. Worth a stop.

A quick jaunt off the train takes you to Lucky's. From their site, it seemed like everything I like in a burger bar, but...it was a bomb in real life. The place is cool enough, small bar, with limited seating and a couple booths in the back of the room. There's also an upstairs, but I didn't get to check that out. It's got that gritty hipster vibe. Service was pretty bad. Table service meant getting served one beer and then never seeing the waiter again, so we had to get up and order everything at the bar. Not to split hairs, if that's even what you can call it, but I mean, customer service is a thing when you're at a bar.

Beer selection was decent, with a good variety of basic craft brews, local and otherwise. Some cans and bottles. Prices were pretty absurd, with a 10 or 12 oz. pour costing about as much as a pint of the same beer elsewhere.

The food was absolute garbage. Like really embarrassingly bad. The burgers were salty sludge patties, and the fries were a dry over-fried mess of little leftover crumbs from the bottom of a freezer bag scraped from the bottom of a grease trap. The topping on the burger made it edible (gorgonzola, mushrooms, onions), but that's about it. One of the worst burgers I've ever had anywhere, including fast food and grocery store freezers. My wife couldn't even finish hers, and we left about half of the fries because they were literally inedible.

Other than a moderate good beer list, there's nothing here that would ever make me come back. You could literally get a better meal at Burger King.

Wow! What a discovery, thanks to the BA app "nearby" feature. We are not fans of Manayunk as a whole, what with not being fratboys in our 20's. But we had to pay a visit to listen to some bands for our daughter's wedding. Stopped here before and after.

Not a big place, probably a dozen bar seats and a half dozen tables. Nice vibe, great music, a little divey but the bathroom was clean. Beer list was small but well chosen (Lagunitas Citrusinensis and IPA, Dirtwolf, some others). Lines were clean, beer tasted as it should.

The food was out of this world. Great burger (get the PB&J Bacon Cheeseburger. Won the Philly Burger Brawl and you will see why). Good mac and cheese varieties, hot dogs and tots.

Service was great. Will be back!

I made my first stop to Lucky's Last Chance last night, and it certainly won't be my last.

Some friends of mine had exalted its merits to me for some time, but I resisted, never having really liked it in its former incarnations as a Red Bell Brewpub, some kind of place that played trance music that put me to sleep (literally), and some other pub that was lack-luster and without character or charm.

Whoever's running it now has really changed it however. It's loaded with character. It's small, but that actually works in its favor because it's comfortable; and the decor has an artsy vibe. I'm not sure how to explain that exactly, but the back wall of the downstairs bar seems to have been decorated by Shepard Fairey himself. Everything about it seems honest and sincere - kind of like when you walk into Tattooed Mom's and you know that someone wasn't trying to be hip, they were just being themselves. Most importantly, the staff have the rare ability to make you truly feel welcome. I never remember bartenders names (well, rarely), because lets face it, most of them couldn't care less, and may or may not be there the next time your back. Chris, if you read this, I tip my hat to you sir. Very good job, my brother!

Now before I go into the beer and food, let me say that there are just two things I hate about the place. #1, the goddam garlic fries smell like vomit! I understand they're excellent, and that it's just the parmesan cheese on them, but man, I couldn't even smell my first beer. #2, the t-shirts above the door cheese-up an otherwise hip and unpretentious decor.

OK, on to the beer. Hands down, with the exception of going to the Foodery on the Ridge and paying jacked-up prices to sit in an fairly bland deli, there is no better selection in the area. I love Union Jack's and the Dawson Street, and they both have more taps, but Lucky's overall selection is better.

There are also about 20 other beers and 2 ciders but we couldn't drink everything. Maybe next time.

For food I had an El Guapo Burger done with a black bean veggie patty ($10.50) that was so good I also had a Peace, Love & Veggie Burger ($10.50) as well. I shared some of the Old Bay fries and the onion strings (excellent), and everyone was quite happy with their beef burgers and hot dogs. It's still bar food, I can't give them "gastro pub" status, but it was very good.

Overall, it's well worth a visit.

Living in Manayunk for about 5 years now I've watched this building change over a few times. From Tonic, to Yunkers, to now Lucky's. I always wondered if the spot would find its place and I think that it finally has.

I have been to Lucky's a few times now and it has yet to disappoint. There are only 6 taps or so but they certainly know how to use them. (I follow facebook and their website to check tap lists) The bottle list is also fairly long and diverse for Manayunk, I would of estimated approx. 40 or so bottles and pricing was not too bad.

Food is limited to burgers and dogs, but again they know what they are doing here. The burgers we had were excellent and my girlfriend has been begging me to go back to try the dogs.


Atmosphere is great as well, I loved the music selection and the Obey art on the wall was right up my alley. People are friendly and the bar tenders were great, offering up suggestions and tastes for anyone who asked.

Overall a great and now pretty standard place for me to stop in and get decent brews after work or on the weekend. I would like if they had more food on the menu but again the burgers we had were excellent. This is slowly becoming my go to craft spot at my end of Manayunk (West).

This is my favorite bar in manayunk. It's got one of my favorite beers on tap which is hard to Find anywhere, Allagash Triple. It also has a couple of other good Craft brews on tap (ie Southern Tier, Founders Breakfast Stout), It's never overly crowded and the bar tenders are friendly. Haven't tried the food but hear it is good.

I went there for New Years which was a great alternative to the other overcrowded establishments on main street and the early admission ticket was only $25. The buffet that night was descent pub grub. Way better than what tonic or Yunkers ever was.

Lucky's Last Chance in Philadelphia, PA
Place rating: 4.21 out of 5 with 9 ratings