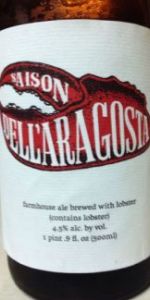 3.84/5  rDev 0%
look: 4 | smell: 3.75 | taste: 3.75 | feel: 4 | overall: 4
Bottle from the Blending and Bottling in Portland. Pours a light amber gold with a finger of bubbly white head that dissipates, smell is mild sour lemon lime, hints of grass, tase follows the nose with grassy lemon and lime, no hints of lobster to speak of, feel is light and bright. A nice low ABV farmhouse, would have been fun if it had more brine, but still pairs very well with lobster!
Oct 17, 2020
Rated: 4 by Elicoleman from Colorado

Sep 30, 2019
Rated: 4 by PhineasMcClintock from Massachusetts

Rated by VeganUndead from Virginia

4.24/5  rDev +10.4%
look: 3.75 | smell: 4 | taste: 4.5 | feel: 4 | overall: 4.25
A: pours a clean, hazy, straw yellow with a fizzy, rapidly receding head with very visible bubbles, you can tell just by looking at it that this is a well attenuated beer. Somehow very fitting based on the description. Nice.
S: Immediately, you get the brine mixed with the lemon, seems like rock salt, very nice, almost has something akin to pop-rocks. There is a tiny bit of funk and zest coming through as well. It's quite pleasant. As the beer warms, the lobster notes do become more present, only so, never killing the atmosphere by smacking you in the face with this beers gimmick.
T: Honestly delicious, the lobster doesn't hit in a direct way, it seems to be mostly present in a meaty and somewhat rich aftertaste. There is a hair of sweetness and lemony tartness, with the funk of the saison yeast doing most of the sourness and the salt character serving in an ancillary capacity. There is almost something of a berry character coming though here, seemingly a biproduct of the marriage of the malt, salt and lobster
M: dry, but with a full enough body
O: I would like to see this beer made without the lobster, to see if I could even tell the difference. Don't get me wrong, I can taste it, but it is here in a very mild supplementary capacity and while I certainly bought this out of curiosity, if you hadn't mentioned the lobster there is no way I would have known. I no doubt would have picked up on something, but I couldn't have come up with crustacean. Needless to say, lobster or no, a damn fine beer, kudos.

4.18/5  rDev +8.9%
look: 3.5 | smell: 4.25 | taste: 4.25 | feel: 4 | overall: 4.25
you just have to be floored by this, if you are a beer person, a food person, whatever, this appeals to me on so many levels. we of course have seen stuff like this before, oyster stouts all over the place, and dogfish head did a lobster beer i remember, but this is all about the lobster in a way no other beer has been with meat or fish in my experience, i love it. the beer is insanely light, almost just a shade closer to yellow than water, and primarily clear, with almost no head or bubbles. my only critique of this thing is that its not more carbonated and lively, a bright beer would really be amazing. the aroma is ocean water brine, tangy light lemony lacto, and minerals, with a distinct lobster water smell, so true to lobster that it couldnt be crab or shrimp or anything, it is lobster all the way, but its delicate enough to seem to oddly make sense in this beer. the flavor is like that too, with the lobster not coming on until late, but seriously being meaty, crustacean shelly, well salty, and with the way the grain is built, almost buttery in a delicate earthy sort of way. the salt is perfect, there are other minerals here too, calcium or something, and a very soft grain profile. acidity is no more than a squeeze of lemon would be on fresh poached lobster meat, and thats a nice touch. it doesnt sound like it would be good, but its amazing, and all so light. more carbonation is needed, but i hardly miss it in the end. they must have used a ton of lobsters, and had a great feast when this was done, probably added late to the boil, there is no overcooked rubbery aspect here at all. maybe not for everyone, but i was just blown away that a beer like this is even possible, it just opens up so many doors. thanks oxbow for one of the most unique beers on the planet!

Reviewed by craftaholic from New York

A: Slightly hazy lemon yellow with smallish one finger head that dissipates immediately and leaves no lacing.

O: Interesting beer. I don't pick up on the lobster at all, and this reads more gose than saison to me. Still an enjoyable beer for a hot day.

Reviewed by tkdchampxi from New Jersey

Reviewed by illpass78 from Maine

Aroma: Sour, salty. Has a somewhat ocean watery character to it. A whiff of coriander, though it's not brewed with coriander.

Mouthfeel: Light and easy, but complex. Worth sipping even though it's definitely a warm day beer.

Overall: Sometimes a wacky idea comes together. This is one of those times.

Reviewed by SebastianOwl from Massachusetts