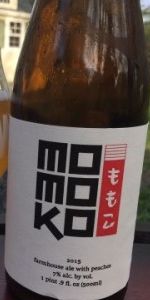 Poured from a 16.9 oz bottle into a stemmed harmony glass.

Pours a hazy golden color with a finger of creamy white head. The head leaves a nice ring of lacing before settling into a thin sheet.

The aroma brings notes of peaches and oak, as well as some lemon and orange rind. Has an underlying barnyard funk character.

The taste is very lemony and acidic up front; aggressively tart. There are notes of peaches and vinegar, as well as some yeast. Finishes funky and earthy.

Overall, a good beer that's honestly a bit hard to describe. It's very funky and very tart, yet offers plenty of underlying fruitiness to provide balance.

Appearance: Pours a cloudy golden color with a finger of bubbles that fades quickly to a collar; a few shards of lacing

Taste: Lactic under-ripe peach and lemon forward with an austere oak aspect building through the middle; the tart fruit remains, throughout, with a dry, funky aspect in the finish

Overall: This is interesting in that all the flavors are well balanced - neither the sourness nor the funkiness nor the oak are out of whack

Look: Translucent Hazy pale orange with no head. There was some head while pouring but it faded quickly. Very active with big single bubbles.

Taste: Tart mixed culture funk, Greek yogurt, and unripe peaches. This flashes quickly for an attack. Then a body of white nectarines, peaches, canned peaches in syrup, salinity, straw, cracker malt, and a touch of oak. There is a slight mineral note on the finish like slate.

Overall: A tasty wild ale. They really nailed the fresh peach notes in a clean crisp package. The tartness could be dialed in just a bit to allow a bit more of the delicate notes come forward. It’s not puckering but there seems to be a bit more to the beer that is lost in the tartness. However, Oxbow nailed the blend of fresh fruit to farmhouse funk and it drinks so clean. Enjoyed this one.

Drank from a 1pint .9fl.oz (500ml) bottle purchased at Oxbow Blending & Bottling, Portland, ME
Bottled: May 2017
Served in a tulip

The nose was crisp and bright. Saison-like yeast notes came through strong. Somewhat grassy. Touch of funk and oaky barrel. Slightly fruity. Not sure I would pick out the peach specifically however. The musty peach and funky notes intensified as the beer warmed. Later, the mustiness took on an almost mildew-like quality.

The flavor was also crisp, tart and bright. Crackery malts appeared up front. The tartness came in next. Nice mix of lemon and underripe peach in the center. The beer turned more sour as the liquid moved along the palate. Loads of tart brettyness in the finish. Barrel notes and big, dry, oaky tannins came through as well.

Nice frothy, fluffy mouthfeel. Crisp and sprightly on the palate. The liquid contained a fairly aggressive, spritzy effervescence that felt almost a bit Champagne-like. By the end of the session, the acids in the beer felt as if they were stripping the enamel from my teeth.

Momoko is a very solid release from Oxbow that started out much like a typical saison and finished more like a funky wild ale. My one gripe was that the peach character could have been more intense. Overall, a very solid beer but pricey at $18 a bottle.

The beer pours very little head when poured while the beer itself is very nice to look at. It has a nice and orange hazy look to it, which both works for the style and indicative of the peaches it was blended with.

The smell and taste are pretty good with better smell. The smell has a good strong peach note to it while it has more subtly orange notes and very light oak note that smells pleasant easily gets overwhelmed by the peaches. The taste is pretty good with strong tart peach notes with a slight syrupy sweetness to it. The delicate wood is very light and gets overwhelmed by the peaches.

The feel is good. It's a medium bodied but has a good weight to it that you would normally feel from peach juice. The beer has a slightly acidic feel and a dry finish as well medium carbonation.

Overall, this is a very good beer and worth getting your hands on. The traditional Belgian notes may be slightly covered by the peaches but it's definitely delicious.

Appearance: Orange bodied beer with short-lived bone white head that settles down to a ring of head around the glass.

Smell: Lots of peaches and this beer smells of tartness.

Taste: Lots of tart peaches. Well water and minerals. Hint of oak. Fruit forward wild that is moderately acidic. Level of sourness is 6.5/10

Overall: I have always been a fan of Oxbow and thier barrel aged beers. Momoko is the definitely best that I have drank from Oxbow! This is a really fantastic peach wild /sour beer.

Amber tap pour with a deep haze and no visible carbonation. Vinous aroma with an apricot note. The flavor is pleasantly and significantly tart with peach and grape over an oak back. The finish is dry and the fruit flavors persist. This is special.

The peach doesn't dominate the aroma or flavor profile, but it is present enough that you know it is there and enjoy it. Much more tart than expected, this has to be qualified as a true sour, and one of the better ones I've had in a long time

amazing peach complexion to this one. as good as peach wild beer gets, up there with the very very best of them. it has wonderful effervescent carbonation, a wheaty fluffy round body, and a juicy ripe peach character thats akin to taking a bite of a perfectly ripe fuzzy juicy yellow peach, except the beer is not sweet in the least, seems well aged and bottle conditioned, but the fruit flavor remains at the forefront. bursting peaches all the way though, a bit of funky wild yeast and a slight tang that flatters the fruit rather than takes it over, and i think that is a very fine line. the hazy in the beer and its relative thickness is almost peach fleshy, pulpy, really fresh. still delicate though despite the complexity and peach intensity, wonderful dancing bubbles, seemingly driving the fruit deeper. mellow wood notes here, minimal acidity, drying farmy funk. of all the awesome peach wild beers out there, this stands out to me as the best or darn near it. the recent selections from oxbow that i have had have absolutely blown my mind!

Pours golden. Not much in the form of head. It dissipated quickly. Lots of peach aroma and the Oxbow house culture. Great peach character, nice and dry. Light tartness. It's very pleasant to drink.

L: strong carbonation lead to a very strong head that dissipated rather quickly. A touch of lacing left around the rim of the surface tension. Golden orange in color and opaque.

This is an absolutely perfect fruited saison. Opens with really fresh peach and fruity aromas. Wonderfully balances a light, effervescent tartness, subtle funk, and juicy peach flavors. Far and away the best beer I've had from Oxbow. I wish I could have this all the time. Seek this one out.

One of the most balanced and fresh tasting peach wild ales I've tried yet. Perfect acidity compliments and enhances peach flavor. I could drink this all the time.

Thanks to Kyle for sharing.

A - Poured into a Kate the Great tulip a nice hazy golden hue with a thin white head that fades to leave light wisps.

Thanks to Kyle for sharing.

Momoko from Oxbow Brewing Company
Beer rating: 93 out of 100 with 87 ratings