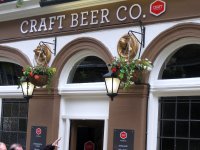 View: Place Reviews
Reviews: 3 | Log in to view all ratings and sort
Reviews by thepeter:

OK, if you go to London, this is the pub that you must get to! Classic and new all at the same time. Mirrored ceiling, jam packed bar full of taps, nice somewhat spacious upstairs, no crappy carpeting and in a great location in the center of the city but in an area that has a "neighborhood" feel to it. The Beer selection is fantastic about 12-13 cask ales going always a couple of sour beers on draft, a house lager by Mikkeler that may be one of the best I have ever had, and a fantastic bottle selection as well. Quality of the beers is superb and the casks are kept in excellent condition from the best staff that I know of in London. Service is friendly fast and knowledgeable. The food is quite limited to home made pies and scotch eggs and alike but I hear that they are fantastic and as they are always out that just proves the point a bit further. Sure it is a bit pricey but well worth it. Best Beer bar in London. . . Yeah I said it!

I visited last September and will be there again in a week. Jonah and the owner (?) completely get it. No BS, nice guys, fantastic slection. The house lager is outstanding. The Grassroots stuff, the cask stuff they had. This would rate highly in a compettive craft bar market like NY or SFO but for London it is hands down the best selection, proper glassware, great staff. Make the trip you will not be disappointed. Location is near the tube. I was on a layover and left from Heathrow hit a museum then this place and back to airport. Very enjoyable day.

Adding to the first review of the CBC, having visited 4 times now during August and September!
37 beers on tap, 16 are cask conditioned real ale the other 21 craft keg offerings.
The 16 cask tend to be from micro breweries that you don't tend to see outside of that local area and unlike some pubs where they may have 3 or 4 barrells from that particular brewery, the 16 cask sticks in the CBC can often display 13 or 14 different breweries!
On my last visit (Fri 16th Sep) I was focussing on the Keg end of the bar. Typically 3 or 4 offerings from Belgium and Germany, maybe a Czech and a good 10 to a dozen American / Scandatlantic (TM) craft beers.
Last week I imbibed with Southern Tier IPA, Double IPA and porter, also from memory a couple of Grassroots beers on keg, 2 Mikkellers and Evil Twin Ashtray Hearts (all 4 of these craft brewers seem to be regulars - but usually a different variety of beers on each visit).
Food is limited to tasty scotch eggs and pork pies (one with black pudding in !) and crisps and nuts.
Service ok - but does get very busy between 6 and 8, maybe 3 or 4 deep at the bar and a 10 minute wait. Staff all seem to know their stuff though!
As with the bar, its a busy pub and finding a place to sit is not easy. Also the upstairs area gets very busy. I went up there a few weeks ago at 5pm when it was deserted, then at 5.25 a bar tender came round and put a "reserved from 6pm" card on EVERY table ! You've been warned!
As a result I decided to reserve a table for my most recent visit (for 8 people). Easier said than done! They didn't respond to email or twitter and they have no telephone (unbelievable!). We managed to reserve in the end by way of a friend calling in personally !
In all though a cracking pub , the best selection in London on draft!