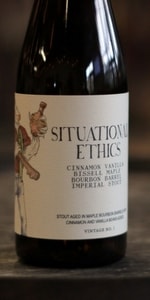 Notes: Situational Ethics is a series of decadent imperial stouts, each aged in a different barrel. This bottle is the Bissell Maple Bourbon barrel aged version, with cinnamon and Ugandan vanilla beans added.
View: Beers | Place Reviews
Reviews: 2 | Ratings: 5 | Log in to view all ratings and sort
Reviews by StraightNoChaser:

look: Stygian dark like a stout ought to be...Check. Modest mocha head on the pour that mostly recedes
smell: All the notes as advertised, though not crazy rich as the decadent label implies. Cinnamon is particularly subtle.
taste: Much like the nose. The Cinnamon is more prominent here. I like that being subtle unlike Cinnsanity for instance! Didn't see how much time was spent in the Bissell Bourbon Maple barrels but I would guess not too long. Don't get me wrong this is a great beer and smooth as all hell. I would love to have this after a year or longer in the Bissell Barrels. I bet that would be decadent for sure!

Pours jet black with just over two fingers of mocha head. The bubbles fade to a central island, thin halo and a few small trails of lace.

Smells of roast, maple, cinnamon, vanilla and bourbon. The slight alcohol tingle works well with the cinnamon and maple.

This is the second of the Situational Ethics variants that I tried and once again Monday Night has absolutely nailed it. The cinnamon pairs well with the maple and vanilla really highlights the bourbon. An imperial stout that delivers at every level. Monday Night is absolutely killing it with their recent releases and I’m thrilled to have another bottle to enjoy in the future.