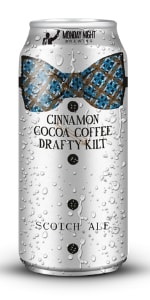 Notes: Cinnamon is a versatile spice. You can stir it into oatmeal , add it to chili, and even snort it (not recommended). We thought we’d add it to our already delicious Drafty Kilt as a special treat. The addition of locally-roasted Batdorf & Bronson coffee and cocoa nibs makes this treat even more indulgent. Refined notes of spice and dark chocolate abound, making this beer perfect for a cold winter (week)night.
View: Beers | Place Reviews
Reviews: 2 | Ratings: 9 | Log in to view all ratings and sort

16 oz can poured into a tulip

A- A deep ruby red with a two finger tan head.

O- A nice change to the base beer, would have liked the smokiness still be in this, but the cinnamon is a nice touch.

Smell: Plum-studded toasty brown maltiness, a little nutty and housing some brown sugar tones. Cinnamon, though mild, is the most prominent of the additions on the nose, followed by a lesser note of coffee and cocoa definitely bringing up the rear.

Taste: Toasty, a smidge roasty, a bit nutty, some burnt bread. Its sweetness is fairly tempered here, as is the fruitiness. Instead, the cinnamon is a bit more bolder, with some generic, store-brand coffee flavor and a little dry, bitterish cocoa kick. Earthy, cinnamon-tinged finish.

Overall: The added ingredients are a bit of a deterrent and a detriment, frankly. With minimal (bland) coffee and (blah) cocoa with cinnamon obscuring the base scotch ale, I'd say just stick to the original.