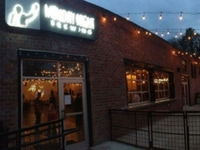 Reviewed by acmurphy696 from Georgia

Rated by Cuervo_PCB from Florida

Reviewed by andypeters1971 from Georgia

3.16/5  rDev -25.1%
vibe: 3 | quality: 3.5 | service: 3.5 | selection: 2.5
in a former industrial building on the hot Westside of Atlanta. It's downhill from the Atlanta Water Works and you can really smell it when outside the brewery. Otherwise the interior of the former industrial space is interesting and it's a good use of a formerly abandoned building. The beers selection is fairly uninspired
Jul 24, 2019

Rated by BeerGuyAaron from Georgia

Rated by Samnem from Georgia

Reviewed by mfreund7 from Massachusetts

Reviewed by PhineasMcClintock from Massachusetts

3/5  rDev -28.9%
vibe: 4 | quality: 3.25 | service: 2 | selection: 3.25
I wasn't really going to comment about this on this forum, but since my buddy before me did, I guess I will confirm the story.
"I'm the solo bartender tonight, so I don't have time to pour flights". We stared at the menu for over 2 minutes, while he stared at us, and no one came up to the bar. I then politely asked, "since there is no line, could you pour a flight? If someone comes up behind us, I understand". And bammm, the attitude, and the "let's see some ID's!" (I am obviously in my forties). Let's waste more of your precious time.
I get it. If it was busy, I would have MORE than got it. Completely soured our experience.
Doubt we'll be back...

3.54/5  rDev -16.1%
vibe: 3.75 | quality: 3.75 | service: 2.5 | selection: 4.25
Stopped here for some samples on ironically a Monday Night. The place wasn't overly busy and when we asked for flights the short bald bartender gave us attitude saying "it would take a while to pour flights" for us. My friend responded with saying "Well, we're the only ones in line right now so we don't mind waiting". The bartender then rolled his eyes and carded us which just seemed like a ploy to irritate us or something. He poured the flights in what I thought was a normal amount of time... 2 flights in under 5 minutes doesn't seem too long to me? Anyway, there was a side bar that we ended up going to afterward that had some of the more limited stuff on draft, the girl running that was awesome. The vibe of the place was nice, I dug the wall of neckties and such. The beers were better from the limited run taps than the year round stuff. I know there is a second location for MNB and I would probably check that one out in the future if I'm ever back in the area.
Oct 02, 2018
Rated: 4.46 by speedlimit7 from Georgia

Reviewed by solerunner from Georgia

4.17/5  rDev -1.2%
vibe: 4.25 | quality: 4 | service: 4.25 | selection: 4.25
My wife and I dropped in at Monday Night Brewing a couple of weeks ago while we were visiting Atlanta. It's got a really cool vibe; kind of a warehouse-cum-dad's-basement feel with mismatched furniture and a projector showing cartoons (the necktie wall is also a nice touch). They had around 17 taps; 9 at the main bar and an additional 8 at the satellite "hop hut" on the other side of the taproom. I did a taster tray; the beer was quite decent. Service was great and friendly; it was also efficient despite being really busy. I would not hesitate to return the next time I'm in Atlanta.
May 18, 2018
Rated: 4.73 by sk8kidamh from Georgia

3.81/5  rDev -9.7%
vibe: 4.25 | quality: 3.75 | service: 4 | selection: 3.5
This was a cool little place. I had tried some of their barrel aged beers at the Porter, and decided to give the brewery a shot. It's on a secluded back street, so it's a nice laid-back location. Big open room inside with tables, games and Bob Ross on projector. Outside deck has more games and a firepit. While it wasn't too busy when I visited, I'd imagine it could get fairly hopping during peak hours. There were eh maybe 8 or so beers to chose from, with some being available for a 4-sampler flight. I wasn't too blown away by the ones I had, but the Han Brolo pale ale was nice, and my favorite of the lot. There was only one guy working the beer pours, so the line got backed up a little, but he seemed to be doing his best. There was also lots of merch available, as well as a huge fridge full of cans and bottles to take home. Definitely a neat place worth checking out, and those barrel-aged stouts they made were fire.
Dec 20, 2017
Rated: 5 by radiowxman from Georgia

Rated by jmikepool from Texas

Reviewed by BonnieBaggett from Georgia

4.29/5  rDev +1.7%
vibe: 5 | quality: 4.5 | service: 5 | selection: 3
I really enjoyed the tour of Monday Night Brewing and their beer is excellent. The Blind Pirate fresh on tap was amazing! Probably the best $10 I've spent in a very long time. I will definitely return. My only negative rating is for selection. Being a fairly new brewery, Monday Night's selection is very small, but the beer is quality so it's not that big of a deal. Highly recommended!
Mar 26, 2015
Rated: 3.73 by ari32 from Georgia