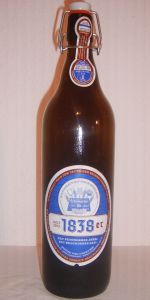 Pours a deep, dark amber, coppery coloration with a large, foamy head. Smells of caramel malt and citrus fruit, with a certain grainy, slightly grassy note as well. Taste is a very nice balance of caramel, bready malt and citrus hops, with notes of toffee, grapefruit, red berries and white grape. There is a light underlying graininess and grassiness to this as well. Finishes with a mild bitterness, medium bodyand carbonation.

I'm actually NOT gonna rate this to style, because if I did my score would be much lower and that would be unfair to a very tasty brew. While this does retain certain characteristics of an Alt beer, it is definitely not a purebred Alt beer in my opinion. If you were to serve this to someone in a blind taste test, not in a million years would they identify it as an Alt. Due to the strong hoppy notes, it is much closer to a Pale Ale or even an Amber Ale in my mind, which is not a bad thing at all. After all why shouldn't a traditional Alt brewery experiment with other styles, I applaud them for it.

Stange at the brewery. My seventh 5/5, incredible beer.
Looks as good as their flagship alt, slightly lighter in color. Nose is thick, rich toffee; I could believe it's more candy than beer. Strong caramel notes up front give way to gentle grapefruit hops and a clean, easy finish. The flavors are vibrant and clear but never cloying or overpowering.
Definitely an alt rather than IPA, but the little dash of Yakima fits it perfectly.

The most important thing first, the 1838er has an unusual aroma for an Alt, because of the fruity hoppyness in it. Its the first Alt I have ever experienced with a very well balanced hoppy impact going along with the usual malt body, due to Cascade and Galaxy hops, Schumacher Brauerei brewed in for this anniversary beer. Aroma of caramel, citrus, blueberries, plums and grapes, malt is present but not dominant in this beer.

The hops add a very interesting complexity, has a refreshing taste, going into a IPA direction, without forgetting of still being an Alt. Balance is great in this, a noticable bitterness kicks in after the typical bready malt beginning, which by itself has fruity undertones in it. The fruity bitterness is a very nice addition to the typical Alt-character. In the end, malt is still the most important part of the 1838er, it is present all the time, but goes along with an interessting bitterness, which creates a very smooth mouthfeel.

In addition to that, in my opinion this beer is very outstanding, because it is so different, compared to the usual Altbier. At this very moment, many different brewers are trying to create many new beer interpretations, not only in the USA but also in Germany. Still, this movement has not reached the very traditional Altbier-scene, and the 1838er can be seen as a first attempt to reach out for new flavors.

Schumacher 1838er from Brauerei Schumacher
Beer rating: 4.45 out of 5 with 7 ratings