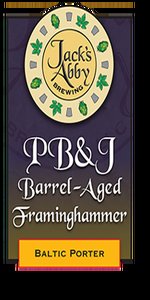 My next brewery horizontal will CANsist of a curious admixture of bottles & CANs, the latter in support of The CANQuest (tm) while it all serves to reduce the ever-shrinking backlog here at Chez Woody. 5/7.

This last is interesting since a Porter is usually/generally an Ale, vice a Lager. That said, I am all for Lagering! The best type of Hefeweizen, IMHO, is one that has been fermented under Lager, vice Ale, conditions. Doing so causes my beloved clove esters to become forward, surpassing my less-appreciated banana esters. Let us hope that Lagering brings that level of success to this beer!

I am taking this portion of the horizontal VERY slowly, one beer per day, so as to both savor each one & to ensure that I will be capable of going to work at some point. Night shift has been a real eye-opener! Zzz.

I prised off the cap with a long-disused bottle opener & started a slow, gentle C-Line pour into the awaiting glass. It evinced a pseudo-cascade that formed a finger of fizzy, foamy, rolling, roiling deep-tan/light-brown head that quickly faded to wisps. Color was Very Dark Brown to Black/Opaque (SRM = > 34, < 44) with cola highlights at the edges. Nose did not smell of bourbon ... at all. Instead, it smelled strongly of raspberries & dark chocolate! 8=O I generally eschew sweets in my advancing age, but chocolate-covered fresh fruits are a real treat. I will eat everything from strawberries & raspberries to bananas and enjoy them. This was very evocative of just such a treat. Mmm. Even if it didn't seem very bourbon-Bbl. aged on the nose. J/S. Mouthfeel was thin-to-medium, much less solid than either the base beer or the base bourbon iterations, but more in line with a Lager. The taste remained chocolaty & raspberry-fruity, but I was still not getting much in the way of bourbon, although its alcohol was unmasked & creating a real burn with each sip. I got the peanut flavor very strongly on the finish & once I tasted it for the first time, each subsequent sip incorporated peanuts with the chocolate & raspberry flavors as noted previously. Conspicuously absent, however, was any sign of bourbon. Oh well, I was not really big on its flavor anyway so it all worked out. Finish was dry, mainly due to its alcohol burn. Phew! YMMV.

Pours opaque, jet black in color with 1/4 inch head. Taste is peanut butter, grape jelly, Syrah grape, char, and vanilla. Heavy bodied, low carbonation, sweet and roasty. Delicious. I have had a lot of beer but nothing like this. I will need to get this again.

Served in a teku glass from the bottle.

Smell: Deep whiskey aroma with a fruitful scent that sticks to your nose.

Taste: Sweet berries doused with whiskey and light American coffee. The peanut butter is subtle and you kinda have to look for it.

Mouth: Dessert like finish, a touch sweet in the end with soft carbonation and ultra sticky body.

Overall: good brew. I wouldn't have two in a row but would definitely buy again. First one of the night and more to follow, just no reviews for now. Salud!

Trying to let it warm up a bit but I do get a pb&j essence. Light peanuts, not pb, but bigger raspberries. Some crusty bread too? Probably my subconscious picturing a pb&j sandwich

Taste leaves a lot to be desired. Peanuts, chocolate and vanilla and an overpowering amount of tart raspberries. I don’t get a whole lot of bourbon or booze for that matter.

The body needs to be bigger, the carbonation to be less as well. This beer is a bit of a disappointment to me, I’ve hyped myself up for it. Maybe it’s bigger and better fresh. I received in a BIF around October, at this point it’s 10 months old. I’d be willing to give it another go with a fresher bottle.

O- Love the raspberries in this, they are nicely balanced with the porter. Definitely something I would pick up again given the chance!

A - Pours nearly black with some mahogany highlights at the edges of the glass. The head was a minimal (expected due to the peanut adjunct)...pinky finger at best with very little retention. What did develop was a rocky and the color of a coffee-with-cream. (3.5)

S - Nothing outstanding. Roasted Peanuts, Chocolate and perhaps a faint whiff of Oak. Sadly, there was absolutely no hint of Raspberry...perhaps it was more prevalent within the first few weeks of bottling. If so, it has faded completely. No hint of the 10% ABV. (3.5)

T - Roasted Peanuts, Chocolate with a slight reminder of it spending time in Bourbon Barrels (char and Bourbon). Once letting it warm up to Room Temperature, there is what might be considered to be a ghost-like reminder of the raspberry, but that might just simple be power of suggestion. Like the nose, this is a bit one dimensional. (3.5)

M - Despite the 10% ABV, the body falls on the lighter side of Medium with conservative carbonation making it supremely drinkable. It finishes dry with a mild charred bitterness. Once at Room Temperature, there is a hint of alcohol warmth in the throat. (3.75)

O - Being a fan of BBA Framinghammer and its variants (specifically Coffee and Vanilla), this was a disappointment. The $10 price point for these BA beers from Jack's Abby are reasonable but with no raspberry in the aroma or flavor and lack of barrel influence, this is my least favorite of the series. However, this could very well have been much more impactful fresh...do not age! (3.25)

Aroma certainly features some roasted peanut & traces of raspberry to compliment the dark malt and bourbon. Taste is more heavy / bourbony, but the peanut butter is there & works well with the vanilla / caramel of the bourbon though the fruit addition gets lost. Good desert beer.

Many thanks to SawDog505 for this bottle.

O - Totally enjoyed this one!