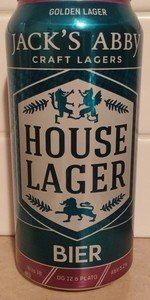 Notes: House Lager pulls inspiration from the numerous country lagers, or landbiers, found in Franconia. It’s sweet and golden with a full malty body that comes from using a traditional German malt variety. A special beer for year-round enjoyment.
View: Beers | Place Reviews
Reviews: 147 | Ratings: 524 | Log in to view all ratings and sort
Reviews by sethmeister:

Scent is yeasty and doughy fresh bread, light fruit and a hint of leafy green hops.

Taste is fresh sweet doughy bread and light bread crust. Apple, pear. Lemon. Hint of honey. Clean dry finish. There's a touch of bitterness but only enough to balance the sweetness of the malt.

Mouth is lightly creamy with a crisp carbonation and a dry finish.

Easy drinking. well made and quite satisfying Helles lager. Hard to drink only one of these.

this is about as good as basic craft lager gets. this one a little more german than most of the other yellow lagers american brewers are putting out, more of a traditional style helles beer, they have done an excellent job with this. the pour is beautiful, sunshine yellow like a crayon, with a fluffy and lasting white head. rising carbonation makes it look very much alive. the nose is german lager yeast, a little grain sweetness, and a sort of odd candy complexion. my friend described it as yellow runts candies, you know those little banana shaped things. i didnt agree until the taste, its decidedly there up front, not so much sweet as it is a hint of artificial banana. i dont dislike it in the least though, it must come from the yeast, and very soon it is done, taken over by a rush of fresh pale barley malt. this is hoppy too in a very classic way, not sure the varietals, but they are there for sure, bitter enough, but more of a fresh grassy wet thing. good depth of flavor for a pale lager. i am always so impressed with overall quality when i drink beer from these guys, thanks to my homie for sending this one out from the east coast. cheers brother!

Poured from the can into a Libbey style pilsner glass.

Crystal clear, and a dark golden body color with good amounts of pinhead carbonation rising throughout the middle. Head is fluffy and slightly soapy with a big bleach white appearance. Settles to a slightly bowled puck while settling. Excellent looking lager.

Pasty and sticky aromas make for solid lager flavor and a mild malt sweetness. Very subdued hop aroma, clean and possibly a touch of fruit. Otherwise, basic and solid without any faults on the nose.

Palate goes for niceties. Slightly wet bodied even for a lager, but much of the flavor makes up for it. Light breaded malts, and a touch of slight sweetness in the mid palate. Good carbonation and mild sensing hop with a neutral angle. Finishes with good bakery bread and almost toasty qualities but more bread dough flavor and senses.

Sampling a cold 16 oz can poured into my mug. Wanting something clean and simple and tasty.
Beer pours a bright clear golden color with several active streams of carbonation rising to the surface. A bleached white frothy head of 1 cm foams up and fades to almost nothing soon after the beer enters my glass.
Aroma is some biscuity malt and also some grainy notes too. Generally sweet and malty with a little bit of spicy hop character.
First sip reveals an average body with crisp texture and fine tingly carbonation. An easy drinking beer that seems to be just about right for the style.
Flavor is some sweet grainy malt and a bit of biscuit note with a little light fruitiness too. There is a bit of a spicy hop bite that comes in on the finish and this lingers for just a few seconds after the swallow.
No alcohol hint and this is an easy drinker with good flavor. Nice, clean and no flaws. An enjoyable brew that Im glad to have and will buy again for those times I crave a tasty and simple brew or want to have quite a few.

My apologies to T. S. Eliot, but for The CANQuest (tm), it is not April that is the cruelest month, but instead, July. My beloved Pops passed on 28 July 2001, following an extended illness which led to three weeks in the hospital to the day before he passed. His nickname was "Jack" and while he was not much of an imbiber, tonight is dedicated to his memory. R.I.P., Pops.

Another 16-fl. oz. beer this evening! The Crack! shook the heavens & the inverted Glug brought forth two-plus fingers of foamy, soapy, bone-white head that quickly fizzled into wisps. Color was Yellow-Gold (SRM = 4 - 5) with NE-quality clarity. While this normally summons forth The Gelt Gang of Croesus, Midas & Mammon in a raucous squabbling over each wanting his own taste, tonight, the celebration was more subdued. I was allowed the first sip & then each took a patient turn. That NEVER happens. We bowed to one another & they disappeared, off to their next golden stop, while I CANtinued. The taste was clearly of German Lager origin. Mouthfeel was soft, light, an ethereal presence. The taste had the honey-like sweetness that is the trademark of a well made lager, along with a light grassiness and a definite biscuit malt presence. Finish was in that netherworld between semi-sweet & semi-dry. Yes, it is! No, it isn't! Back-and-forth, ad infinitum. What do you do when you CAN't decide? Give it some numbers, hit "Submit" & move on! I would stuff a cooler with this stuff!

An extremely well made lager. Very clean and soft and drinkable. This taste like Old World lagers from Germany. If only all domestic lagers could be so good. Loved it.

Canned 02/10/16, so exactly two weeks old. I was more excited to drink this than I'm sure most are, probably because after I read the description on their website, I realized I could have a truly unique and very German beer but didn't need to fly to Europe. Landbier! While I'm partial to beers of this style, I think it's fantastic and very well-crafted. Fruity with lots of bready malt and a pleasant finish. A hint of hops. Balance is key here. One of the few beers I don't mind being filtered and clear. Golden-yellow with a huge, thick, frothy white head. Very refreshing. The kind of beer I could have several liters of in one sitting. Good-looking 16oz. can and a killer price! ($9.99 for a 6-pack of 16oz. cans!) This will become a staple in my fridge. For the style, you can't beat it.

Cheers to Goblinmunkey7 for the can

A: Bright, medium gold with some straw highlights - unexpectedly not crystal clear, some chill haze instead - pours with a medium-large, fluffy white head, gradually fades to a wispy cap, leaves streaks of lacing

T: Chewy bread yet also refreshing - malts are center stage, with some freshly baked bread, light biscuits, and some crackers - pale grains, just a touch of toast - bread dough - cereal - light sweetness throughout - more dimensions to the bread flavor come from the yeast, which adds a lightly spicy character and some hops, which are lightly grassy - some lightly fruity esters - finishes mostly clean and crisp, just with lingering bread, quite literally like I just took a bite of bread

M: On the light side of medium, medium carbonation, smooth to an extent but with a somewhat crisp finish

Everyone knows that beer is liquid bread. That being said, House Lager is one of the breadiest tasting beers I have ever had. I can't get over how bready this is. The somewhat neutral, lightly sweet flavor would go well with just about anything. Despite being their "House Lager," this is actually a little different than most things I've had from Jack's Abby. It's worth a try.

O - This is a delicious beer. Doesn't knock you over the head but the flavors are perfectly balanced. Would enjoy this again anytime.

Had on tap. Pours clear, gold in color with 1/4 inch head. Taste is grain, toasted malt, and corn. Light bodied, sweet, with moderate carbonation. Makes for a tasty and clean lager. One I would get if I wanted the style, but I do prefer others.

Poured into a pint glass, a clear golden yellow color yields a soft foamy white head. Carbanotion is visible. Excellent retention on the head.
The nose is clean at first, however, a grainy sweetness from the malt soon manifests itself. There is a light floral aroma, from the hops, that supports the mostly malt forward nose.
The taste is malt forward with a soft and smooth texture. There is a subtle sweetness, however, a touch of floral and grassy hops impart a perfect balance; a gentle spice without bitterness. The finish is dry and smooth.
Medium bodied, balanced and with a pleasantly soft texture. Clean, yet with lots of character for a lager. Easy to drink.
I’m a big fan of Jack’s Abby, and am happy to know that they are around to provide the opportunity to taste craft lagers that are authentic and great representations of traditional styles.

Overall, tastes like a Genesee Cream Ale. Very disappointed in this beer, I expected more from this brewery.

t: taste is as clean and crisp as the aroma. there is a mild caramel sweetness up front that fades into some grainy malty tastes. the lemongrass is present as well, which helps to balance out the malt - however it only harmonizes, and doesn't really act on its own as a flavor (which i'm digging). there is a slight berry sweetness in here as well towards the end along with a nice grassy flavor. this is a real nice tasting beer

o: i am loving this. its extremely smooth, yet has a great flavor and is really easy to drink. a tad on the sweet side (i'm glad to see the malts coming forward). this beer can be enjoyed by a seasoned beer geek or a beer novice. its one of those

Have zero idea why this beer gets such good reviews. I honestly felt like I was back in Sydney, NSW drinking piss beer like Tooheys New or NT Draught. Not good, yo.

Quaffable, Comfort, Simple, Pleasant
Sometime I just want a beer, nothing showy or over-the-top ... just beer. This is what Jack’s Abby has done with their House Lager, dubbed a “landbier” or “country beer” inspired by examples from Franconia. With each sip I realize it’s showy because the crispness is off the hook. It’s over-the-top in drinkability, too. Oh well. This is a beer you want to bathe in; the German malt and the subtle hopping are sheer heaven. [Jason]