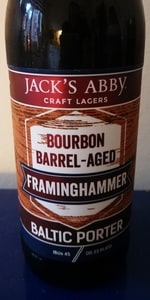 4.37/5  rDev +0.9%
look: 4.25 | smell: 4 | taste: 4.5 | feel: 4.5 | overall: 4.5
Pours with a lightly tanned head that has a modest volume which is mirrors in its medium leaning thin collar. Lacing doesn't hold, but provides a visual across the glass each sip. Nose is a lightly fruity coffee with the whiskey barrel providing some toasted wood and whiskey bite.

Flavors start with a dark brown sugar to molasses earthy sweetness quickly backed and cut by a whiskey spice and some dark fruit tang. The flavors hold nicely to the finish, without a whole lot of evolution, though the roasted malt seems more prevalent later in each sip. The beer has an easier-than-ABV-indicates feel to it, so the Baltic porter base doesn't feel weighed down much by the barreling.

Reviewed by mkh012 from Colorado

Pours near-black with a persistent ring of tan head.

The nose is dark chocolate, caramel, and fig.

The mouthfeel is light to medium for the style with a lightly dry finish.

Taste is very good - doesn't blow me away. I love bourbon, don't love when it is too noticeable in beer. This works - you can feel it's presence, but it is not overwhelming.

This is an outstanding beer! Thick, foamy head is beyond compare, what all beers should have.

This last is interesting since a Porter is usually/generally an Ale, vice a Lager. That said, I am all for Lagering! The best type of Hefeweizen, IMHO, is one that has been fermented under Lager, vice Ale, conditions. Doing so causes my beloved clove esters to become forward, surpassing my less-appreciated banana esters. Let us hope that Lagering brings that level of success to this beer!

I am taking this portion of the horizontal VERY slowly, one beer per day, so as to both savor each one & to ensure that I will be capable of going to work at some point. Night shift has been a real eye-opener! Zzz.

Speaking of an opener, I had to use a Bottle opener for the first time in quite a while to Pop! off the cap on this one. Zounds! No sooner was the cap off than I could smell the bourbon! I then started a slow, gentle, C-Line pour into the awaiting glass to keep things moving. It evinced a pseudo-cascade that formed two-plus fingers of deep-tan/light-brown head with very good retention. Color was Very Dark Brown to Black/Opaque (SRM = > 34, < 44), allowing cola highlights to be seen at its edges. Nose was redolent with bourbon as I leaned in for a better sniff, I mean, inhalation. Mouthfeel was big, full, thick & creamy, like a dollop had been scooped into my mouth & onto my tongue. I was really amazed by the flavor! I reviewed the base beer from a CAN (!) yesterday & where that had sharper, bitter flavors, this was much sweeter. I really tasted the brown sugar much more prevalently than in the base iteration and the chocolatiness was more like fudge than Baker's chocolate. Gone were anise, treacle & charcoal smoke as well as the dried, dark fruits. In their place(s) was the taste of liquor as well as a light woodiness. I am still not a huge fan of Bourbon, although Rye is my liquor Achilles Heel, but the taste of it in beer is simply phenomenal, this being no exception. Finish was dry, but not at all bitter. It does require that you like the taste of Bourbon, though, as it was simply prevalent throughout. Mmm. YMMV.

Pours black, lighter brown head 2/3". Aroma, wow I didn't think it could be this good. Instead of a massive blast of bitter dark fruit and booze, this one coaxes it all along by leading with bourbon that saturates the dark fruit notes to become smooth and giving another level of depth instead of bitter blech face from the booziness and spoiled prune notes.

Taste also delves into bourbon smoothness, a hint of vanilla keeps the smooth train running the tracks on top of that licorice and dark fruit like base that tends to dominate baltic porters. Nice little hint of smoke to it. Mouth feel does a good job of not being overly sludgy or bitter. More of a caramel and bourbon presence than dark fruit bitterness, which is a total plus. At times I thought i was getting double barrel like notes, bourbon and rum, but I think its just the vanilla barrel aspect and the yeast together. Best baltic porter I can think of.

4.39/5  rDev +1.4%
look: 4.25 | smell: 4 | taste: 4.5 | feel: 4.75 | overall: 4.5
A: Dark almond head is thick and cushy, at two fingers high displaying a very strong retention and porous surface. A full sheet coating is left behind. The pour was viscose, motor oil consistency, thick, bold, with coffee-auburn highlights from back lighting. . A very slow and mesmerizing rise of micro-effervesce.

S: The nose was full of rich bourbon highlights and brown sugar sweetness. Toasty and sweet caramel comes with coconut-vanilla notes. Toffee and smooth brown malt backbones gives this a full scent, well balanced, with a generous strength from the four roses bourbon barrels. Very good strength with a round out of burnt chocolate that was soft and subtle on the fade.

T: The flavor was as thick and you imagine from the pour. Syrupy backbone of malts combine with vanilla-coffee flavors gives this a rich and bold tasting. The bourbon influence is generous and strong, along with burnt chocolate, roasted walnuts, coconut and a sense of soft charred ash. Smoked caramel malts are sweet and generous, along with some roasted barley gives this as smoky touch. Juicy plums and other dark fruit gives this a nice touch along with some roasty charred coffee-bourbon fade that lingers gently on for an appreciative amount of time.

M: Mouthful is thick, syrupy and slick on the tongue. Lush and deep with a ample full body and warming of bourbon and roasty silty grounds being left behind on the tongue. The carbonation is soft, adding to its velvety smoothness.

O: Overall a ton of bourbon influence, roasty vanilla-coffee flavor and a ample full syrupy body makes for an exceptional experience. The flavor and mouthful being the true highlights and standout here, bold, beautiful and a much rewarding experience from Jacks.

Smell is roasty with notes of coffee, oak, bourbon, vanilla, and hints of smoke and cured meat.

Taste is intense but still delicate with notes of bourbon, oak, vanilla coffee, very dark chocolate, rum raisins and a hint of booze and bitterness.

Reviewed by Amendm from Rhode Island

The smell is a balanced blend of chocolate, Bourbon and coffee with a roasted malt kick and caramel malt sweetness (almost). These flavors are featured in the taste.

The taste begins with bakers chocolate as Bourbon builds yet does not overpower, malty richness and milk chocolate smooth out the alcohol bite. Semi-sweet with moderate bitterness from roasted malt. stone fruits almost add sweetness. The finish is warm and slow, faint hops add a peppery bitter boost to the roasted character. Bitter roasted malt taste lingers. coffee is much bigger in the aftertaste than the smell.

Medium full bodied, evenly carbonated throughout. It only takes a few sips for the booze to fade away into an amazing smoothness, bolstered by sweet and roasted malt and brilliantly balanced. A big beer so well balanced and smooth, a good gateway BBA dark beer for novices, and a must try for fans of the style.

Reviewed by HellsRanger from Pennsylvania

4.42/5  rDev +2.1%
look: 4.5 | smell: 4.25 | taste: 4.5 | feel: 4.25 | overall: 4.5
This is a superb brew which pours a slendid dark brown with little to no light thru and very nice foam to go along...
The aroma is very nice with the malts coming thru with the perfect presence of the bourbon and some slight chocolate/vanilla flair to the old factory.
As for the taste...it is outstanding . Can't say much more other than it never changes thru the whole drink...it is true thru and thru.
The feel was just as great as the taste...smooth, delicious, and tasty. Say no more, other than a MUST DRINK!!!!

Aroma is a little muted. Light notes of dark chocolate, and a good berried fruit. Light woody character as well.

Palate is rich. Thick velvet mouthfeel, with a decadent dark chocolate mid palate. Lots of dried plums and dark prune like flavors, mixing with a good portion of dried cocoa. Slight hint of pine hop sting as well, with some prickly light heat on the finish.

Quite an impressive take on a Baltic porter.

Taste well going to be hard to beat that wonderful nose and it doesn't really beat it but it is great too. Roasted and toasted malts soft and not quite as sweet molasses goodness as the nose but its nice. Hints of the peat, vanilla and oaken bourbon barrels imparting there charred goodness of so subtlety. Not quite as good as the nose but very noce non the less.

Mouthfeel is weird this is a big beer huge and wonderful flavors but mouthfeel seems lighter then it should maybe making it too dangerous as you think you should throw this big beer back instead of sip any enjoy it.

Overall picked this up in Mass damn wish I had know it would of been so fucking good or I would of bought several :( oh well the joys of buying shit while on vacation. This is wonderful perfection please buy a few if you can. Nothing extravagant just perfect blended perfection.

4.28/5  rDev -1.2%
look: 4.25 | smell: 4.25 | taste: 4.25 | feel: 4.5 | overall: 4.25
Poured from half liter bottle into an English pint glass. It pours ink black with a half finger of creamy, khaki-colored head and a thin but creamy sheen of lacing. It's a really pretty pour. On the nose there is roasted malt, molasses, brown sugar, oak, vanilla, and earthy, burnt char. The bourbon is subtle but unmistakable. The taste opens with sweet roasted malt, brown sugar, and molasses but as it warms there is much more: nutty peat and char and warming notes of bourbon. The flavors blend magnificently. Perhaps the best attribute of this Porter is its mouthfeel: viscous and creamy, it drinks more like a big Stout than a Porter. If anything, it feels heavier than its 10% ABV. Overall, this is as good a Porter as you'll find. Bi flavor and an amazing mouthfeel. I'm so glad to be able to buy this beer locally.
Aug 03, 2019

The bourbon is prominent on the taste, but the oak and vanilla notes complement the toffee and chocolate flavors perfectly.

This is a perfectly balanced beer, which is tough to do at the high ABV, but the brewery is clearly world-class. And they executed this magnificently.