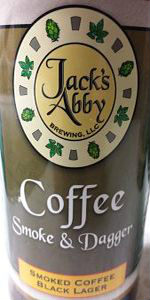 A -- Dark dark body, brown verging on black. Medium brown highlights. Thin tannish head. a little bit of lacing (although the snifter doesnt produced a lot of it typically). Nice halo around the edge and a little, wispy retention.

M -- Lighter than one would think.

No date that I can see but this was just released in bottles maybe last week or the week before at most?

S: Strong heavenly coffee aroma. Light smoke sticks to it a bit but nothing over the top. Mildly earthy with just a hint of caramel sweetness.

T: Smoky, yes, with a decent bit of roasted coffee melding with it. Coffee fades, leaving just some acrid smoke. Some chocolatey sweetness helps perk up the bitter smoke and coffee. Aftertaste is mild coffee, surprisingly not bitter here. Like coffee with sugar in it.

O: Smoked beers are easily my most hated style. This one has a decent sweetness to it to help balance out the acrid smoke (like the base beer). The addition of coffee helps even more and adds some nice complexity at the same time. I feel that the coffee could be a little stronger and it would really set this brew apart, but Jack's Abby isn't huge on making adjuncts over the top so I understand.

Yum yum. I love my coffee beers, maybe a bit more than most. Served from the bottle and poured into a pint glass. The appearance is a very dark brown to black with a minimal hazy, pale head. The aroma of coffee is overwhelming. It smells like a light to medium roast coffee was used. I'd guess an African blend. To me, the aroma is very close to a good iced coffee. Not much smokeyness to it, which could have been a bit more present if something like French roast were used.

The taste is a very strong coffee, and as noted, a lack on the smoke, other than a faint aftertaste. But a great lager still.

Mouthfeel is very carbonated, and the aftertaste dissipates quickly.

Overall, I really enjoy this beer for the style. It's one of the better coffee beers I've had and isn't an overpowering stout. Better than regular Smoke and Dagger too!

From the new batch, poured from the bottle into a Tree House snifter. Bought the coffee that they used from Red Barn also, but that's for coffeeadvocate.com. Pours nice and dark, smell of roasted coffee and faint smoke. About a finger head, and that was from a pretty vigorous pour. No retention to speak of, no lacing either. Taste is awesome, roasted coffee up front, mild smoke (not nearly as much as i would like, but this isn't targeted to a rauchhead like me.) Very easy drinker, and a definite upgrade from the regular version. I don't know how often they are planning on bottling this, but definitely pick one up!

An amazing base beer made not-so-good with Red Barn coffee. Tastes similar to MBC's Mean Old Tom in the sense that the coffee flavor is akin to drinking a drip tray under a press pot in a hotel.

This is the first time a JA beer has left me disappointed.

Thanks, angrybabboon! Note that I have NOT had the regular Smoke & Dagger upon the time that I consumed this, so I have nothing to compare this to. Poured out of a 500ml bottle into a snifter. No bottling date, but I got a bottle of this in late December and had it about a month later.

Dark brown in appearance, although when held away from the light it looks almost completely dark. Still, you can see through this, and there's plenty of playful, bubbly carbonation at first along with an effervescent head that dies down not too long after the initial sip. Pretty light bodied in feel, which is no surprise given the low ABV. Doesn't look like your typical lager, but it's not anything too remarkable.

Things get a little bit more interesting at the nose, with neatly roasted notes of cold brewed coffee, caramel, black pepper, as well as some very light smoky notes. Compared to the Smoked Maple Lager I had earlier in the evening, this is very mild, even as a tribute to a rauchbier. Some pine citrus lurks underneath the strong coffee and caramel, but otherwise there's not too much else to write about. Definitely pleasant, especially for my first ever coffee lager!

Yeah, that hits the spot - it's not smoky by any means, but it definitely retains a refreshing, crisp, and slightly roasted and zesty character throughout. THIS is what Coffee Bender from Surly should have tasted like - rather than burnt coffee grounds, as in the former, this delivers a light powdered espresso character that dissolves calmly into the caramel, slightly cracker-like profile of the beer itself. There's an apple, pine zest throughout, but it's subtle as it melds with the coffee profile rather distinctly. While, again, there's really not too much going on in the beer otherwise, it still is easy to drink and mellow as a result of the light richness added on by the coffee and light smoky profile. Well carbonated, and very crisp - doesn't demand too much of an effort to consume otherwise!

It won't change your life, but it is a good take on getting a coffee beer and making it seemingly cleaner and more light bodied in character. I do wish there were more smokiness and representation of the yeasty profile at hand - it gets a little drowned out overall. Can't say its my favorite from these guys, but can't say there's anything particularly wrong with it.

Coffee Smoke & Dagger from Jack's Abby Brewing
Beer rating: 87 out of 100 with 183 ratings