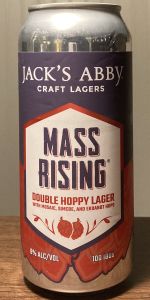 Notes: In the spirit of our local history we are revolting against the status quo. We are writing our own story by fueling the fire surrounding extra hoppy beers. We infuse Mass Rising with increasing amounts of American hops during the kettle, hopbock and dry hopping processes. Together, we have taken a journey to redefine the term 'lager.'
IBUs 100 IBU
View: Beers | Place Reviews
Reviews: 214 | Ratings: 1,561 | Log in to view all ratings and sort
Reviews by mhksuccess:

Pours a clear bright gold, nice foamy white head with a good amount of lacing. Smells clean. Seriously! Smells of clean fruity and mild crisp malt which transcends through aroma and feel. So easy to drink. Bright, flavorful without being obnoxious, clean, crisp, and even balanced somehow despite its 100 ibu. I could drink this every day. Cheers!

500ml bottle purchased from the brewery. Poured into a pint glass.

A- Pours a translucent golden with about a half finger of frothy white head that recedes at a moderate pace leaving some light spidery lacing, not overly carbonated.

O- This was another great DIPL from Jack's Abby that is easily up there with Kiwi Rising, however I think I prefer Kiwi slightly more with the more intense citrus presence. The 2nd Anniversary is more balanced and has a great drinkability. Despite being at least a few weeks old the hops in this beer are holding up great. I hope Jack's Abby continues making this beer and I definitely recommend checking it out.

Bottle from Greg. Guessing this is roughly two months old, so I figured I'd get to it ASAP. Served in an Alchemist pint glass.

S - Hop character seems to be quite varied, with elements of tropical fruit, citrus zest, cat pee, floral and earth notes, a touch of dank. Malt character is significantly more pronounced than Jack's Abby's other hoppy offerings, and some doughy and sugary supporting the hop melange. A tad understated, although perhaps it's fallen off. No discernible alcohol.

T - The taste has a bit more punch to it, and is largely dominated by the mixture of sweet, doughy, and biscuity malt flavors mixed with tropical and citrus fruits. There's some nebulous floral and grassy notes in the periphery, but the more earthy flavors have fallen by the wayside. Again, no alcohol, and surprisingly restrained bitterness considering the bottle advertises 100+ IBU.

M - Medium-full body, pleasant moderate carbonation, soft texture, with a dry, crisp finish. Again, nary a trace of booze, but only some lingering hop oils and resins.

D - A nice brew to be certain, but I was slightly disappointed considering the pedigree. The hop character was a bit muddled rather than complex, and I was also hoping for more hop kick and a bit less malt. Well-executed and quite tasty, as all Jack's Abby brews tend to be, but I'd still prefer Kiwi Rising or Hoponius Union.

Poured into a 13 oz tulip glass, bottled recently for sure. Pours a straw yellow, with an enormous billowing white head that leaves incredible lace everywhere. Smell extremely tropical and floral, tangerine, pineapple, mango, grapefruit, and flowers. Taste is even better, everything in the nose, but even more assertive. Citrus, flowers, and grapefruit in the aggressive finish. Body is medium, perfect carbonation, a little dry, and very easy drinking. This is scary good, WOW!