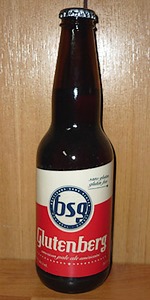 Notes: A savoury concoction with citrusy notes, this beer perfectly showcases the brewery’s versatility. Its orange and grapefruit aromas softly temper the straight-up character of American hops by endowing it with a slight touch of bitterness. The result is a delectable, balanced, resinous and full-bodied beer.
View: Beers
Reviews: 12 | Ratings: 45 | Log in to view all ratings and sort
Reviews by woodychandler:

I have been meaning to get at my remaining gluten-free beers for some time and with today being another installment of New Beer Sunday, I am making mine New Gluten-Free Beer Sunday. I picked up a mixed 4-pack of Glutenberg CANs in support of The CANQuest (tm) during my most recent New England foray and I am curious to give them a whirl.

I feel as though I am really drinking healthy with these beers! They just keep getting more & more interesting in terms of their ingredients. The uniqueness, coupled with the relatively low ABV, makes me feel like I CAN do this all day. Except for the idea that they seem to act as a diuretic. Man, I usually do not have to go this often!

Onward! The tank is empty, so I am ready for a refill. They all seem to fight me on the Crack!, which is actually okay by me. I have ways of dealing with the CAN in return, namely, an inverted Glug. I poured as much as I could from the 16-fl. oz. CAN before I simply had to back off/down or risk overflow. This all resulted in two fingers of dense, rocky, bone-white head with very good retention. Color was a beautiful Golden-Amber (SRM = > 5, < 7) with NE-quality clarity. Enter The Gelt Gang of Midas, Croesus & Mammon, but they seemed CANfused & disoriented. I suppose that G-F beers have that effect on us all. Nose had a grassy hoppiness, more suited to a Pils than an APA, but I am not about to quibble at this point. I want to find things to like in these beers, not to simply dun them because I am not a member of their intended audience. Mouthfeel was medium. The hops were certainly the star in this one! Very grassy, perhaps Noble hops, and underlain with that buckwheat sharpness that is the Achilles heel of these beers.

Well, buckwheat & treacle/molasses, but the latter is not present here. Still, if they are this close, I CAN't help but wonder if either/both could be left out as well as exchanging the ale yeast for a lager & making a Pils. This would rate on the low end of an APA, but when taking into account that it is a G-F beer, this would rank pretty high on my list, if I had to be relegated to dinking such things.

Back to the review. It was not as hoppy as some APAs that I have reviewed recently, but I have also argued that the line between APAs & AIPAs seems to be blurring. That being the case, I want to CANtinue to advocate for this beer. It was moderately hoppy, slightly sharp/bitter, but as a self-described, self-avowed hophead, I CAN hang with it. Finish was semi-dry to dry, with a light sweetness on the extreme finish, probably from the syrup & sugar.

ReCANpping: It seems to me to be the Red Ale & the Ameri[CAN] Pale Ale (APA) that are the winners thus far with the AIPA upCANming.

DATE: February 13, 2020... OCCASION: six weeks of gluten-free living and still going strong... Hop Devil nonick... a half-fingered off-white head sits atop a clear, golden yellow body flourishing with bubbles... hay, grapefruit, bubblegum, pear and apple, cracker and tea--it's a pleasant, aromatic, light and sharp with a tinge of syrup... not as a pale ale usually sits, but also not a beer whose aroma will turn you away... welcoming at the mouth, light to medium-bodied, slightly chewy with a buzzing, bubbly mouthfeel that finishes dryly... a candied flavor prevails, with sweet sugars, tart fruits, apple, pear, some pineapple or citric hop floating in and out, and a bit of metallic ping late... all told, this can stand in for an easy-drinking malt-based beer on many nights, the kind that has hop flavor to offer... definitely a beer I will drink again, at least until my experiment is over...

Can: Poured a clear bright golden color ale with a medium size foamy head with good retention and some good lacing. Aroma of light hoppy notes with light grainy malt notes. Taste is also dominated by light hoppy notes with some grainy malt notes. Body is about average with good carbonation. Not bad but fell a bit short on the hops flavours in my opinion.

A: The beer is crystal clear amber yellow in color and has a moderate amount of visible carbonation. It poured with a quarter finger high frothy white head that died down, leaving a patch of bubbles on the surface and a collar around the edge of the glass.
S: Light aromas of citrusy hops are present in the nose along with notes of sorghum.
T: The taste has moderate flavors of sorghum along with hints of citrusy hops that occasionally peak through. There is a light amount of bitterness.
M: It feels light-bodied on the palate and has a moderate amount of carbonation.
O: The citrus aromas in the smell do not make this a dead giveaway as a gluten-free beer; it seems that the hops also help to lessen the astringency associated with the sorghum to make this more in the way of palatable to people not normally accustomed to gluten-free beers.

341ml bottle, part of the latest gluten-free beer lineup to hit Alberta store shelves. It's still strange to me to see nutritional information on a craft-beer-esque looking label.

This beer pours a clear, medium golden amber colour, with a single, very skinny finger of loosely foamy off-white head, which dissipates quite quickly, leaving some string bean islet lace around the glass in its feeble wake.

The bubbles are a bit frothy, and generally well behaved, the body a commendable no-frills medium weight, and more or less smooth. It finishes just off-dry, the hops persisting in their support of the sassy non-barley malt.

Interesting. At first gulp, I was almost repulsed. However, after a few more tentative acclimatization steps, I was settled in. This is fairly reminiscent of a sweet rye ale, and a well hopped one at that. The various alterna-grains, so saddening in my previous beer-based exposure to them, are brought together here to create something at least a bit more tasty and challenging than the average pale ale out there. The various unusual flavours can't be discounted, but they are far from unpleasant, making this a keeper. If I was a celiac - had to be said.

Served from the can in a Trooper shaker pint glass.

Part two of my four-part exploration of these beers ventures into the world of gluten-free pale ales. This stuff pours a clear straw topped by a finger of lightly off-white foam. The nose comprises mild pine and waxy mixed greens atop a slim slice of biscuit. The taste increases the intensity of the grassiness, especially the chlorophyll-laden bitterness. There's also a bit of tea leaf lingering through the finish. Nothing else really makes it through to my tastebuds. The body is a hefty light, with a light moderate carbonation and a drying finish. Overall, the grass-and-tea bitterness just didn't do it for me, especially with nothing to balance it out. This stuff is miles better than the Blonde, but still not my cup o' meat.

The hops here seem pretty nice; well-within the style of American pale ale and almost leaning toward an American IPA (along with bitterness which seems higher than the 35 IBU stated). Lots of citrus and tropical fruit with earthy pine and grapefruit pith on the finish. Malt character is barely there at all, with sugar and syrup filling in for the sweetness. Strange aftertaste.

Very thin bodied. I imagine it's difficult to get a good body out of alternative grain sources. Moderate carbonation. Drying finish.

I'm going to give this one bonus points here since it's probably the best gluten-free beer I've tried but it's not something I'd drink given the choice, though I'd call it drinkable for sure. If you know someone with a gluten sensitivity I would recommend this beer to them; otherwise, as a drinker of beers brewed with barley, you probably won't be interested.