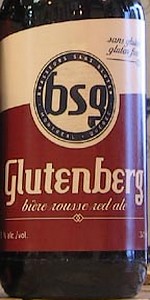 Notes: Proudly echoing British brown ales, the Glutenberg Red stands out by the great complexity of its creation and taste. Brewed using two types of chestnuts, each requiring a specific roasting method, this unctuous beer with a roasted nut fragrance reveals unique flavours of caramel and coffee.
View: Beers
Reviews: 13 | Ratings: 44 | Log in to view all ratings and sort
Reviews by woodychandler:

I have been meaning to get at my remaining gluten-free beers for some time and with today being another installment of New Beer Sunday, I am making mine New Gluten-Free Beer Sunday. I picked up a mixed 4-pack of Glutenberg CANs in support of The CANQuest (tm) during my most recent New England foray and I am curious to give them a whirl.

I feel as though I am really drinking healthy with these beers! Good thing, since once more, the tab & tongue seemed to fight me on the Crack! I debated on CANducting an inverted Glug, but given that it was a 16-fl. oz. CAN, I decided that discretion was the better part of valor. Even so, a routine Glug saw a LOT of foaming coming up in the glass, eventually forming two fingers of dense, foamy, light-tan head with decent retention. Color was Brown to Dark Brown (SRM = > 22, < 27) with NE-quality clarity. I get why they were referring to it as "Red", but it was a sort of chestnut-reddish color, relegating into the "Brown" range of the SRM spectrum. Nose actually smelled very nice & would have said "malty" except that I would be roundly laughed at. Really, though, it was very evocative of a standard Amber/Red Ale. Mouthfeel was medium, fuller than other G-F beers that I have reviewed. The taste had a light sharpness, undoubtedly of the treacle, I mean, molasses. Even then, it was offset by a sugary nuttiness that really helped to cut some of that harshness which seems to be a hallmark of G-F beers. This was a really brilliant commingling of seemingly disparate ingredients. I have to admit some trepidation when I CANscribed them, but it is working for me. Finish was semi-sweet and not much removed from a lot of Amber/Red Ales that I have reviewed in the past. Admittedly, I am not the intended audience for this sort of beer, but I figure that I like it, then the celiac set will really dig it. I am a neo-hippie in that I will try anything once, man. This one is recommended by The CANQuest (tm)!

5% ABV. 473ml silver aluminum can. Served cold into a stangenglas in NYC.

Reviewed live as a red ale per the label.

Overall, it's a pretty good looking amber, with nice carbonation. I'm looking forward to trying it.

Aromatic intensity is below average. Not a real evocative aroma overall.

No yeast character, alcohol, or off-notes are detectable.

TASTE: Amber malts provide the base...and that's about all there is flavour-wise. A hint of bread char, some modest sweetness...there's just not much going on here at all, and it's painfully shallow. I look for chestnut, and I guess I find it when prompted.

The ingredients list on the can seems more like a marketing ploy than a genuine reflection of how this was brewed; maybe they used millet quinoa and buckwheat, but it was likely in such small amounts it had no effect on flavour.

OVERALL: Those who actually have celiac disease diagnosis as a result of getting a biopsy (not those who merely feel bad after eating a bagel) would do well to pick this up for rotation in their fridge. But the gluten free diet fad crowd should stop aching for attention and just drink the real beer they can actually physiologically handle. Drinkable and enjoyable, but not a beer I'd have again.

DATE: February 29, 2020... OCCASION: unwinding after the start of Lent and a good, busy week... pours a dark brown, red body with active bubbles building a creamy, off-white head that keeps its quarter-inch head... aromatic roasted millet, candied caramel, bright nuttiness and a hint of sweetness... approximates a red with its strong aroma... its palate is smooth, lightly textured, grainy yet agreeable, with a soft, buttery finish... its flavor is a bit syrupy, with the caramel, prunes, buttered biscuit, toffee, blunted hops and some medicinal aspects... strangely not the sum of its parts, this doesn't approximate a red--and I am okay with that.... instead, it creates its own earthy milieu, adding enough complexity along the way to make it worth seeking out again... tough to make a real red without malt, but this will serve in the meantime...

16 oz can with a March(?) 2020 BB date stamp on the top of the can's side.
This has a clear, dark reddish-brown body and a head that quickly reduces to a ring.
The aroma is exceptionally appealing for a gluten free beer, and the flavor is exceptionally rich and complex. There are suggestions of both nuts and dried fruits. Quite nice on its own merits.
Overall: a tasty and complex brew that's well worth a try.

Not bad for a gluten free beer. Tastes mostly like a red ale, with a bit of rounded maltiness and some gentle hoppiness. The only problem is a slight sourness typical of gluten free beers. I thought that the absence of sorghum might mean this one wasn't sour (it's only millet and buckwheat), but oh well- I guess the millet does it.

The beer looks fine. It smells okay, maybe a bit soapy but more or less like a red ale. The flavor is pretty bad: cloyingly sweet, boozy (at 5%??), oddly spicy, and not at all like a red ale - much closer to a winter warmer with the chestnut flavors. An unusual beer and unfortunately not a very good one.

Can: Poured a clear brown color ale with a medium size foamy head with OK retention and small lacing. Aroma of light grainy malt base with dry caramel notes. Taste is also a mix of dry caramel malt with some grainy notes. Body is about average with good carbonation. Standard red ale with limited hops and more grainy malt base than usual due to use of alternate grains.

A: The beer is crystal clear dark garnet red in color and has a light amount of visible carbonation. It poured with a short off white head that died down, leaving long wisps of bubbles on the surface and a collar around the edge of the glass.
S: Light aromas of nutty malts are present in the nose along with notes of cola.
T: The taste follows the smell and has bits of sweetness from the candy syrup and molasses.
M: It feels a bit more than light-bodied on the palate and has a moderate amount of carbonation.
O: This beer has a pretty good taste for something that is gluten-free.

341ml bottle. Made with buckwheat, millet, and quinoa for grain substitutes, and some molasses and chestnuts just for fun.

This beer pours a clear, dark copper amber colour, with a measly half-finger of thin foamy off-white head, which disappears momentarily, leaving a low berm of lace around the glass.

The carbonation is on the low, but still supportive, side, the body a decent medium weight, a bit pithy, but generally smooth. It finishes off-dry, the caramel malt holding steady, with a slightly sour grainy essence, and some lingering herbal leaf hops.

Huh. Handed to me without any identifying info, I would have treated this as just another red ale (with strong Brown Ale aspirations). And, accordingly, as I wrote this review, I found myself not trying to find justification or 'real-beer' analogies. While this brewer's Blonde and Pale Ale hit close to home, this is a full-on round-tripper - and a little better than average example of the style as a whole, at that.

A dark reddish cola, a finger of tan foam sits around for a few sips leaving a collar of lace

S coco, burnt sugar, molasses, slightly nutty, smells decent but I get a hint of outhouse in the back ground that I just cant shake

M light bodied, feels flat at first but bubbles come out after a second, nutty coco on the finish

O unlike most gluten free beers I've had this one's not painful to drink, the nose leaves something to be desired but even then its not terrible

possibly the best gluten free beer I've had, doesn't that nastiness that I'm guessing is from sorghum I've been finding in other gluten frees. I've think I've had enough gluten free for a while, I'll finish on a high note

Served from the can in a Trooper shaker pint glass.

Part three of my four-part excursion into gluten-free madness heads into red ale territory. This stuff pours a copper topped by a couple fingers of ecru foam. The nose comprises menthol, arugula, dry caramel, and a touch of what may or may not be kiwi peel. The taste holds notes of green tea, light tobacco, and thoroughly watered-down caramel. The body is a light medium, with a light moderate carbonation and a slightly waxy feel. Overall, another miss from the GF camp. Only the IPA remains...

16oz can labeled at Glutenberg Red Ale in the U.S. Pours a dark amber color with a frothy beige head. The aroma is malty with a slight smoke scent. The flavor is weak with grains and burnt taste of millet. Takes some getting used to as I am not big on the taste of millet.

While this is a gluten free beer...which is better than most. It was still not the real thing.