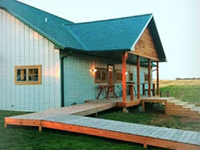 Notes: At this time, we have limited growler hours - for new beer releases and other seasonal events. Look for announcements on our Facebook page and our website for when we will have this service available to you.

Please contact us at [email protected] to arrange growler filling for special occasions. Include your name, telephone #, date you are interested in stopping by to fill up and how many people will be in your party. We will try to accommodate as many requests as possible.

2018:
It looks like someone changed the place type to "beer-to-go" so they could rate it. That's not really how it works... The brewery states on their website they aren't open to the public, and have no posted hours.

They only offer growler fills during scheduled special events, which are 2-3 times a year at most. Unless you've scheduled a tour with the brewery first, don't just show up as the farm is on private property.

I've actually been to the brewery and toured the farm back when you could call them up and get growler fills before they first started distributing. It was all very informal, but extremely nice that they would take time to do that if you just called up the brewery. They only had 2-3 beers on tap at the time, and are still pretty limited in their range, but they do make some good stuff. Recently they have been putting out some new seasonals with farm-grown ingredients, including their own farm-grown hops and wheat. They have over a dozen plants in the hop yard, mostly Cascade and a wild varietal native to the farm.

As of 2017, they have rebranded and have wisely started packaging 16 oz. cans. I'd stopped buying the bombers as they are pretty expensive per ounce. They used to be the only brewery in the greater Springfield area, now there are several in Springfield and more in the surrounding area (Petersburg, Cantrall). Hand Of Fate, Anvil & Forge, and Buzz Bomb are worth a look if you're in the Springfield area.