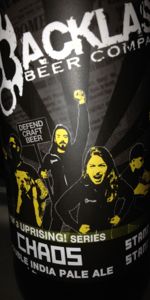 Overall Terrific beer from Backlash, first i've tried in the uprising series and I can only assume they saved the best for last.

A-Darker than the top double ipa's but poured with a beautiful top that I couldn't help but show to everyone in the room.

T-The taste really blew me away, drinkability with the chaos is through the roof. Could not believe how smooth it was with a 8.5 abv kicker.

M-Underwhelming mouthfeel, and that's the only thing I didn't absolutely love about the beer.

O-Excellent beer, so happy I was able to get my hands on two as I know there aren't many that were made. Hope others out there are able to pour one soon. Cheers to everyone over in Holyoke!

Wow, I totally forgot this was a beer Backlash made before. It's been 7 long-ass years since this was released, but it's recently been released once again by the brewery and brewed at Riverwalk Brewing in Newburyport, MA. I had thought these guys finally got their new location set up, but maybe COVID screwed it all up. Anyway, let's give this a shot. I think I had it before but, in all honesty, I don't remember, so we'll see what's up with it.

Pours a hazy (but not opaque!) orange-tinged golden color with a soapy, dense head of white foam that leaves behind some streaky lacing and decent legs as it fades to a half-finger and retains there for the entirety of my experience. Not a bad appearance, and I do like that it's actually not a haze-bomb; reminds me of, ya know, IPAs back in 2014 when this was first made!

Chaos features Citra, Galaxy, Mosaic, and Simcoe hops. This was probably one of the first commercially-available beers that I know of that featured Mosaic back in 2014, which is pretty cool. I can't think of many others in my neck of the woods anyway. The nose is pineapple, papaya, melon, and tangelo with a hint of ethanol heat and some semi-sweet caramel-like malty undertones. Actually reminds me, again, of IPAs back in those days, which is wild. I would've thought they'd update this for "modern times" but I appreciate that it seems like they kinda left it untouched. It's a little sticky and dank as well, with some hints of passion fruit and spice combining with resin and hints of tropical citrus at times.

This is super smooth and drinkable for an 8.5% IPA, and I think a lot of that has to do with how laid-back it is on the tongue. It's not overly-hoppy, but it's definitely a bold IPA in a more "West Coast"-ish tradition. In a sense, it sort of reminds me of something like 3 Floyds' Alpha King or something. The flavor is more bitter than expected from the nose, but flavors of soft mango, peach, papaya, and passion fruit build up around a nice malty core that is bolstered by fine carbonation and notes of pineapple, grassiness, and a hint of herbs. Some sticky/dank resin-like undertones in the finish that give the beer a good bit of balance, playing well with the maltiness in the mid-palate. I kinda miss beer like this. I appreciate Backlash for bringing this back. Hope they can eventually get that space they've been wanting to operate out of.

Mouthfeel is full and nicely prickly.

Not great, but pretty good and promising.

A-Pours a milky, brighter orange color. Head is thick and well formed. It's mostly white and pretty tall. Lacing reminds me of cob webs. Stringy but thick at points. After the beer settles, I can see massive amounts of detritus floating and sitting on the bottom of the glass. Globes of solid mass swirl around my tiny ocean of beer. I am into it - if it adds flavor then let that shit float around!

S-From their web page, I find that this brew uses Citra, Simcoe, Amarillo, Mosaic and Galaxy hops...what an all star cast of greens. The nose fits right into the mold of what my favorite beers smell like. It's a mutant hoppiness that has many different aspects and specific scents and all the intricacies somehow form into one glorious scent. My only critique: I love the aroma but it doesn't explode out of the glass like the best ones do.

T-The flavor is downright tasty! Every hop they used brings forth some of their own unique flavor intricacies. It's almost like biting into a tangerine that was wrapped in fresh, wet, moss (a description of which nobody may ever agree with). Melon juice Bellini. Fresh, zesty, fruit purée. Bitter papaya. God. Damn. Tasty.

O-The label says "if hops could scissor kick you in the mouth, it would taste like this beer". Bold words...If any brewery could be considered a 'Broery' it would be Backlash. Brass knuckles and flat brims litter their beer labels. It may not be my taste of labeling or visual marketing but they have consistently shown a prodigal skill set for crafting hoppy beer.

Served in a snifter at the Union Brewhouse.

Appearance: A one finger head was poured that reduced to a thin layer. It is a hazy pale orange color with some vision of bubbles coming up through the glass. Nice frothy lacing down the glass as the beer was drank.

Overall: Amazing. Alcohol hidden well. Nice blend of hops and malt and the bitterness wasn't too crazy. This keg won't last through the weekend. I'll have more in a few days.