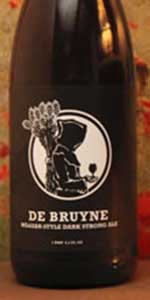 Steel Toe makes such good stuff, so consistently, that I’m pretty much willing to suck on anything they put out. So here’s this 750ML bottle, minimalist art, that I’m splitting with my wife.

The pour is a mucky smear of orange & brown paint on a kid’s fingers, though the carbonation probably wouldn’t be there. The nose is nice: dried candied apples, cinnamon, nutmeg, with an underlying handful of sweet sugar; almost slithers into winter warmer territory.

De Bruyne is a mulled treat. The spices of the nose Live Strong, cinnamon, nutmeg, set against an idyllic range peaked with sugary sweetness & plums (which I didn’t get at all in the nose). Low bitterness that churns into earth-tones dominates the middle & cuts the glucose to bearable levels. Finish is all soft, unfocused reddish fruit that blends into the gentle mouthfeel that somehow manages to come off as carbonated & wine-like simultaneously. One of the most drinkable big Belgians I’ve had.

The word foremost in my mind right now is ‘pleasant’. The second is ‘big bacon burger’ which I think would look awesome next to my glass. Either way, I likes, & am looking forward to the barrel-aged version; a very good brew.