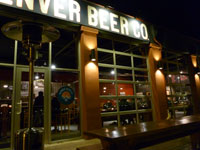 Bright lights and a good trunk greeted us on arrival. Space is very open, virtually all part of the patio thus Sara our dachshund felt very welcome. Young crowd of 20s and early 30s. Very friendly and social vibe!

Visited 8 craft breweries in the Denver area and this was my favorite. Great vibe. Beer selection was decent but the ones available were excellent. Service was decent/average but nothing to detract from the quality of beer

(#38 of 49) My wife and I stopped here to try their beers. The pub is located on a busy street among other retail, office and residential structures. The building has several overhead doors across the front that open up to a patio that has umbrella-covered tables. Hop bines are also growing over the patio which added to the vibe of this place. The interior has seating along a long bar and there are a number of tables/chairs. The brewing equipment is visible at the far end of the tasting room along with some oak barrels, and barrels were stacked at the other end of the pub too.

We ordered a sampler flight of 5 of the 9 beers that were available that day. All of them were brewed very well to their respective style and were very tasty so that we scored them in a range from a B-plus to a B-minus. The Graham Cracker Porter and the Lazy Monk Dubbel were the two that received the highest scores. Growlers, bombers and cans are available to go.

There is no food served here but a food truck was parked at the front of the building, so we decided that we needed a snack. Our food was very good. This is a brewpub that we'd definitely like to re-visit if we are ever in Denver again.

A brewery that isn't afraid to put out some odd styles. The graham cracker beer is the most popular, but is just okay. I liked plenty, but didn't fall in love with any. The packed taproom was cool. Felt like everyone was local, even though they probably weren't. Cool place.

V-Denver Beer Co. has a medium sized indoor/outdoor layout with a good patio and lots of community tables. The bar is in the center of the joint with some brewing equipment behind and to the side. There is also a barrel area in another room...I'm not sure what its like in there. The place is close to Denver's Central Business District and its always crowded with a mostly younger crowd.

Q-I've never had a DBC beer that blows me away, but most are drinkable. The Graham Cracker Porter is above-average (especially on tap), their IPA (Incredible Pedal) is so-so, and the Belgian pale ale that I tried last night was above average too. I've had some losers from DBC, but most of their beers are serviceable.

Ser-I have had a hard time getting great service here. It is sometimes slow (owing to the crowds, mostly) and last night the bar tender was just, um, kind of a jerk. I have had a few visits with people here who know what they are brewing, but that has been a while.

Sel-The beer selection is broad in terms of style, with everything from a barleywine to an IPA to a porter on offer last night. I have never seen a guest tap here.

O-The Denver BAs give DBC a hard time for various reasons. The bad rep is somewhat deserved, but there are worse beer joints in town and patio is good people watching.