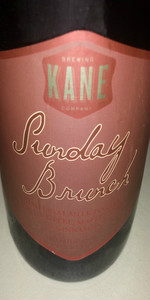 Appearance - The beer poured an oily black color with a tan colored head and lacing left behind.

Smell - to put it simply, it smells like cinnamon toast. They were definite bread notes.

Taste - This tasted like cinnamon toast. They were definite bready notes with spice with just a touch of maple sweetness. The cinnamon was nicely balanced and not oppressive. In the back, it leaned more towards bitter coffee as the sweetness faded.

Mouthfeel - Being a porter, it was a little less clingy than a stout with less tendency to coat the mouth. It was still able to linger for a while b

Overall - This was great. It was not as heavy as a dessert stout.

Thank you, Sam. This was cellared a year-ish.

A very dark brown with a dense, brown head with good retention and lacing, this looks good. The nose is great. Cinnamon, smoke, buckwheat honey, dark caramel, milk chocolate, all in nice balance. A little maple is present as well, along with a little vanilla. The palate opens mildly sweet but with the flavors of chocolate and cinnamon in nice harmony with milk chocolate, creamy and sweet, present. Vanilla and maple are present. Surprisingly light on the palate, this beer is soft and creamy and mildly carbonated. Very good.

S - Tons of cinnamon. Milk chocolate, vanilla, maple?. Not smelling much booze so at all, so guessing non-BA adjunct stout.

O - what a decadent dessert stout.

Sweet, creamy, and rich on the palate - not unlike egg nog. The coffee adds a sharp earthiness that barely manages to cut through the maple and cinnamon. Big creamy milk porter base is a lovely jumping off point for these flavors. Could use more coffee flavor, but the maple is a wonderful balance, bringing the exact right amount of sweetness, along with a woody note.

Full bodied, sticky, and with a little bit of alcohol heat. I really like the way the alcohol isn't hidden hear, but it's incredibly drinkable and easy to savor.

This is a wonderful beer, worthy of consideration as one of the best maple stouts/porters. The higher ABV provides more of a body than FB MBCP, while keeping it single digits makes it more approachable than many other cinnamon flavored stouts.

Look is a traditional porter, black with a tan head that leaves minimal lacing. Nose is all expected, coffee, cinnamon, and maple syrup. Get some bakers chocolate as well. Taste follows the nose. Feel is luscious, but not oil thick. Overall, a great porter! Sweet aspects that do not become cloying

Big like Hulk when he borrowed Barry Bond’s “vitamin supplements.” Huge, I’m talking huge coffee flavor like a hungover Sunday at Starbucks. But this beer wasn’t brewed with Starbucks; this is quality hipster coffee just like the dork that lives below you who rides a fixie to work. That being said, the only thing that Raul isn’t feeling is the sweet maple syrup (cause your boi ain’t into sweetness). Also, I wish the mouthfeel in the end was a lil more viscous. It’s not bad. It’s not Martha Hunt super model skinny, but I’d prefer if it was Ashley Graham large.

Poured into teku glass via bottle

Smell is copious amounts of cinnamon, coffee and maple syrup

Carbonation is low
And mouthfeel is full and creamy

This is one hell of a porter!

all the flavors blend nicely here and create a fantastic beer..i need more of this stuff!

The pour is black with mahogany colors on the edges, underneath a dense tan head. The first note on the nose is rich coffee - wow. This literally reminds me of brunch. There’s also a significant cinnamon component. I am now officially salivating.

The maple and cinnamon are more prominent on the taste, which really elevates this, IMHO, because they are the perfect balance to the roasty coffee flavors, and admit milk chocolate flavors to the imperial porter dance party Kane has served up.

The mouthfeel is a bit chewy, which fits this beer perfectly. This flavor profile (chocolate, coffee, maple) is popular, and Kane absolutely nailed this with the cinnamon addition.

T: Follows nose in waves of flavor. Cinnamon and coffee up front, then maple and roastiness come in and hang out for a while.

F: Full bodied, not much carbonation. Full points for high level of difficulty in construction and balance and they pull it off wonderfully.

O: So worth the wait. Hope it's not another four years before the next one.

What truly surprises me about Sunday Brunch is, in spite of being a non barrel-aged beer, just how complex and layered it is. The coffee is smooth and lightly roasty. The maple isn't super forward but it adds body and subtle, excellent flavor - tasting quite natural, by the way. The beer has great body and drinks easily. I really like this one - I can't imagine drinking a whole bottle by myself, but definitely enjoyed sharing this one with friends.

On tap at Morris Tap and Grill in Randolph. Pours a jet black ebony hue with minimal frothing. Complex aroma replete with hints of chocolate, and cream. Good stuff. Recommended.

This beer lives up to the hype. All of the ingredients are discernible but aren't overpowering. Nice notes of maple, mocha, and cinnamon. Medium+ mouthfeel. Minimal booze. Awesome.

A great stout; so glad I have several bottles of this.

03/2015 - I've always a fan of this; awesome cinnamon and coffee, without either being overpowering, on the nose; lactose and vanilla ensure a nice sweetness on the palate; relatively thick body, especially for the style.

While placing the imperial porter at the end of any session makes a lot of sense when it comes to impact on the palate, as it's usually the strongest flavored beer of the day, coffee stouts can get in touch with out inner insomniac. But the imperial coffee porter of Kane Brewing is strong in its effects while carrying a caffeinated jolt; perfectly suited for pick-me-up and put-me-down of brunch.

Sunday Brunch is a formidable dark ale of such character and placement as it pours a sparsely headed black appearance, looking like dark roasted coffee immediately to the eye. Its onyx-like sheen precedes a decadent and roasty scent that's laced with maple, spice, cocoa and coffee. Its strong taste greets the tongue with a hearty sweetness of maple, molasses, caramel and toffee.

Its decadence resumes across the middle palate as the sweetness turns to robust. French press coffee, black walnut, dark chocolate wrap around the caramel and cream and ushers in a bittersweet finish with rich suggestions of coconut, cinnamon and kahlua.

Full in body, the lavish stout is mild enough in texture to mimic the feel of a creamy, sugar sweetened espresso except with a Mexican hot chocolate under current. Spiced with a bourbon glaze, the oaken attitude of charred woods, vanilla, caramel and peppery tannins play a sweet and spicy tune on the after palate.

The first whiff and sip of this beer is incredible. Cinnamon stands out most prominent over the nice coffee in the background. It's like a warm cinnabun. The only problem with this beer is it's quite sweet and it starts to take its toll if you have a whole glass. nb

Pitch black with a think mocha head. Rich milk chocolate and coffee with a hint of maple and a milkshake mouth feel. All the flavors were popping months after the release.

Smell was awesome. Nice cinnamon and maple. The initial flavor was what threw me. Almost like an apply flavor in the front, that melded into a maple bomb. Smelled great. Initial flavor not great. Back end flavor, decent. 3.6

EDIT: Tried it for a second time, and I think my first bottle was a bad one. Everything came together very nicely with all the flavors. No apple, but lots of maple and cinnamon. Great beer

750ml bottle, served in a snifter glass. Pour is medium dark brownish/black body, one finger light reddish/brown head, good retention and bits of lacing. Smell is heavily roasted coffee bean, sort of slightly burnt in a way, milk chocolate, cinnamon, a bit of green pepper and espresso. A bit weird at first, I think the coffee and cinnamon combined to make it smell a bit burnt. Flavour is much better though, not a ton of maple syrup but neither is it too sweet. Cinnamon lingers the background throughout, perhaps contributing a slight green pepper, black coffee and dark fruit, a fair bit of milk chocolate and caramel. Mouthfeel is full bodied, thick and substantial, good carbonation and a smooth chocolate-forward finish. It kind of tastes like cinnamon sprinkled on chocolate frosting, in a good way.

Pours a rich chocolate black color that is impervious to light. 2 inch tan head quickly fades to a light brown ring around the glass. Cinnamon dominates the nose, followed swiftly by Maple and coffee. Cinnamon and maple also dominate upon first sip, coffee moves in afterward and smoothes out the finish. This is definitely a full-bodied beer, carbonation is minimal and perfect. Overall a delicious and flavorful beer, none of the flavors overwhelmed or dominate, they are perfectly mingled together.

Vintage 2017.
Opaque near black with a half inch khaki head that quickly disappears completely leaving only whisps of lace. The smell is of freshly brewed coffee, subtle maple and a hint of cinnamon. The taste follows with dark roast coffee and cream perfectly complimented by maple syrup and subtle cinnamon. Medium texture with low carbonation. Fantastic flavors flawlessly blending together. World class.