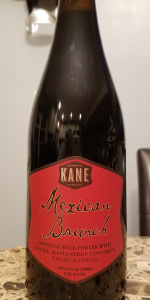 I'd heard the chatter about the 2017 gusher bottles--and holy hell I can't believe there was a full refund to purchasers even though testing showed there was no sign of infection, just some nucleation from the spices--but my bottle was cool as a cucumber and didn't even begin to fizzle up as I opened it.

The pour is deep brown with black ribbons, filling to black, with a very large, dense creamy tan foam settling to a persistent creamy tan blanket with a clinging soft collar.

As it pours, an abundant, enveloping aroma of freshly ground coffee fills the room! Coming in closer, deeply caramelized brown sugar spikes up--identical to intentionally burning it at the bottom of the pot when prepping for Mexican coffee. A touch of vanilla with darkly intense and brooding notes of cinnamon bark nears fried French Toast, but also pulls towards savory mole, yet stays in between both somehow, with a faint hint of roasted chili smoke.

OMG the flavor is incredible! A slight hint of smoke and spice from the chili pepper pops in for a brief appearance, but a metric shit ton of dark roast coffee, almost dusty, but mostly earthy, nutty, and chocolatey, absolutely dominates. That amazing caramelized brown sugar kicks in, with decadent accents of cinnamon that simulates an artisanal cinnamon roll, all finishing smoky. I'm similarly perplexed here as I was with Sunday Brunch, even moreso now that there is the added element of chilies, because I'm not sure what contributes the smoke, but it's an excellent yet modest addition.

The body is smooth and round, medium to full, with a fine, wonderful carbonation that only slightly expands in a rounded way on the palate, before giving a slight tang with a semi-dry finish.

I liked Sunday Brunch slightly more. This had such a potent kick of coffee by comparison, it was a little overwhelming, but it may be because I opened it just after bottling. The two are very, very similar to each other though, and the Mexican element really only comes through moreso in the caramelized brown sugar, and less so in the chilies. Now, I may be associating caramelized brown sugar where it could in fact be maple. Whatever the case, it's unbelievably delicious, yet still somehow balanced and not at all cloying, just like Sunday Brunch.

In December 2018 I had a 2016 bottle of Mexican Brunch and found it to be way more chocolatey than the more recent versions I've enjoyed. The cacao nibs really left their mark while everything else faded while some roasted chillies were more apparent. It was good but I love the direction they've taken it, only upping he quality.

Traded for this a month or two ago and finally got around to this tonight. Had it on tap in small amounts up at the Cloverleaf Tavern but this was the first time I had a chance to enjoy a full bottle of it and boy, was it everything I hoped it would be. Balanced, smooth, and flavorful, this was a titan of a brew that made every aspect of an "Imperial Milk Porter" ring true, from start to finish!

I don't say this often but the pour was the *least* appealing aspect of this beer, and it wasn't even that bad! Of course, it appeared to be brown, relatively thin, and capped off with a tan head full of tiny bubbles that held their own as if they were solid. Not a lot of lacing was left behind but when you can smell coffee, chocolate, brown sugar, and cocoa from across the room, who's to notice? All of those filled up my Kane goblet quite nicely as this seemed to be an Imperial version of the Carton Coffee but this wasn't even close to being one-dimensional. A mild roasted tone was topped off with a pronounced sweetness, bold milk chocolate taste and a mildly forward lactose sweetness that tied everything together. Unbelievably smooth for the amount of booze present, this never felt like an American Porter as the roasted and burnt notes could not be discerned over the brighter and sugary tones that characterized this. Hints of caramel and toffee were found in the aftertaste but if I had to venture a guess, the creamy, lactose-like characteristics of milk chocolate won out here as the end result was just a smile on my face.

With a bottle this big, there was enough booze to be felt by the time it was finished off. It tasted like a Coffee Porter but this was American since the roasted, toasty, and sticky aspects of an English Porter were nowhere to be found here. With that being said, this was American through and through since there since the coffee and chocolate characteristics easily won out over what this might have been "lacking". A clear winner, this ranks up with the Conclave's best and Carton's Coffee (Regular and Irregular) as the best offering *ever* produced in my flawed-but-beloved home state. Amazing stuff that deserves all the praised heaped upon it, this would be worth any effort to seek it out. Porters of any kind don't get better than this!

Loved this at EBF. Sampled 2-3 times and was blown away.

Kane really brought it to Boston. IMO, best selection of all breweries by a mile.

Had this at Aslin's 2nd Anniversary. It is a taste that will long last in my memory. Quite easily one of the best Porters I have ever had. The cinnamon was strong, but not overbearing. It was a treat to behold. This beer is a must have if you can find it.

Had a couple samples up at EBF.

Really great; their best non-IPA beer by far, and maybe their best beer. Like a better Mexican Cake from Westbrook which I love....tons of milk chocolate, vanilla, roasted malts, and light spice that doesn't dominate.

This needs to be bottled.

Lets start by saying this is the best beer brewed in new jersey period. Its everything you could ask for. Full body that coats the mouth. The flavors of coffee and peppers / spices hit in both the taste and aroma in the most perfect way one could ask for. Have had this beer many of times from its first release to the latest in both bottles and tap. Its well worth everything anyone has said about it in a positive manner.

A: Not as good as the base beer, Morning Bell, but still good. Pitch black, but the lacing and head are rather lacking. Still love the color.

S: Good. Lots of spices. Cinnamon, brown sugar, chili peppers, and chocolate. While the scents are good, however, the malt is somewhat masked by the overly potent spices.

O: Solid beer. Perhaps the spices were overdone, however.

2017 vintage. I won the lottery! Then we all got our money back! Kane is ridiculously awesome for doing that. For the record, 1 of my 5 bottles ended up with the surge problem. Still tested the same great taste.

So this is Morning Bell, which I love as is, with maple syrup, cinnamon, and chili.

S: Coffee, dairy lactose, cinnamon, maple, cocoa explosion. Just off the hook. What perfect scores were made for.

T: Generally speaking, follows nose. Coffee, cinnamon, and roasted malts up front, cocoa and maple through middle along with creamy dairy, and slight chili heat in finish along with some burned malts and caramel. Full of flavor.

F: Medium to full bodied, not much carbonation. Construction superb, balance of all these things strong, but tiny dock for heat lingering maybe longer than it should.

O: Just ridiculously good and Kane deserves so much credit for or how it handled this year. And now to find Sunday Brunch to complete the journey.

Similar to Sunday brunch but with a little smokey zing, not spicy. It smells amazing. Sunday brunch is just very slightly better in taste if I remember correctly

Taste: I notice the cinnamon a lot, not in an overpowering way. Chocolate follows, with some maple syrup, pepper is felt on the back of my throat very faintly.

On tap at Brewery.

A little disappointed. A nice medium spicy stout, but lacking the thickness and superior flavor of Sunday Brunch.

On tap at uno

Happy Cinco de Mayo. After sampling the 2019 batch 3 times (once on tap, twice from bottles), I am convinced that this version is better than the 2017 batch I had. Great flavors and aromas.

This was side by side with the BBA Mexican Brunch. The BBA is smoother, but maybe tamps down some of the flavor as well. It will probably land a similar overall rating.