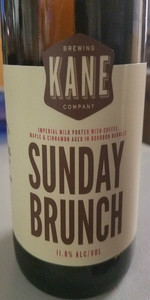 Pours a giant mocha colored foamy thick rich 1 finger head that fades slowly, plenty of lacing and great legs, pitch black beer, for the abv there is no way that gets any better!

Nose is incredible, just incredible, rich dark chocolate cocoa, a little nutty, a bit of coffee as well, tons of cinnamon, spicy almost hot cinnamon, nice vanilla, some barrel notes and a bit of bourbon and a little maple, maybe the only thing keeping it from a 5 is the lack of bourbon, some baking spices and a little tobacco, little fudgey nougat and marshmallowy thing

Taste brings more of the awesomeness, sweet rich dark malts, tons of cocoa and dark chocolate, into big cinnamon, lots of rich vanilla as well, cocoa, little coffee roast, back into big baking spices with the cinnamon, and again that mild tobacco with a touch of char, into barrel, not a ton but a really nice barrel, a little barrel, a bit of maple but not a ton, great vanilla and lush creamy cocoa, a touch of bitterness, chocolate sauce, finishing a bit more bitter, little roast and coffee, plenty more lingering fudge vanilla, some coconut late esp the burps

Mouth is full bod, rich creamy fairly lush, decent carb, no alcohol, just not quite velvety enough to be a 5 but very close

Overall incredible, the best beer I've had in a long time, only thing keeping it from 5s across the board is probably the lack of barrel and maple, otherwise just incredible

On tap at EBF in Boston, MA.

This one pours the expected dark black, with a small head and not much lacing.

The maple on this is so decadent, dark and rich- it just assaults the nose. There's lots of chocolate, deep bourbon barrel character, spicy oak, and creamy fruity coffee.

This is just so carefully built and thought out. It's a maple bomb, but it's still pretty complex. The barrel adds a lot to the base beer. The bourbon adds some earthy sweetness, and the oak adds some spiciness- keeping this from being too sweet. There's lots and lots of fudgy chocolate, a bit of coffee, and cinnamon sweetness that reminds me of cinnamon vanilla icing.

This is super thick and rich, and surprisingly drinkable. The mouthfeel is like heavy silk.

This was the best beer at Extreme Beer Fest. Kane should be very proud of this.

Picked this up today at the brewery. Never had this before so was stoked to try out. This beer comes with a lot of hype around it. Someone compared it to Treehouse Good Morning and Hunapu. Well I think it exceeds the hype.

The star of the beer is the aroma. The perfect amalgamation of maple, cinnamon, cafe au lait and dark chocolate. Its spectacular. The taste is more of the same but there is a nice depth to the coffee although not as pronounced as Kane Morning Bell it's still there to remind you of its presence. Thick slick mouthfeel.

This is a perfectly executed Imperial Porter that will put a smile on your face again and again.

Bottle to wine glass at daughters communion party. Oh, this was so worth the trouble to get this.

LOOK: dark black, not quite syrupy, but thick, with a healthy off white head.
AROMA: coffee, maple, chocolate, bourbon; all in equal parts.
TASTE: Someone chocolate covered the best piece of french toast in the world, then soaked it into bourbon and then dissolved it into this super tasty porter. WOW! Notes of coffee, caramel, vanilla, oatmeal, brown sugar all play around throughout the pour. simply wonderful. Yum.
FEEL: smooth as silk. full bodied. touch of carbonation.

Oh My! This is the best beer I have ever tasted. It is so well balanced between sweet and savory, light and thick, boozy yet smooth. No aftertaste, side effects, astringency, sourness, bitterness or anything off. As close to perfection as I have witnessed in beer.

Awesome. This was my top rated beer. Dropping slightly just to signify that I think ANTEAD is ever so slightly better.

Just sampled the bourbon barrell version for the 3rd time. It was previously my highest ranked beer at 4.99; but I had to drop it just a touch since I am now convinced that ANTEAD is superior.

This poured out black with a brown colored head on top. The smell of the beer has a really nice sweet yet subtle spicy note to it. The taste is really well balanced between the barrel flavors and the adjuncts. Overall it’s a very good brew.

A - Poured into a Kate the Great tulip a nice dark black with a two finger mocha head that fades to leave a thin blanket with excellent lacing and great legs.

T - Taste is similar to the nose with nice bright spicy cinnamon. The chocolate and coffee is really really prominent. Nice light coconut from the barrel. The maple is lightly sweet and more of a counter balance to the rest of the beer. The actual bourbon notes are rather restrained.

O - Overall this was a very very enjoyable beer. The base beer is excellent and the barrel brings just enough. Really an exquisite beer.