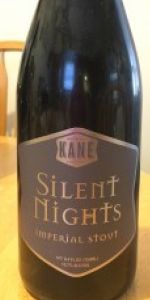 Notes: American-style Imperial Stout. This is a hopped-up version of a classic Imperial Stout. Starting with Halcyon Pale, a traditional British base malt that adds a toasty, biscuity character to the beer, we add dark roasted and caramel malts for notes of coffee, chocolate, and dark fruits. Generous use of American hops, Simcoe, Chinook and Columbus, add bold but complementary flavors and aromas that bring everything together in a full bodied and richly complex ale for the quiet off season here on the coast.
View: Beers | Place Reviews
Reviews: 21 | Ratings: 130 | Log in to view all ratings and sort
Reviews by Moopband:

Black body, with a high quantity of ruby highlights.

Kiss of chocolate up front, followed by coffee. Assertive hops at the swallow.

Mouthfeel is a bit wimpy for the style, need more to chew on.

Not a classic, but definitely enjoyable, and looking forward to future versions.

Appearance: Arrives with a film of foam pancaked on top o the fudge brown liquid; leaves a few dots behind

Taste: Dark chocolate on the opening, with graham cracker and coffee flavors developing; roasty, in the middle, with some burnt caramel and smoke; the finish is somewhat sweet

Mouthfeel: Full bodied with moderate carbonation; some warmth in the gullet

Overall: A complex brew though a bit too sweet for my palate

Had this on tap. Completely opaque, black midnight appearance with a caramel colored head. Aroma screams of an extremely malty presence. Tart, dark fruits, cherry, and fig notes filled the thick flavor. Grainy finish, with noticeable alcohol presence. This is my first brew by Kane, consider me impressed!

This might have been the first bottle on the Other Half line that was given to me by someone who was looking to get rid of his stash. Given that I enjoy Kane's offerings, this was a no-brainer to take and thankfully, I didn't have to let this sit very long before having it. Not a bad Stout but it was just a bit more basic than I would have liked. Quite smooth, the coffee and chocolate stood out more than anything else and the recessed alcoholic presence was welcome, but just a bit different than what I'm used to from an American Double / Imperial Stout.

Without a doubt, the pour was the best aspect of this beer. With a cola hue and khaki head, this had the appearance of liquid chocolate mousse. The bubbles lingered for quite a while in my Kane goblet as there were several well-defined soapy rings to be seen as I worked my way through this. Lots of milk chocolate and cocoa powder with some subdued hints of coffee and cream underneath that. The plum and currant came through in the taste along with everything else that was in the nose, as this was indeed full-bodied and roasted without being overly sticky or drowned out by coffee beans brought to warmth. Moderate in carbonation and with a recessed alcoholic taste, this *almost* felt like a Black IPA or an "Imperial Porter* because of the depth of body and roasted aspect...though this was indeed a Stout when all was said and done.

Not weak, this wasn't as strong as other Stouts that I've had lately. It ran thin like coffee but had the richness of chocolate with plenty of fruit notes thrown in, as this was nearly as good a dessert beer as something this dark could get. Really nice job on this as I enjoyed it while not having end my session at the same time. This beer was anything but silent in the end!