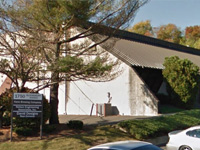 Notes: Kane Brewing Company is a craft brewery located on the coast of New Jersey. The brewery was founded by homebrewer, Michael Kane, in August of 2011. Our focus is on American style and Belgian influenced ales. All our handcrafted beers are unfiltered and brewed locally in out custom built four-vessel brewhouse located in Ocean in Monmouth County. Our beers are self-distributed and available on draft at restaurants and bars throughout New Jersey.
BEER STATS

Large, industrial warehouse type space with good service and exceptional beers. No sit-down areas or bar to speak of, just large barrels to use as tables. No food truck, although people were bringing in outside food. My initial impression is that it was pretty crowded for a Sunday morning, 1/2 hour after opening, without it being a release day.

Visited at the end of the summer in 2021 while the indoors was still closed due to COVID. Frolicking beer garden scene on a Sunday, though.

We had just had drinks and lunch in Asbury Park, so we merely stopped for one round. I had a Wind Swell and she hada brewery-exclusive Blood Orange Cloud Cover. She loved her beer and has mentioned several times since that she wishes they would can it.

To-go cans are purchasable as you leave the grounds and I grabbed three 4-packs on my way out.

Ok I love Kane. A local NJ guy, trust me, nothing but love. The real note I want to put in is if you anticipate visiting “post covid” just know it is extremely hot. No A/C, the vats are going, you’re basically in a combination between an airplane hanger and USPS delivery facility.

Let me make this short and sweet best beer on the planet hands down trust me it's better than sex yes that good enjoy.

Considering how much of their beer I've aggressively traded for, and thoroughly enjoyed at home or at awesome beer festivals, this place was becoming a little too much of a Never Never Land myth to me, and to my other half as well, who may actually love them even more than myself. So it was about damn time we got our asses in gear and hit the road to bring this brewery down to Earth from the lofty heights our minds were lifting it to.

It helps coming in to know that this is a production brewery first and foremost, and basically a tasting room second. The room where their original small tasting room was is still carved out, but I can't imagine that being the only spot to drink, because it's about the size of a waiting room in an auto body shop. This room is like a fishbowl opening out into the more expansive production and tasting area just through the door to your right. It features a larger list of taps, as well as on-site bottles. Seating consists of only a few fat picnic table, while some barrels are strewn around the edges, available as resting surfaces to those that inevitably end up having to stand. Large fermentation tanks are conveniently off to the side, and the Kane re-branded wall-o-barrels is in and of itself very IG worthy.

Kane can get quite busy, at least around a release, but they have an orderly system for dealing with draft pours and to-go pickups. The beer list may be small, but showcases a really wide variety of styles. They had a few hoppy ales, an oak aged lager AND pilsner, as well as a couple of their more vaunted dark barrel aged blends. I went during their 2019 anniversary weekend, and they were awesome enough to have 5 different barrel aged beers available to go ON TOP OF the ticketed Anniversary blends I'd already paid for, as well as 3 other beers available in cans. It's a good thing they don't have any archaic Pennsylvania-style beer laws here because you could walk out of here with a distributor's worth of beer.

While it's not the fantasy my mind was beginning to make it out to be, it doesn't need to be. It's a taproom in a production brewery, one that just so happens to make some of the best barrel aged beer on the darker side of the spectrum on the planet. Keep it up Kane!

This is my go to brewery and I am probably here once a month or so despite being a 45 minute drive away. They make the best beer in the state and in my opinion its not even close, I would put them up against most other breweries as they are very strong at both Stouts and IPAs/IIPAs.

They have 2 bars, one int he front in the small room that they also do merch sales from and typically have limited pours (through the room is heated/air conditioned). As others have noted the maintasting area/bar are in the middle of the production brewery which is not heated or air conditioned so on a very hot or cold day that you may be a little uncomfortable. I'm hoping they can continue to expand and get a better tasting area. Thankfully they usually have pours available of many of their harder to obtain beers like Mexican Brunch, Sunday Brunch etc. which is great to still be able to get pours of bottles that you may miss out on releases. The line for pours cna get little long, but again their quality is outstanding across many different styles and beers. Highly Recommend!

Great brewery, I am fortunate to live so close to a world class brewery. This brewery is solely a production brewery and nothing more. They have a very nice brewery, and the tap room is in the middle of the brewery, so you are sampling in the middle of the tanks, and on weekdays, the brewers are actively brewing the beers. Tours are awesome. Quality of beers offered are world class. I love that they tap rare kegs for samples frequently. My biggest gripe is they always seem understaffed, especially when they have a big bottle release - they could handle the volume much more efficiently, but choose not to, which is aggravating.

Visited Kane Brewing on the first truly warm day of Spring 2018. Before entering, you are greeted and welcomed by someone at the door. The brewery has a small outer serving area, with about a dozen taps, and where glasses and apparel can be purchased. Past that is a much larger space, with a large service area and seating for a several dozen, as well as standing room for many more.

The service area there is well organized, with two lines (and 12 distinct taps) for growler and prepackaged purchases and a third line (and taps) for tastings. Line seems an unfair characterization, as I was served almost immediately despite a large crowd. The vibe is exceptionally welcoming and the service really top notch. It really helps that the servers know their beers.

With a dozen offering available on tap and half a dozen prepackaged, the selection is excellent and the quality top of the class in NJ. Kane has a well deserved reputation for being the best brewery in the state and is certainly on a par with other top notch breweries I have visited.

Large space with good service. Beer is quality though slightly overrated. Core beers usually always available but selection wise I wish there was a bit more as some of the selection listed were not available. The only down side is the vibe. Not much going on, cold space in an uninviting warehouse with limited seating when it’s busy. The people who frequent there aren’t the type you strike up conversations with.

Kane is the best brewery in New Jersey. They knock their IPAs and Porters out of the park. Highlights are (Imperial) Sneakbox, Morning Bell, Sunday Brunch, and Party Wave. Go!