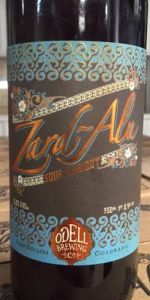 750 ml ( ) poured into pint glasses.
Quickly disappearing head.
I got neither the aroma or taste of apricots, which was actually fine with me. A friend brought it and even though I don't like peach/apricot, I gave it a try.
I found it to be an average sour--very drinkable and enjoyable enough.
Light body, a sweetness to it, and the typical sour. Went down easily but not a sour I would chase down.

A: Poured into a Duvel tulip to a slightly cloudy light orange topped by a dense two finger white head that fades to a collar around the edge of the glass with some lacing
S: Smells of light sourness and funk with some apricots.
T: Taste is surprisingly sour up front with a huge burst of apricots along with some funk. Swallow is more juicy apricots with lingering sourness and funk.
M: This beer is fairly light in body with effervescent carbonation and a drying finish from the acidity.
O: Overall this one is very good. It has some nice flavors and complexity but it doesn't have more going on than you can keep track of. Not quite up to par with Filmishmish but it's a more than suitable substitute.

Odell makes some solid offerings but this one fell short for me. Maybe I'm spoiled by Jester King sours that are the real deal, this just came off as phony and fake. The apricot is non existent in the nose or taste. I get a brett tingle on my tougue each sip. It's not bad and very drinkable, but not worth seeking out, especially at the $15 per 750ml I paid. I can get RedBud in 6 pack of cans for $9.99 and get the same fake sour taste if I want.

It's a hazy apricot colour with an inch of foam.

Smells of Brett, apricot and peaches; that's the tart side. I notice a bit of a fruity sweetness. ..

Not entirely sweet that other fruit. More of a neutral vs the apricots and peaches. The Brett is more subdued than the smell suggested. Nice user friendly level of the sour.

The apricot shows in the flavor but not the nose. Not a super strong flavor. Some funk (maybe a touch of Brett) and some acidity. Tart with some sour.

everyone has to make all sour everything to stay relevant now is that it? what happened to the classic woody hoppy unique beers these guys used to make? this tastes like someone late to the party trying to make up ground. more of a hot lactic thing than a barrel one, less funk than just pure acidity, lacking depth, and the fruit is quite faint in it as well. if this had come out five years ago i would likely have a higher opinion of it, but it seems like a million others at this point, and really doesnt have the complexity or layers that i like in american wild ales these days. i guess there is more brett in the flavor than in the nose, but it still tastes really young to me. they have done a fine job tempering the sourness though, despite being one dimensional, its not too much. some white wine notes from the fruit, like a bright acidic chardonnay, but the apricots are kind of in the back here. lively and active carbonation. i suspect this will get better over time, but i always expect the world from these special odell releases and the last few have been relatively unimpressive when compared with the field. way better than prop culture, but still not up to their high standards i dont think. i had it on tap though, so maybe its better in the bottle, some time i think will certainly help it...

Gold to copper in color with a very hazy complexion. There's a fingernail of off white around the rim and a bit in the center. The nose only brings faint apricot. I taste apricot, pear, and champagne. The mouth is highly carbonated, crisp, and refreshing.

This is an awesome beer and I cannot believe how easy it is to find right now. Apricot taste is just the right amount, not too sour, right amount of funk and wood, carbonation like a Casey Sour. If you miss having a Apricot FS or Fou, pick this up to help cope with not having a Fou. Delicious.

Zard-Alu Sour Apricot from Odell Brewing Company
Beer rating: 90 out of 100 with 64 ratings