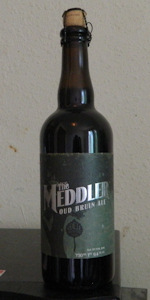 Notes: A resurrected style from the Flemish region of Belgium, The Meddler oud bruin is a crafty concoction, comprised of several generations of brown ales, barrel aged and blended. Wild yeasts, Lactobacillus, and Brettanomyces meddle with the brew for over 18 months creating complexity and depth of flavor. Hints of malty sweet chocolate and vanilla toy with a hauntingly sour finish. Intricate yet balanced, The Meddler will leave you craving more of the mysterious brew.
View: Beers | Place Reviews
Reviews: 71 | Ratings: 313 | Log in to view all ratings and sort
Reviews by SourAddict:

Poured from the bottle into a tulip glass. Nice pop off the cork. No obvious bottle dating that I can detect.

A muddy and dark milk chocolate brown body color, with lots of tan pin head bubbles racing up the sides of the glass in solid streams. Head creation is a bit snapping sounding but manages not to dissolve. A solid light tan two finger head is produced, a bit of fizz sounding dissolve, but always stays a finger populated with a nice finger length top, fine bubbles, and a creamy smooth surface. Very interesting looking Bruin and a neat one.

Aroma is quite nice. Mild sensing tart cherry, a bit of vanilla and milky chocolate sweetness as well, but tartness is definitely up front. Aromas though are more subtle and slightly buried on the nose though. There's quite a nice bit of complexity, but it's a little hard to dig out some of the sensed flavors. Otherwise pretty solid.

Palate is bringing lots of love. Creamy mouthfeel with a lighter touch, but a nice warm tartness that is mellowed out with some mild bubbles that play well on the palate. Mid palate comes with a creamy vanilla and tangy fruit, more sensing towards berries in a way. Further milk chocolate comes with an almost milkshake like quality of taste and sweetness. Aftertaste is a bit jarring but still hand-able. Finishes a bit ashen like with a surprising slight astringent bitterness, but subsequent sips add and counter with more milky chocolate and sweetness that almost gives a fruited tangy chocolate cake quality.

A real nice take on an Oud Bruin, the barrel aging has done some real good compliments to this. I would love to have this again someday.

served chilled from corked/caged bomber to tulip. fair warning: this bottle is a pain in the ass to open. I've opened plenty of corked and caged bottles but this thing was rough. if you aren't careful you'll have a mess on your hands.

A: cloudy (no floaters or anything) brown with a slight nod in the orange direction. thick head immediately after being poured, but dissipates quickly with low retention. impressive lacing. it's beautiful in it's own weird way.
S: first off, whoa. secondly, coming back into focus after initial shock, there's a basalmic vinegar hit right off the bat, followed closely by a sweet maltiness, and plenty of tart fruit (sour cherry/green apple) backed by oak.
T: again, whoa. this is violent, and great. plenty going on here. one could mistake the complexity for chaos, but I find it wonderful. the oak is well pronounced, with the malted sweetness engaging in a funky dance with the sweet and sour of the fruit (still cherry and maybe apple. apple cider vinegar? sounds weird but seriously, it's delicious)
F: medium body with decent carbonation.

Bottomline:
I find myself puckering my lips, but I'm not sure if it's from the sourness or the desire to kiss the dang bottle. it's weird. it's not as sour as it's other styled sisters tend to be, with the sweetness coaxing the sour down off it's potential soapbox. it's by no means a session beer in my opinion, but truly one of the most fascinating brews I've had in a while. it brings the funk. bring dancing shoes.

750mL into a Belgian tulip.

A- Body is dark as an imperial stout almost, but there's not much in the way of head. No lace either. Little islets of film. 4.25

M- The Achilles heel to this beer is the mouthfeel. Borders on watery at times when the flavors call for something thicker, stickier, richer. The tartness is nice but could also be upped a tad, but there's a nice balance of tart and sweet. 3.75

This beer is great but it could still be better. More mouthfeel. That's all I ask for.

750 mL bottle corked and caged. This is my first real sour, we don't get many of them out here.

Appearance - A beautiful dark brown pour, hints of red shining through around the edges of the glass. A nice off-white head that slowly dies down and leaves a ring around the glass. 4.5/5

Smell - It smells a lot like a wine. You can smell the vinegar-like sour, as well as fruits. Tart cherries, grapes, and apples. I love this smell! 4.5/5

Taste - The taste follows the nose. It tastes like a wine and a beer had a baby. A wine with a malt backbone if you will. Nice lip puckering sour, and the alcohol is well balanced. 4.5/5

Mouthfeel - Nice and bubbly! It keeps it from lingering around too long. It lingers on the palette shortly, and the carbonation keeps it moving along. Wonderful. As soon as I finish a sip I want more! 4.5/5

Overall - I am a bit Odell fan, I'll admit it. I think almost everything they do is very good. I think they deserve much more respect nationwide. Far superior than a certain other brewery that occupies the same city. This sour is no exception. I was easily able to finish this 750 mL bottle by myself very quickly, and I'm half-entertaining going to get the other one in the fridge. The nice thing is I can do that, because this beer is just sitting on the shelf here! Trade for this, if you can't pick it up locally. It won't require anything fancy to get, and you won't be disappointed! 4.5/5

This beer pours a dark plum purple, near black color. Pours a pretty nice two finger head that is a caramel tan.

The nose consists of sweet dark fruit that is tangled in with lactic acidity. There is some oak on the nose but not overpowering. Definitely some blueberries and currents on the nose as well.

There is a lot of oak on the first taste. A little too much oak even for me. I taste more fruit on the second go at it. Lots of blueberries and lactic intermingled with a smoky maple flavor. Pretty complex taste, needs to lose a little oak.

Overall pretty good for an american shot at Oude Bruin, maybe not worth the price tag but good.