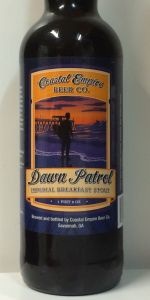 Dark imperial stout, little head, neglible lacing. The mole/cinnamon scent is immediately noticeable. Nice pepper note, didn't really change as it warmed. Nice balance between peppers, mole, coffee, and the fig/raisin. Can't detect an alcohol burn from the 12 % ABV. Drank that bomber way too fast. They call it a breakfast stout. Hope I can try it in the morning sometime.

Wish I had this brewery's beers more often than the two or three trips I make to Savannah each year!

Heat in the finish. This is the best part. Scott's bottle. Quaffable stuff if you like the substyle. Bottle from Atlana. Too much mole for breakfast, I think.

Reviewed from notes. Poured from 22 oz. bottle into a Cigar City Brewing goblet.

A: Very dark brown and opaque, with a low level of visible carbonation. Forms a couple finger's of tan head quickly, though it doesn't stick around for long.

S: Chocolate and roasted malt sweetness, light chilis and vanilla. Not a big aroma – this may need to warm up some.

T: OK...there's a lot going on here. We start with the cacao nibs up front. Roasted chili pepper flavor, roasted malts with light attendant coffee. Then comes a punch of capsaicin peppery heat that lasts throughout the rest of the drink. It's not Ghost Face Killah level, but certainly hotter than Hunahpu. Some vanilla, leather, dark fruit (raisons mostly), and cinnamon. The other spices I can’t pick out individually - but I was afraid they’d come across like a Christmas beer/Yankee candle when taken together...but they don’t. Certainly a rich, well-spiced aspect, though they only open up as the beer warms. The hang is spicy peppered chocolate.

M: This has a heavy body, though not as substantial as Hunahpu. Still some residual sugars though. Certainly has some alcohol heat mixed with the pepper burn going down. Low carbonation sensation.

O: This was reasonably good, and my favorite of Coastal's beers I've had so far. To me, this is too spicy. I love hot, spicy foods, but spicy drinks aren’t generally my preference. I enjoy peppered beers with the flavor of the peppers and just hints of the spice, but this swings a little bit too far for me. While I appreciate them not brewing the umpteenth iteration of the Hunahpu/Mexican Cake/Bomb/Abraxas formula, I think the beer suffered a bit from the addition of too many spices…and the raisons. Especially the raisons. I get the Mole thing, but they just don’t fit in this beer. Still, as I’ve said before – it’s largely a conceptual issue. Execution-wise, I think they did fairly well. Could tone down the alcohol presence a bit, maybe a thicker body, or less capsaicin. Still, decent.

Appearance: dark almost opaque brown. Full mocha head and lacing.
Smell: Coffee and dark fruit, hint of cinnamon and peppers. Quite a rich nose.
Taste: much like the nose. A slight pepper burn in the finish. This lingers but isn't pronounced. Very nice.

"Our Imperial Breakfast Stout is aged for four weeks on coffee, raisins, serrano peppers, ancho peppers, cumin, allspice, nutmeg and cinnamon. This aging produces a complex aroma and flavor profile that is well worth the eight weeks it takes to produce it." Brewed in the style of an American Imperial Stout with raisins, coffee, peppers, and spices added. Available in 22 oz. bottles and on annual draft.

(Appearance) Pours a rich dark chocolate brown head of a frothy foam consistency over a jet black body. Retention is above average and lacing is light and spotty. 4

(Smell) A complex, inviting stout aroma. Chocolate, medium roast coffee, vanilla and caramel coalesce into a rich decadent specialty malt body, with the adjuncts of chile peppers, cinnamon and nutmeg adding some potent spiciness, heat and effervescence. The combination of flavors rivals the richness of peppered and spiced stouts. Potency is moderate. 4.25

(Taste) Pepper heat and cinnamon up front transitions to the meat of this stout flavor, a rich caramel and chocolate body, with moderate roasted barley and an exposed graininess and alcohol presence that sits as a bit more evident than competing stouts. Assertively spiced and peppered with cinnamon and allspice generating the bulk of sharpness in the spicing, and some lingering tingle well after the finish from the chili peppers. Finishes roasty with a slight graininess and alcohol heat on the back end. The biggest criticism of the flavor of this beer is a more exposed graininess and alcohol presence, which takes a good bit of time to get used to and does hold back the drinkability. 3.75

(Overall) A promising ale that would have the ability to rival big name complex Imperial Stouts, most notably Hunahpu with the assertive spicing and chili character, which I find notably more intense (quite the spicy tingle on the tongue) in this flavor. Unfortunately, the assertiveness of these adjuncts do not fairly match the depth of the body in this Imperial Stout, and the raisin character assists in generating a more potent rummy and boozy backbone which is evident in each sip, arguably to the detriment of this beers drinkability. In its current state, it still is a promising ale, perhaps a bit too busy for its own good, or just too many exposed flaws that hamper its overall impression. It's still a very tasty beer, and I'd like to revisit this in a few years time to see if the brewery has dialed down some of the rougher edges in this beer to craft a universally solid Imperial Stout. 3.75

Smell - As best I can describe it, the nose was spicy raisins.

Taste - The heat is very present in the initial but does not overwhelm. Then the raisins, or perhaps it is soy sauce, that overwhelms me. Chocolate notes go well with the spice, but the raisins detract. The heat lingers as do the raisins.

Mouthfeel - The carbonation is on target. It creates a nice smooth stout.

Overall - There is a lot of good here, but I think the raisins mask that good.

22oz bottle from Sprayberry Bottle Shop (Marietta, GA). 11.99. No bottling date but this was released within the past couple months. Served in a goblet.

Pours oil black with two fingers of deep mocha head. That beautiful head fades to a very thin ring around the edge without leaving any lace.

This is a rich and complex beer. Coffee, ancho chillies, dark chocolate, spiced candied raisins, roast malt, burnt caramel and a decent kick of booze. Both flavor and spice from the peppers are present. This decadent blend of breakfast stout and molé stout works quite well and does a great job masking the alcohol.

Kudos to Coastal Empire. Dawn Patrol is a bold new take that deftly combines breakfast stout with molé stout. This is the first brew I've tried from Coastal Empire and has me looking forward to seeing what else they are capable of.

Looks nice but no significant head. Smells strongly of the chiles and raisins. Taste initially has some light but short lived coffee flavor followed by alternating chile heat/flavor and typical fall spices along with some prevalent raisin flavors. I can't think of another beer I've had with raisins that actually did as good of a job of bringing the flavor out. Just the right amount of burn as well. Lots of different flavors and you can actually taste all of the individual adjuncts which is a rating in a beer with this many adjuncts. Nicely done.

I've had several mole stouts, and this one just isn't going to be one of my favorites. There's plenty of typical stout flavors - chocolate, malt, coffee, nut. All good. You do taste the spice and peppers. But there's this overwhelming raisin flavor that I just don't care for in any beer.