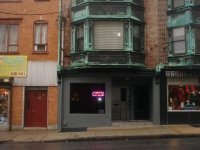 View: Place Reviews
Reviews: 2 | Log in to view all ratings and sort

This place is great - definition of "hole in the wall" but with an awesome and ever changing beer selection rotating on 14 taps. Great bottle selection too. Has a speak-easy feel but once you find this spot you will be back. Bartenders are friendly as are other patrons. Beer selection is great and less expensive than other nearby places.

We had three drafts: Stone Ruination, Brooklyn Sorachi Ace, and North Coast Old Rasputin (for dessert). We will definitely be back to try more!

FYI it is "bring your own food" except for the plentiful supply of goldfish. Fewer distractions from the beer!

Checked this place out after reading about it in Philly Beer Scene Mag. The bar is situated in the heart of Wilmington just a few blocks from Rodney Square. I can see this place being popular with the happy hour business crowd, but both times Ive been, there has only been a couple of other patrons. The parking police guy is always there. From the outside, the place is very unassuming. There is no sign outside so you'll have to keep your eyes peeled. There is a few parking garages around that are cheap.

The place isn't huge. Id estimate the bar seats about 20 and there are a few two top tables about. The decor is simple and cool. Brick walls. A little dark for my taste, but it works. The place is labled as a jazz bar, but both nights ive been, there was no live jazz. One night they had reggae playing and the other jazz. 3 large flat screens on mute, sports on them.

They have no kitchen, but each patron is provided thier own jar of gold fish. They also have menus for delivery places if youd like.

Ok. The beer. Its a great start and has tremendous potential, but there were a couple of things that didnt quite make me fall in love with the place, especially with Chelsea Tavern so close. First, both times Ive gone, the first beer I asked for was no longer available, the first time, the first TWO beers I asked for were unavailable. Big letdown. Also, of the 14 taps, id say only 10 were going. They have lots of bottles, but make sure you check the dates on those IPA's. To run down real quick a few of the beers I recall were Chimay, Rochefort, 120min, Hacker~Pschor, cuvee brut, sam adams....

Pricing was perfect. Most expensive thing on the menu was the bottles of 120 min for 18. A little high for bar price, but not too far off what I have seen other places.

The staff was very polite, attentive, and approachable. They are not very familiar with craft beer, but the bartenders showed that they were genuinely putting forth effort to learn more about craft brews.

I really hope this hangs around and takes the beer just a little more seriously. If they do, this will be a top destination in Wilmington for craft beer enthusiats.

The Nomad Bar in Wilmington, DE
Place rating: 4.17 out of 5 with 2 ratings