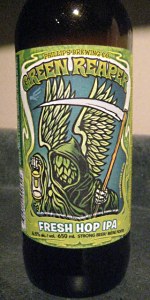 Notes: Green Reaper is a fresh-hop apparition sent to collect your tastebuds and guide them to the aftertaste. The hops aren't dried; they are delivered fresh to the brewhouse within 24 of harvesting maximizing hoppy flavour. But harvest time is short, so grab yours before it disappears for another year.
View: Beers
Reviews: 22 | Ratings: 59 | Log in to view all ratings and sort
Reviews by DaftCaskBC:

M: A resinous thick viscosity and a high level of fine carbonation. Some drying from the hops.

O: I didn't like this one as much as I hoped I would. Green Flash is another brewery where the taste of onions surfaces in their IPAs for my palate, and I'd rather have onions on my plate than in my glass.

Along with Driftwood and Hoyne , Phillips enters the Fresh hop market with this new release. The beer is pure juicy hops that waft off the nose and surround the mouth with each sip. The beer is pale in colour but complex and balanced which make it a joy to drink. I have to say that this is as good as Satori from Driftwood and one of the best IPAs from Phillips.

Green Reaper pours a clear gold with a nice head that lingers. The aroma is floral, slightly citrusy and grassy hops. Delicious fresh citrusy, slightly perfume-like fruity hops come through in the flavor, with a hint of grassiness. Some malt sweetness pokes through, with a solid bitterness backing up the flavor. I was surprised and impressed, I didn't think of Willamette as a good IPA type hop, but this beer is really changing my mind!

Lean, direct IPA with some popping hops, especially on the nose. But I don't know that I get much fresh hoppiness off of it - not so different from Hop Circle, really. It's well done, but I've seen this done before.

650ml bottle, weird faceless Grim Reaper parody label, which evokes images of the Nazgûl from The Lord of the Rings, IMHO.

This beer pours a clear, slightly glassy medium golden amber hue, with two fingers of puffy and silken eggshell white head, which leaves some perfectly consistent Gothic gnarled script lace around the glass as it lazily bleeds away. Very purty, I gotta say!

The bubbles are decently frothy, the body on the light side of middleweight, and with more than a modicum of smoothness, given the heavy-handed hoppiness. It finishes quite dry, the malt still no match for the virility of the green hoppy and moderated vegetal character.

A tasty enough fresh hop IPA, which admittedly sports an obvious off-flavour, but not enough of it to detract from the whole. Still good and big and hoppy overall, and low on the sweet malt offset, for those of us who more than occasionally crave such a skewed indulgence, and not just at this time of the year.

T much like the nose, strong rind and a slight herbal aspect with a earthy woody thing going on that's stronger towards the end

M has a nice bite and a little gritty after the fact, slightly creamy from the bubbles with a long finish

O pretty solid stuff but not the best fresh hopped brew from BC, no booze at any point and for 6$ a bomber I'll drink another

I tend to like Phillips IPA's but have yet to be blown away by one of them, I suppose "Good" is still pretty good

Another gem courtesy of joemcgrath27...

N - Nose is sweet citrus, floral hop notes, hints of cotton candy and earthy pine and a touch of fresh cut grass on the finish.

T - Solid citrus hop profile, the cotton candy and hints of pineapple come through on the finish. The bitterness is surprisingly mild, especially given the hop profile. An insanely sessionable IPA, nice sweet and fruity hop flavour that goes down like water.

M - Medium bodied, smooth and a touch of dryness on the finish.

O - Super stoked to have had the opportunity to try this brew, loads of flavour whose low bitterness makes it incredibly drinkable. An absolute pleasure to enjoy and well worth seeking out.

Poured from a bomber into a pint glass. No obvious best before date on the bottle.

S - nice and strong pine resin and grassy hops resolving into some guava and tropical fruit . After a few minutes the nose has a very slightly soapy element (in a well rinsed glass!)

T - the taste disappoints very slightly in that it lacks a bit of intensity, but in compensation does have some solid bitterness. The hops has a combination of pine resin and slightly sweet orange. The malt doesn't really make and appearance but does back things up subtly. What's missing is an enduring bitter finish; just when the bitterness misses its peak it quickly resolves. There's a hint of the mandarin orange left behind, but little else.

M - fairly traditional medium body, light to medium carbonation. No alcohol warming. Decent mouthfeel, but as mentioned above, it lacks an enduring quality.

This is a good but not exceptional IPA. I've perhaps been spoiled by Phillips's DIPAs which are tremendous hop bombs (Pandamonium, Amnesiac) so I may have had overly high hopes for this beer. That said, it's still absolutely worth a try.

Poured from 650ml bottle. Pours a bright yellow colour with hints of orange. Nose is filled with notes of freshly cut grass, cannabis and resin. Taste is similarly exotic, herb-filled and fresh. Not too grassy. Nice tangy citrus notes and plenty of hop spice. A much better version than 2012.

Pours a light amber with ample pearly head with decent retention. Nose has fresh hop all over it, with that green hop smell. Just something about fresh hop that make them distinct over died. Hops are fruity, floral and green. Taste follows with big and bitter hop (fruity and floral, with green/grassy). Malt profile is sweet, but flat.

A good solid performance here but nothing outstanding and IMO it lacks depth. I had guessed at 2 hop varieties in 2 additions, but after visiting the site and watching this video it was actually only 1 hop variety in 2 additions.

Another cool label. Good call on the Nazgûl, biboergosum.

Appearance. Pours a hazy yellow gold with just a little amber and a finger of thick, just off-white head.

Smell. Fruity fresh hops, some grainy malts and a little bit of onion. Yep, I smell it too daftcaskbc.

Taste. Nice, mildly bitter and fresh tasting hops. Some grainy light malts and again, just a little bit of onion. God damn it daftcaskbc, you just had to plant that seed before I even tried it!! lol

Overall. A decent beer, but there really is a little bit of onion going on there.

Nice IPA could use a few more hops for my taste but very nice. Could drink it all day long.
The 2018 batch is hopped much better,The 2018 vintage is crafted with full-cone Centennial hops.