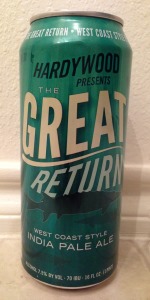 Notes: Bold, resinous and bursting with bright grapefruit aroma, this IPA is a tribute to the decades of hard work by conservationists to restore the James River as a bounty of vibrant aquatic life, eco-friendly recreational activity, and in our case, fresh brewing water. These efforts have culminated recently with the symbolic return of the endangered Atlantic sturgeon, a prehistoric, yet majestic behemoth of a fish, spotted as far up the James River as the fall line in Richmond. Your purchase of this beer supports the James River Association. Thank you for being a part of The Great Return.

In our commitment to James River conservation, Hardywood will contribute $10 per barrel of The Great Return to The James River Association, to support their mission to be the guardian of the James River. The JRA's core programs include Watershed Restoration, Education and Outreach, River Advocacy and the Riverkeeper Program.

Had a draft, Looks pretty light in color but very opaque. The smell is pretty sweet, nothing too strong, same with the taste. The fruit is definitely there and complements the bitterness well leaving the beer easy to drink.

Thanks cjgiant for this as part of NBS BIF #3.
Maybe it's because I brewed but there is a fresh wort character with a nice rounding off of hop character that leans towards the more recent "classic" west coast aroma with grass with fresh fruit tending towards citrus but not exclusive to that. A little soft spice too. It's appealing.
Rather cloudy golden amber and a dense tan head is also appealing. So let's get to the drink already.
Bitterness shows first starting soft and growing through the drink. There is a little tartness/grapefruit to the bitterness too. A fair amount of complexity with hits of caramel sweetness that blends with some hoppy fruit flavors. Some additional sweetness up front too. The grass hop character is prominent and shows frequently.
At first this seemed to drink small but in time is more towards moderate with ample carbonation.
In sum it drinks nicely. The bitterness push but doesn't cross the limits towards excess. It's rounded out nicely for a satisfying drink.

oz. can from a box of mostly VA beers from Gopens44. Canned on July 27, 2016 (at 0905, for those keeping score at home). Apparently this is brewed in support of a non-profit organization devoted to the restoration of the James River, a cause I would be happy to support if I lived where this beer is sold.

Poured into a Mad Bomber IPA glass, this was a chill-hazed, golden shade of amber, with a large, sudsy white head that left lots of lace.

Initially the aroma consisted of a somewhat restrained grapefruity hop scent. I was frankly surprised how much came through considering it's age. Sadly, as it warmed, a caramelly scented malt backbone arose from the depths, verging on butterscotch.

The mildly citrus hop flavor led the charge, seemingly more lemony than the nose foretold, but was closely followed by a coating, cloyingly sweet maltiness that almost, but not quite, drowns out the hops. Mildly dry finish.

Fairly light bodied for the style. Normally, I'd say it's too light for an IPA, but I think it actually helps fight off the diacetyly maltiness enough to keep the beer drinkable.

I suspect when this is fresh, it's a nice, lighter bodied IPA with a lot of appeal on a warm summer day, which my one visit to the region (1989!) told me they can be humid in that vicinity. It's still drinkable now, but it's definitely turning against the drinker at this point. Hopefully, at some point I can make it back there (and actually check out Richmond and some Civil War sites in the area), and drink it under such circumstances.