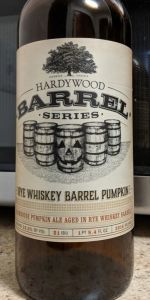 Notes: Hardywood Rye Whiskey Barrel Pumpkin combines the nostalgic flavors and aromas of autumn with a soul warming, rye whiskey laced finish that can only be achieved through months of maturation in rye whiskey barrels. Pleasantly mellow up front with a crescendo of pumpkin pie spice giving way to subtly sweet, lingering brown sugar and rye whiskey notes, this beer might just bring new meaning to thanksgiving.
View: Beers | Place Reviews
Reviews: 12 | Ratings: 64 | Log in to view all ratings and sort

A nice lightly hazy orange against my wall, but more like iced tea against my computer screen. A 2 finger off white head dissipates leaving some moderate lacing, before disappearing almost completely. Flecks of sediment suspended throughout, and light carbonation.

Aroma of tart rye, followed by pumpkin pie spice, then pumpkin with molasses. Spectacular in my opinion, and boozy, but that mellows. Best smelling pumpkin beer yet!

Taste is predominantly tart at first and this detracts a bit, but your taste adapts to it, the beer mellows out, and it becomes more balanced (superbly balanced), requiring an upgrade in my rating. Rye barrel, and of course pumpkin pie spice and pumpkin. I really don't get any molasses here, but there is some nice vanilla as you would expect from a barrel aged beer.

This beer grew on me. The aroma was incredible from the start, but the taste while at first seeming overly tart, developed well, becoming very well balanced. The best pumpkin beer ever, and one of the best beers ever.

Nice nose of tangy pumpkin notes with only light spices, though I'd like actad more from the barrel in the nose.

Oddly, happy the notes of barrel I miss in the nose are subdued in the taste. They definitely hit late, but the fruit/vege beer base is allowed to show itself early. Pumpkin tang to almost tartness and a subdued earthy spice gain the front of the beer.

Feel is medium, with a nice light carbonation level to give little spritz to the adjunct fruit front end.

A nice offering that fits the style well, and is more tangy and earthy than sweet. Barrel shows in end - completing a picture that is enjoyable in and of itself.

Medium amber to deep amber in color and clear with a touch of head that settles to a nice ring. Some lacing on a swirl.

Nose is a mix of pumpkin spices - nutmeg, cinnamon, clove, am getting sweetness, mild pumpkin, and vanilla.

Mouthful is medium and coating. Carbonation is average. Finish is sweet.

I would put this in the upper echelon of pumpkin ales. It's not vegetal. Its spicy and sweet, boozy, and has a solid pumpkin backbone that does not dominate. The barrel adds a great compliment to the regular farmhouse pumpkin. Highly recommended.

Poured from a cork and cage into a snifter, the beer is a crystal clear, copper coloring with a thin, filmy, white halo of head. Aromas of vanilla, whiskey spice and warmth, pumpkin spice, and subtle char. Flavors are roasted and boozy forward, with a solid bolt of spice, vanilla, bitter rye notes, and pumpkin spice. Smooth, slick, and full bodied. The aftertaste is whiskey spice and warmth, pumpkin spice, and vanilla. Smooth, slick, lingering finish. Good beer.

Poured a copper orange body with one-finger head that quickly died. Pumpkin spice with a woody "ryeness" to it along with hints of booze hit my nose. Medium/heavy body with a pumpkin flavor but there are strong notes of rye bread, spice, wood and booze. I liked this beer a good amount and it's not pumpkin dominated so good balance; however, as I continued to drink the whiskey/booze element started to bring some heat and overpower the beer.

The beer pours a nice white creamy head that dissipated fairly quickly. The beer itself is a clear deep amber color that is clear. It looks really nice and a bit darker that than the base farmhouse ale and it's really good.

The beer smell is great. It's a nice combination of a rich sweet pumpkin smell with a bit of brown sugar and various spices such as cinnamon and clove with a bit of light and bittersweet molasses to it. It's very good and definitely better than the rum variants.

The taste is also pretty good. It's a nice and balanced mix of pumpkin, spice, and rye whiskey notes. The pumpkin is sweet and overtaken by the other notes. The clove mixes well with the rye whiskey note, which seems to be the strongest one out of all of them, and the taste also has notes of brown sugar that works very well.

The feel is god. It's a medium bodied beer that is thinner than you would expect from a pumpkin beer. There is a bit of weight to it from the alcohol and an oiliness to it that detracts a little from the experience.

Clear caramel/bourbon color. Nice initial head that dissipated quickly. Rye dominates the nose with pumpkin, and a bit of brown sugar. Taste follows nose -- pumpkin is less sweet -- no overload of pumpkin spice like in many of the seasonals. Fairly balanced, with more influence from the rye and a little sweet caramel to finish. Rye aftertaste lingers. What I really like about this one is that it focuses on the two main event flavors without complicated spice clutter. A nice and different offering in the pumpkin ale world.

*Follow up. Drank half yesterday and then pumped air out and corked bottle. Better on day 2 -- this might be a first. Not sure why, but the flavors have blended even more -- really nice balance today -- had to boost a .25 in taste for the day after. Go figure.

Pours a slightly hazy orange, with no head or lacing.

Smells like a heavily over spiced pumpkin candle. The farmhouse base doesn't seem big enough to match the spicing.

This sounded good at the outset, but it just didn't work. There's some light rye whiskey. The flavor is a little thin, and the farmhouse base doesn't really show itself much at all thru the heavy duty spicing. Meh.

This is light bodied, with a thin mouthfeel. Not all that drinkable.

The label on the bottle called this Rye Whiskey Barrel Pumpkin. Whatever it is called, this is a top shelf Pumpkin Ale. Pours a clear orange color with a minimal head, less than average retention and some lacing on the glass. The aroma and flavor are exceptional. Real pumpkin flavor, molasses, well controlled pumpkin spices, and a healthy amount of oak and bourbon flavor all contribute to an exceptional beer. Mouthfeel is rich and mostly smooth, but there is a little alcohol bite. Genuine flavors, not a crappy holiday spices potpourii predominate. A big beer with a big flavor.

A- pours a deep amber-orange color with lot of floaties swimming around the glass, small fizzy white head disappears almost completely, leaving just a ring around the edge

S- lots of vegetal aromas up front with some underlying vanilla cream, traces of nutmeg and clove. The barrel notes are subtle, but provide aromas of fresh white oak and just a hint of spicy rye

T- the base beer is a nice mixture of pumpkin spicing and saison earthy flavors. The spicing provides notes of cinnamon, clove and nutmeg with some vegetal flavors. Beyond that, there is some earthy, musty, and slightly tart yeast notes, along with light phenols. The finish provides very light barrel flavors of toasted oak, vanilla and spicy rye

M- medium body and medium carbonation leads to a foamy mouthfeel that continues into the finish, good drinkability

O- this is an interesting take on a pumpkin ale, as it mixes the spicing of pumpkin ales with the earthy saison notes, and then adds the barrel aging. Very good and unlike any pumpkin beer I've had

Goes perfectly well with pumpkin cake. Not overly spiced, but has a vegetal smell to it. Not getting any barrel on this, decent cinnamon and lots of pumpkin vegetable notes. A little bit of sweetness, low carb, finishes super dry. Pretty good.

Very similar to the Hardywood Farmhouse Pumpkin. I expected a boozy pumpkin but its not. A little booze on the nose, a little bite at the finish, but in no way overpowering. A very good pumpkin beer.