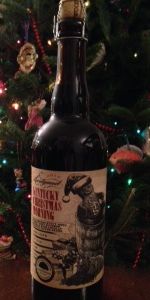 First off, barrel aged stout is my favorite type of beer. After years of trying many, many, of them, I think I would say this is the best beer of them all.

It is perfectly done, perfectly balanced, and so very drinkable!

The subtle coffee and spices are so well presented, and so well balanced, I have shared it with people who typically detest barrel aged stout and they like it as well.

Can't wait to get my hands on more!

Beautiful black pour with a mocha head. The mouthfeel is silky, very rich and substantial. No question this is a dessert beer, quite sweet. I found ginger to be by far the dominant flavor, dwarfing other flavors that I wanted to taste, regrettably. More complexity certainly would elevate this beer. And points off for a couple boozy sips at the bottom of the glass.

Poured from a 1pint 9.4 ounce bottle into a tulip glass.

Overall- A ginger forward bourbon barrel aged milk stout with an outstanding feel. This was a delightful Christmas experience.

Pours a nice dark black, a semi vigorous pour leaves a nice head to start. As with most barrel aged beers though the head doesn't last long, ring of tan around the glass and some islands for those misfit toys.

Aroma is bourbon and oak forward; followed by chocolate, coffee, spices and vanilla. An interesting note here I feel like I noticed and recognized ginger immediately in the regular one but in the BA one its more just general holiday spice smell.

Taste is like drinking a holiday spiced mocha latte, though the creaminess is much more restrained. I say mocha for the milk aspect only in feel, it cuts the bourbon and coffee nicely. I notice a lot of chocolate to this beer just as I did in the regular.

Big bodied beer, low carbonation, creamy silky mouthfeel, a coffee like bitterness, a lingering chocolate/coffee mouth coating with an ever so slight warming sensation that stays in the upper esophagus.

I think I enjoy this more than the regular christmas morning, its almost like the barreling toned down some of the dessertier aspects. It still definitely resembles gingerbread/dessert but now it gives the sensation of sipping an after drink spirit after dinner more than just a dessert itself.

A: Black on color with a creamy tan head. It looks like the top of a creme brule.

S: Big hit of whiskey up front. Bourbon, vanilla, and oak. Hints of coffee, and brown sugar in the finish.

M: Medium thick with a lovely creaminess and fairly aggressive carbonation. I think the carbonation is actually working in it's favor though to make it a little less cloying.

Intro: 750 mil. poured into a tulip glass. Shared with a friend.

Drink: Went down smooth. It was enjoyable.

Conclusion: First offering I’ve had by this brewery. Ginger was slightly off putting but enjoyable overall. Would like to try others but this will be one and done

Excited to try this one after all these years! Matte black with a finger of tan foam. Very artsy milk stout nose: bourbon allows the gingerbread, honey, coffee, to dance with much vigor, accenting the oak, toasted caramel, dark chocolate, and vanilla nuances. All together it is complex, alluring and warming. Taste is much sweeter than expected, probably from the honey, gingerbread and bourbon do their thing beautifully, but the coffee hits hard, bringing the spices with it. It's very good but way more muddled than the masterpiece that is GBS. Feel is medium bodied, lighter barrel presence, coffee and spices make themselves known, but otherwise smooth and but not as creamy as expected. Prefer GBS but this is still a wonderful beer

Looks magnificent in the glass. Jet black body with a decent tan head which, despite the high abv, persists in very good form throughout. Several small patches of lacing.

Light aromas of coffee and booze.

On tasting, the first few mouthfuls had that green pepper touch you get from badly roasted or poor coffee. However, as it warmed, this went away. Delicious coffee notes, warmth from the barrel, and nicely sweet.

Overall, was alarmed by the green pepper, but thankfully it didn't last. Enjoyed this sweet warm coffee boozy sipper over a couple hours.

There isn't a precise bottle date indicated, but there is a year printed at the top left of the label, over the name: "2020"

Appearance: It has a black body and a short, foamy, khaki head. The head quickly fades out to a visible ring around the glass. No lacing.

Aroma: There is a scent of bourbon and some barrel wood aroma. Not much going on otherwise.

Taste: Up front there is a nice chocolate flavor mixed with some green pepper and cinnamon. Towards the middle of the palate there is a good deal of cinnamon coming through. The back of the mouth has a bit of dark chocolate flavor. It is boozy throughout. There is a pleasant charred flavor throughout. Wet oak in the aftertaste, especially after taking a few consecutive sips.

Mouthfeel: It is on the lower edge of full bodied but it is very smooth.

Overall: The label states that this is an "IMPERIAL MILK STOUT AGED IN KENTUCKY BOURBON BARRELS WITH GINGER, VANILLA, HONEY, CINNAMON AND COFFEE" and that it contains "ALCOHOL 11.6% BY VOL." There is a nice bourbon barrel flavor and aroma, and cinnamon definitely comes through. The ginger doesn't seem to be present and the vanilla and honey are also hidden. There doesn't seem to be any coffee character, however there was a bit of green pepper flavor which could be it. There doesn't seem to be a lot of participation from a lot of these ingredients. This is the bourbon barrel aged version of Christmas Morning, but it seems to be crushing the beer it was derived from. The flavor alone is good enough to recommend this beer, but I would recommend the non-barrel aged version over this. I could still drink it again.

Ordered from Tavour in their Christmas pack. Poured into a sniffer.

Look: deep dark (almost black) with small less that’s finger-width head that quickly disappears and no lacing.
Smell: intense vanilla (almost like extract), bourbon, light gingerbread cookie.
Taste: sweet on the front end, intense vanilla and light bourbon in the middle, end notes of light (old) coffee in the nose with a lasting vanilla For an 11% it hides the ABV well and there is no hoppy character.
Feel: carbonation is light but sticks around, syrup(y-ish), thick and full mouthfeel. No drying at all.

If you like BBS this is a nice beer. Not super syrupy or sticky, but definitely full flavor. The old coffee flavor is a nice after note that comes well after the BB, vanilla and gingerbread cookie. Out of all their gingerbread line, this is by far my favorite.

I was hoping for a little more gingerbread but this is an excellent beer. Would love to have again

Dull black with a thin but creamy tan blanket clearing out from the center.

This has a good molasses presence with a hint of cinnamon, although there's also an unexpected note of mint.

That said, it's got a drinkable, light body with a crisp bubbly carbonation that lifts up a good cocoa roast.

Ultimately I enjoy this much more than regular GBS, which I'm not a big fan of. However, Bottle Logic is the undisputed ginger break cookie beer brewer in my little world.

Too sweet for me. The gingerbread actually overwhelms the barrel aging. Viscous and smooth but syrupy as well. A heavy beer that is best sipped early or late in the session.