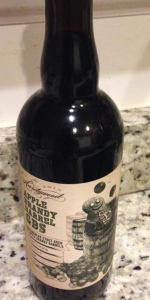 O- Love the apple brandy barrels with this. A great sipper that’s easy to drink.

Certainly one of the best BA GBS variants. Rich flavors, incredibly smooth. The apple brandy and cinnamon star, decadent chocolate lays the foundation. This is one to have annually, well worth a purchase.

The beer pours a decent bubbly brown head that dissipates very quickly while the beer itself is a very dark brown that strongly resembles a black with brown hues to it. The smell has a good brandy and tart apple note right upfront while the gbs notes are fairly mute. There is also a nice wooden note to it as well. The taste is the same as the smell even though the wood is a bit more prevalent. The difference is the GBS notes come out more in the finish than it does in the smell. Spices such as the ginger and a bit of the cinnamon comes out but not much else. The beer feels much lighter than it should because of the carbonation but is otherwise full bodied and a bit thin. Overall, not bad.

Pours nearly black in color with an offwhite head that fades to almost nothing. Smell is ginger, cinnamon, faint apple scent. Taste is ginger, chocolate, a little bit of apple, sugar cookie, hint of gingerbread towards the finish. Bit of an alcohol bite. Medium body. Not sure what to make with this one, some things I like, some things are eh. Would like a bit more apple presence but really, I think this is more or less muddled.

Thanks to the local shedding his cellar for this one. 750ML corked & caged bottle split with my wife.

The pour is dark brown, with a touch of clear radish around the edges. Bits of brandy, chocolate, & ginger end up in my nose.

GBS – Apple Brandy Barrel Aged is the rare barreled-up GBS where the barrel doesn’t detract from the cookie. Christmas cookie including vanilla, gingerbread, cinnamon, plenty of brown sugar, dipped in an appletini of light booziness (well, light in the mouth, blazing a trail of warmth below…no, not that far below, I’d get a course of antibiotics for that). Plenty drinkable, goes down like a middling ABV stout, not double digits.

The rare GBS this brewery stuck in a barrel that didn’t experience a significant decrease in deliciousness, the apple heat seems like a lovely complement, especially if lots of marginal family is involved. Excellent beer.

Appearance - Pours pitch black into my snifter with a hint of cola brown edging where the light can penetrate. Light tan, near finger width head that fizzes away somewhat quickly, leaving behind a mostly barren surface; a thin ring of suds encircling the edge of the glass. No real lacing. The few tiny spots that hang around eventually slide back into the drink.

Smell - The aroma hits the nose with abundance as the cork is popped, delivering ginger, chocolate, spice, faint baked apple fruitiness. Pouring into the glass produces much of the same, with that baked apple character standing out just a tad more.

Taste - Follows the nose. Chocolate and ginger upfront, then a bit of cinnamon spice and baked apple character kick in, overshadowing much of the initial chocolate flavor. Light honey sweetness emerges mid-taste, along with a distant oakiness. Continuing cinnamon spice. A bit of chocolate re-emerges in the finish, delivering a lingering sweet, slightly apple-ish and semi-spicy aftertaste.

Mouthfeel - Near full-bodied but with a good amount of tingly carbonation, making it feel lighter than it actually is. Slick, slighty creamy texture makes this an easy drinker with a slightly dry finish.

Overall - On a whim I looked the other GBS variants I had, and fitting that Kentucky Breakfast Morning was review # 1,500. This is a hell of a beer. Unique as any BA stout I've had that I can recall. A perfect choice for review # 2,000. This also marks my going into semi-retirement. Maybe a handful of reviews a month after this. It's been a great ride, and it it will continue to be so; just less 'frequent stops' so to speak. :P

A- pours deep brown in color with a thin foamy off-white head that has short retention. Some light creeping through the edge of the glass

T- ginger and cinnamon take the lead up front before giving way to chocolate and caramel malty notes. Mid-palate brings out barrel notes with a distinct green apple flavor and seems to be enhanced by the cinnamon. Also some woody oak coming through. The finish gives more gingerbread notes with a hint of boozy brandy on the linger

O- definitely one of my favorite barrel treatments of the series. The apple and cinnamon seem to compliment each other perfectly

Too cloyingly sweet for me to love it. The flavors work well together but I would prefer the base beer to this barrel aged variant. Favorite is still CM