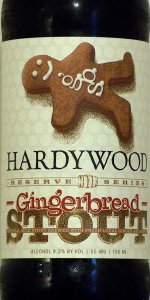 Notes: Brewed with baby ginger from Casselmonte Farm and wildflower honey from Bearer Farms, Hardywood Gingerbread Stout captures the terroir of central Virginia in a rich, creamy libation with a velvety mouthfeel and an intriguing evolution of flavors from milk chocolate and vanilla to honeycomb and cinnamon to a snap of ginger in the finish.

Deep, dark chocolate in color with a mahogany tint and a frothy, caramel colored head, Hardywood Gingerbread Stout offers aromatics of holiday spice originating from the ginger, and balanced with a generous dose of whole Madagascar bourbon vanilla beans and Vietnamese cinnamon. Milk sugar (lactose) contributes to the full body of this stout and tames its roasty character, while oats lend a silky quality. Enjoy fresh, or cellar for a special occasion. We hope Hardywood Gingerbread Stout contributes to your merriment this season.

4.46/5  rDev +4%
look: 4.25 | smell: 4.5 | taste: 4.5 | feel: 4.25 | overall: 4.5
Solid black appearance.
Medium light carbonation with an above average body. Slight slick creamy feel which all adds up to a nice feel.
Aroma is boozy alchohol, gingerbread spices, cookie, with some black coffee.
Taste is alchohol, boozy, gingerbread cookie,malt,dark cocoa, brown sugar sweetness.
A really well done dessert beer that is sweet but far from cloying. Definitely worth a try but one at a time is all could do.

4.18/5  rDev -2.6%
look: 5 | smell: 3.75 | taste: 4.25 | feel: 3.75 | overall: 4.5
Look: Pours a rich shade of mahogany / deep reddish-brown with a billowing two and a half finger head of beige foam. Great head retention, it lasts for about 10 minutes before finally subsiding into a thin ring of foam around the glass; revealing beautiful, intricate webs of lacing as it dissipates. Really a pretty looking beer. 5/5 on appearance.

Taste: It's sugary, but the taste is not nearly as sweet as the aroma. Upfront, a brief flash of vanilla bean amongst mildly bitter notes of sweet milk chocolate, burnt toffee and lightly roasted coffee. Transitions immediately into fruity notes of cherries, dates, tamarind candied apples and plums. There some banana/bubblegum like notes of yeast to round things out. Ginger and cinnamon blanket the entire taste in a pleasantly warming way, without outshining the other flavors. Mild, clean burning taste of alcohol on the tail end.

Feel: Sugary. Light body for the style, although the lactose and spices give it some weight. Medium-light feel. Low carbonation. Silky, slightly too sugary and slick but not unpleasantly so. Alcohol profile is apparent, but not in a flawed way.

Overall: Great flavor, tastes like gingerbread but in a non-artificial, genuine way. Flavored/desert stouts are not something I'd typically buy, but I saw it was fresh and decided to give it a go. I was worried this was going to be a sugar/spice bomb like a lot of other holiday / desert style beers; luckily it wasn't, although it's certainly very sweet. This is fairly well rounded beer for a desert / milk stout; a style which isn't particularly known for being "balanced" per say. Worth a try if you're looking for something seasonal but not over the top.

Reviewed by BrewMaven from New York

4.43/5  rDev +3.3%
look: 4.25 | smell: 4.25 | taste: 4.5 | feel: 4.5 | overall: 4.5
Pours near black with the slightest hint of ruby showing at the bottom of the Nonic.
Thin mocha head that flattened to a cover. Splotchy fine receding lace.
Smells of ginger vanilla and a bit of roasted malt. Sweet chocolate, molasses with a hint of ginger on the back end. Thick smooth mouthfeel with fine carbonation. Excellent!

Reviewed by ScruffySouthpaw from New York

Appearance: Thin body with a dark brown body and a off white head coming with a tan head maybe rising half a finger's length off the body.

Smell: Ginger and heavy molasses aroma but hits like a one night stand.

Reviewed by Antg8989 from New Jersey

Reviewed by shigg85 from Japan

Mouthfeel - medium plus bodied, medium carbonation, sweetness upfront from the chocolate, cinnamon comes next followed by the ginger

Overall - this is a nice stout, although on the sweeter side. I would drink this again next holiday season

4.49/5  rDev +4.7%
look: 4.25 | smell: 4.5 | taste: 4.5 | feel: 4.5 | overall: 4.5
Poured into a Fremont small snifter. Pours a very dark mahogany brown, appearing nearly opaque black in the glass with a half finger dark khaki head with great retention and nice lacing. Aroma of dark toasted malt, cinnamon, cocoa, vanilla, lactose and light ginger. Flavor is dark, lightly toasted malt, ginger, vanilla, cinnamon, lactose and milk chocolate. Gingerbread and dark malt finish. Medium bodied with moderate creaminess. Well, this stout sounded a little over-the-top for me, even as a pastry stout fan, but I was wrong to be skeptical. It really does deliver an close to authentic gingerbread cookie flavor, but excellently supported by the underlying malt. The mouth feel is silky and creamy, with clear oat character. The finish has just the right touch of cinnamon and ginger to linger, but not intrude. One of the best pastry stouts I've had. I could easily make this a holiday standard.
Jan 07, 2021

Reviewed by firesidewithphil from Illinois

Reviewed by basaywhat from Illinois

Reviewed by DanBrenda from Washington

We are from Portland OR area and lived in Virginia for a while. We love Hardywood. They are very creative and fun. This beer is interesting because it is intense honey with gingerbread cookie; and full mouthfeel probably from the lactose. There is not intense vanilla or cinnamon, but the flavors profile is all gingerbread cookie mid drink, exactly what it says. It is a 9.2 ABV but they hide it well for those that are not big boozy beer drinkers.

Reviewed by UWDAWG from Washington

Overall- Good, but reminds me more of root beer than gingerbread.

Reviewed by BillAfromSoCal from California

4.06/5  rDev -5.4%
look: 3 | smell: 3.25 | taste: 4.75 | feel: 4 | overall: 4
16 oz can purchased 11/20/20 off room temp shelf for $3.75 at Trader Joes. Canned on date of 10/1/2020.Can states Imperial milk stout with cinnamon, vanilla, ginger, and honey. Poured into the stemmed tulip glass as recommended on the can. Not black...very deep mahogany. Trivial amount of head disappears almost completely within 30 seconds. No lacing. Basically nothing in the appearance that is enticing. Almost no smell at all (conformed by wife as second opinion), including when it warmed up to almost room temp. However, the taste is very good; exactly as described on the can with good balance among all the flavors. Not any overpowering fake gingerbread flavor. Considering the disappointing looks and smell, the flavor is top notch. The feel is quite nice with a creamier feel than you would guess based on the appearance. Overall a great flavor/good feel if you want that flavor profile, but just not worthy of high points in looks or smell. Certainly cannot see how this got a "world class" rating.
Nov 22, 2020
Rated: 3.99 by PaulsBrew from Virginia

Reviewed by PSYCLST from Pennsylvania

Intense sugary lactose and chocolate buzz throughout the sip. Plenty of Christmas spices...vanilla, cinammon etc. The texture is thick but relatively smooth, particularly in the finish. Quite a bit going on here and it mostly hits the mark, although I do find it a bit cloying in the middle before rounding out in the aftertaste. Good effort, at any rate.