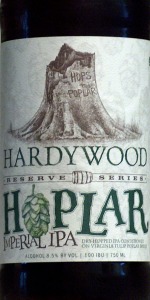 Notes: Hardywood Hoplar follows the wood-aging tradition of the earliest India Pale Ales, which were matured on oak. Rather than oak, we’ve selected the delicate wood of a fallen Virginia Tulip Poplar, which was TreeCycled by CitiWood and toasted for use in this hearty IPA. While this Poplar can no longer rustle in the wind or give shade, it is able to offer balance to the bright citrus and pine character from heaps of Cascade, Columbus and Summit hops with subtle notes of caramelized vanilla. And the tree was hoppy.

In the mid-1800s, when the early IPAs were being shipped in wooden barrels from the breweries of Burton-on-Trent to thirsty British colonists in India, our Tulip Poplar was a mere sapling on the outskirts of Richmond, Virginia. On September 18, 2003, this towering Poplar prevailed to the fierce Hurricane Isabel and fell on Bell Creek Road. Richmond-based CitiWood Urban Forest Products helped us transform the wood from this fallen Poplar into custom designed flavor- and aroma-enhancing infusion sticks. Post fermentation, Hoplar is dry-hopped with a generous helping of whole-flower Cascade hops and conditioned on the toasted Poplar.

Hardywood Hoplar is mahogany in color with a hearty, tan head and offers an aroma of grapefruit brûlée and pine needles, as well as delicate vanilla toffee and a hint of campfire. Medium- to full-bodied with assertive (100 IBUs) yet delightful hop bitterness, Hoplar is balanced with ample caramel malt backbone. A bit of earthy tannin from the Poplar harmonizes with the resinous hoppy character, which dissipates into a lingering finish.

Yes, it's heavy on the poplar. If you're looking for something totally balanced, this probably is not it. That said, the poplar adds a fascinating note of wood that is sweet but not like birch. Unusual and definitely drinkable and high quality. Maybe not one of the top beers in existence, but very good and distinctive.

This beer is in the same vein as DFH Santo Palo with the unique wood aging. Super hoppy beers work well in this sort of brew!

Had this in a tulip glass because of the IBUs, I wanted get a good idea of the bouquet of the hops.

L: Looks like a red ale, deep sunset red hue. Robust head that has good staying power, and persistent carbonation that put on a perpetual show. Head fades with some modest lacing. Super attractive beer, IPA or not.

S: A nose of sweetness like spun sugar. Not as much hop aroma as I expected for a high IBU beer, it smelled like the last day of a state carnival; bare dirt, stale tobacco, animal musk, weathered wood in the sun. Not unpleasant, but like a faint memory. As the beer warms, grapefruit notes appear, but so does the onion/garlic traits of the summit hops. This beer lacks olfactory impact considering its specs.

T: Initially when served cold (about 45 degrees) you get sweetness first, but it is brief. High ABV beers+High IBUs are tricky and once you get over the shock and awe, the sweetness of the malt rides through. Taking slow, thoughtful sips lets the nuance of the wood come through. Novel and pleasant. I'm not a superfan of summit hops and I think after a while I was picking up a green wood flavor from those; I would have liked to have had more of an aromatic hop to minimize some of the funky qualities of the summit. This beer would suffer from too complex of a hop schedule, and I salute the brewery for not getting carried away. Definately unique and somewhat complex, but not going to appeal to everyone.

F: The carbonation level is really enjoyable and helps deliver the complex flavors across the palate. The initial sensation is a modest body, slightly heavy for a IPA, then it fades to a lingering consistency kept afloat by the alcohol and lingering hops, the wood's presence in the background. My mouth watered, yet my lips were sticky. I suspect the big malt bill needed to hit the ABV resulted in a lot of leftover sugars.

O: I'm no master brewer, but I bet if Hardywood had gone easier on the Summit hops and maybe had used some amarillo to distract from the onion/garlic traits this would be spectacularly complex as a hop bomb. Like the Santo Palo, this is a clever spin on a wood aged beer. The lingering sticky sweetness makes me wonder if it could have aged longer or tweaked some other aspect of brewing - whether it was altering the grain bill, choice of yeasts or temperatures I can't venture a guess. It still would go down well paired with some semi-soft cheeses and nuts or a skillet-seared steak with rosemary grilled potatoes and zucchini. It's a little niche-y but more subtle than the Dogfish Head Santo Palo.

Hardywood has an awesome barrel program and I give them credit for trying new things. I'm unfamiliar with what to expect from "poplar" aging but I felt the barrel imparted something interesting for sure, but hard for me to pin down.

The hop profile here is nice but in general I'm not a fan of aged IPAs.

This is one I'm happy I tried but not sure I'll grab again.

Poured from a bomber into a snifter, the beer is a deep, vibrant, caramel copper coloring, with a foamy, clingy, off-white head. Gorgeous. Aromas of rich vanilla, subtle pine and resinous hops characteristics, rich smoky caramel, subtle orange and grapefruit, and woody notes. Flavors are rich and perfectly balanced forward, blending vanilla, wood, and caramel with pine tassel, wet grass, and dank vegetation. Extremely balanced, and as smooth as it is robust. The body is full and smooth, with a bitter resinous aftertaste lined with a tart grapefruit edge. The finish is layered smooth, with a dry undertone, with lingering resinous and citrus notes. Great beer, a truly great beer.

I have to say, the casking really messed this one up for me. Just not feeling the poplar wood, which is the star of the show. Mine apparently brought out the alcohol taste.

Pour: Bomber bottle into a tulip glass. Appearance: Attractive amber in color. Started with a large white head which reduced to more of a minimal offering yet still present after settling. Lacing present on the sides of the glass, but not much. Aroma: Juicy and dank hoppy aroma. A bit of spicy pepper is detected. Woody notes are also present on the deep sniff. Slight alcohol aroma is also detected as well. Taste: Dank and juicy hops are immediate on the sip. the taste mellows out a bit to reveal the Poplar wood roast. Smooth and velvety despite a higher IBU (100). The juicy hop and wood qualities compliment each other nicely. Aftertaste: Woody and earthy elements remain on the back end. Lots of linger after a few exhales. The deep back end reveals a noticeable bitter quality with definite onion like notes. Notes: Big fan of the nose and taste. Love the interplay of the wood and hops. Very unique. I wish it could have finished a little more clean. The back end could be better. Had this at the brewery the previous week and the freshness and taste was a total knockout. Result/Rating: Very Good/ 4.42