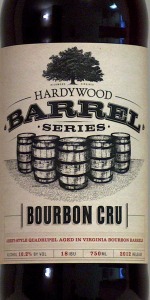 Notes: "Hardywood Bourbon Barrel Cru is brewed in the fashion of the abbey quadrupel, the grand cru of many of Belgium’s revered monastic breweries. Bourbon Cru displays a sunset orange hue with a substantial head and brilliant clarity after months of barrel aging. The maturity and melding of flavors brought on by the freshly drained bourbon barrels lends an extraordinary sense of harmony to Bourbon Barrel Cru. Almond toffee and oaky vanilla aromatics give way to dark cherries, raisins and mature whiskey. A bit of plum flavor is greeted by caramel overtones and an assertive yet incredibly rounded body and a lingering, bourbon-laced finish.
Abbey-style Quadrupel Aged in Bourbon Barrels
12% ABV
18 IBU"

750ml bottle into a Duvel tulip. Because nothing says a hot summer day like a barrel-aged quad.

A: Pours a dark chestnut color. The head is a one finger off-white shade that starts off looking rough, but becomes smoother as it recedes. It retains a thin collar around the edges of the glass quite well, and tries to leave slight lacing on the glass.

S: There isn't a huge oak character here, more of a general bourbon note - still, it's presence is very welcome. I actually pick up more in the way of milk chocolate and hazelnut than I do typical dark fruits. However, they are there, if not as bold as I'd like them to be. Good aroma, but I expected more.

T: Bourbon opens the flavor profile quite respectably. After that...to be frank, I'm not picking up a whole lot. I think the problem is that apart from the bourbon character, the other flavors blend too much, harming its distinctive complexity. The finishing flavor is far more nutty than fruity, or even caramel-y. I don't note much of an oak character, either. I'd say it's closer to an English barleywine than a Belgian quad. Still, I love how it isn't remotely harsh. In this barrel-aged world, I can safely say I've had a few non barrel aged 10%'ers that were boozier than this. Still, I wish it had SOME depth to it - it's getting a little boring drinking this.

M: This one is pretty dry on the back end. Really dry, actually. It's also rather clean (for a quad) as well - giving it good drinkability and roundness at the cost of reduced decadence and flavor. That's actually this beer's best feature; in spite of the bourbon presence, it could honest-to-Slaanesh pass for a 7% brew. Even as it warms up, the alcohol presence is well hidden. Good carbonation helps drinkability, too.

O: This does an excellent job of providing bourbon qualities without the heat. As a quad, though, it's not very successful. There isn't much sense of complexity or boldness. But you know what? I like it to an extent. I won't have much trouble killing this by myself.

MUCH better cold, and DANGEROUS when Cold too..

It already hides its high ABV and booziness within its complex and yet sweet smoothness.

Cold its so drinkable you could swear its a simple belgian.

Drink it room temp or even say a little on the hot side and the bourbon really comes out.. and you can feel the alcohol hit up front.

Either way its a favorite and I look forward to it every year.. buy a few cases to celebrate and for special events.. A great beer to share with others.

Appearance: The body of the beer has a brown tea color and it is opaque. It has no head but a lot of small carbonation bubbles form along the surface of the beer in a fizzy fashion.

Aroma: The beer has an obvious alcohol aroma but it is quickly replaced with the scent of dates, cherries, and brown sugar.

Taste: Up front the alcohol kisses the edges of the tongue. Then, a sweetness rolls over the palate with a brown sugar and caramel flavor mixed with a light touch of cherry. It is a sweet tasting beer but it feels mellow and easy to drink so that the sweetness never becomes too strong. The aftertaste is a bit more of the alcohol with a bit of what tastes like cinnamon. Over time a bit of toffee flavor develops on the palate while drinking the beer which is very nice.

Mouthfeel: It's a very smooth and easy to drink beer with good carbonation. It's just a very enjoyable beer.

Overall: The aroma was decent but it was nothing compared to the flavor and smoothness of the beer. It is the kind of high alcohol beer that you could sit back and enjoy. The beer focuses on a sweet caramel and toffee flavor which is very mellow.

22 ounce bottle into a chalice.

Good beer- flavorful and well blended. Have to admit to expecting this to be a little better.

T - Bourbon, wood, pretty figgy, something more distinct maybe grape in the tart aftertaste. Blew me away when it was room temperature.

M - Good carbonation, should be great next year from corked 750ml bottle.

O - Very strong brew from a relatively new brewery here in Richmond. I got 9 bottles from the release and I am ecstatic. I was very impressed with the bourbon barrel-aged quad.

Pours a muddy brownish copper with a half finger of head. The nose has really nice bourbon notes. The bourbon comes through really well in the flavor profile and there is no discernible burn. The downside is that the body is thin for the style and the rich sweet readiness that I love so much in a quad is just not present.

Overall impression: A comparatively less complex quad than the true Belgian Trappists but with some interesting bourbon notes that make for an interesting sipper. Much closer to an abbey quad than a Trappist style quad because of sweet finish.