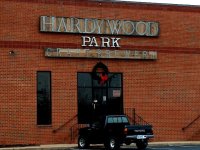 4.41/5  rDev +3.8%
vibe: 4.25 | quality: 4.75 | service: 4.25 | selection: 4.25
V: This place is in a somewhat industrial section of town (more gentrified than when they opened), so don't expect much scenery. It has a fairly large amount of floor space, with two bars (only one was in use at the time) and room off to the side for special events. A decent amount of seating, though not excessive. Lots of merch.

Q: Everything seemed super-fresh to me - all made on premises.

S: The service was friendly and prompt , though I didn't ask any beer-related questions.

S: A decent selection of Hardywood beers, with twelve taps: GBS, Singel, Peach Tripel, and my favorite of the night, Apple Brandy Mega GBS. They also had a ton of bottles for sale; some were old classics and others were one-offs (i.e., their 8th Anniversary stout).

4.79/5  rDev +12.7%
vibe: 5 | quality: 5 | service: 4.75 | selection: 4.5
It is a huge warehouse and we went on a cold night, but it was very warm inside and the lighting + their holiday design was beautiful. There was a talented bluegrass band playing live. Staff were nice and helpful. Also I loved the food truck outside too. Lots of outside seating, perfect for great weather.
Nov 11, 2019
Rated: 4.03 by MikeM75 from Virginia

Rated by drds89 from Virginia

Reviewed by Jdstratt from Virginia

Rated by CChafin from Virginia

2.34/5  rDev -44.9%
vibe: 1 | quality: 3 | service: 2 | selection: 2.5
I must be getting old but wow was this an obnoxious stop--I was ready to move on to the next as soon as I stepped in. And finding a parking spot wasn’t easy either. Being in an industrial parkway that curves and loops, street parking seems to be the only option, and due to the nature of the zoning this can turn into an unnecessarily long walk when there seems to be large groups of people driving solo to meet each other at Hardywood.

Anyway, walking in, it seemed like we were heading straight into a small bar with taps, but no one was tending. There were a few chairs by the entrance, and some high tops to the left, but there was a deafening screeching noise coming from our right. Turns out a girl punk band was playing in their brewery/garage(?) space, and they drew a huge crowd. The line for taps in that space ran directly through the crowd trying to watch the band, and it was almost impossible to get a single beer. It was a hassle for all involved, including the bartenders who acted like we should be there to watch the band and not drink the brewery's beer, which was bland when contrasted with the dumpster fire happening before us.

It's a shame that their secondary spot right next door was closed to the public, because it appeared to have 10x the space, with a cleaner look and more tables and taps. But it is apparently solely used for private events--and whatever event they were having in there had a total of 10 people in attendance, which seems like a complete waste.

Based on their branding alone, I thought this was going to be the most chill, receptive stop during our time in Richmond, but it was exactly the opposite, and to their detriment. The funny thing is, I normally like punk, but that's not why we came here, and I couldn't even enjoy the beer we did order, which also happened to come in a plastic cup. I don't understand how this is an acceptable way of doing business at a brewery on a Saturday night, but every other brewery in Richmond is happy to pour beer, believe it or not, and even provide plenty of seats and tables. And there's plenty of breweries to choose from!

4/5  rDev -5.9%
vibe: 4 | quality: 4 | service: 4 | selection: 4
I've been to Hardywood for many beer releases, which are all very organized and efficient. It's also a great place to visit in general. Plenty of space to move around and places to hang out in the parking lot when it's warm outside. I usually try to make a visit here whenever I'm in town.
Mar 03, 2018
Rated: 3.96 by srw from Virginia

Reviewed by Mikemister from Virginia

5/5  rDev +17.6%
vibe: 5 | quality: 5 | service: 5 | selection: 5
They are inventive, innovative. Both sides of brewery are spacious, one side is usually hosting live bands to entertain, the other side is where the long lines take place for purchasing new releases. Family and pet friendly, food trucks onsite most of the weekends.
Dec 17, 2017

Reviewed by Nichols33 from Massachusetts

Place looks like it would be a cool place to hang out on a nice night. I was there when it was 25 degrees out so we were stuck inside, which is a solid place to hang but nothing all that different from any other brewery that has a good size brew pub.

3.74/5  rDev -12%
vibe: 3.75 | quality: 3.5 | service: 4 | selection: 3.75
Finally got to check out Hardywood after having been to Richmond several times over the last few years and never getting there. Had to park in a lot across the street since they have most of their parking area blocked off for outdoor seating. The place is pretty large, not surprised by the amount of beer they've been putting out now. The vibe of the place wasn't all that special and there weren't a lot of people there either. Their selection wasn't super impressive, it was pretty standard stuff really which was a little disappointing. The service was good though, I can't complain about that at all. I have to say though, it seems like they're getting less business due to the rise of some of the smaller/newer places opening up in the Richmond area.
Oct 14, 2017

Reviewed by spacecake9 from Illinois

4.23/5  rDev -0.5%
vibe: 4 | quality: 4.5 | service: 4 | selection: 4.25
Hardywood is amazing. You will likely park your car at least a couple blocks away. When you walk up you will probably see 100 or so people sitting at picnic tables enjoying a beer and maybe food from one or two of the food trucks. Inside you will have 6-8 different beers in bombers to choose from to go. And you will have 6-8 beers on tap to enjoy. Only downside is out door beers come in a plastic cup. Gotta go, it's fun.
Oct 08, 2017
Rated: 4.29 by rossracing from Illinois

4.15/5  rDev -2.4%
vibe: 4 | quality: 4.25 | service: 4 | selection: 4.25
The wife and I went down to Raleigh, North Carolina, for a weekend of beer, food and art, and our first stop was Hardywood in Richmond. It was a Saturday at 3pm right after the brewery had opened and the place was already buzzing and bustling. Thank goodness they have a massive amount of space!

Two bars, one of them right as you go in with a merchandise stand next to it and another one located next to the tanks. Both have different taps so you get to try goodies here and there.

Service is efficient and pretty friendly, and the beers are tasty. I tried the bourbon-barrel barleywine and enjoyed it so much that I bought two bottles. The wife enjoyed her Hoplar Imperial IPA (aged in local wood), so we bought more bottles. I wasn’t a fan of the bourbon coffee Sidamo stout, but I’m glad I tried it.