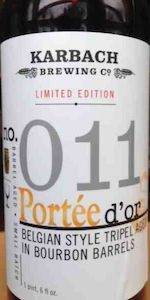 pours a deep yellow / copper with a half finger of off white head. little retention.

bourbon is dominant on the nose

bourbon is the initial taste. soft, oaky, vanilla. a bit of spice, close. the 'tripel' flavors are not as noticeable, but become more so as it warms.

Overall: A bit rough around the edges, but a lot of good Bourbon character shines through a decent Tripel base.

A: Pours a fairly clear copper/orange color. A two finger white head forms with good retention and lace.
S: A big malty sweetness in the nose. Maybe some wood, and vanilla. A hint of nondescript fruits. Kind of a butterscotch aroma as well.
T: Malty sweetness, some oak and vanilla. Stone fruits and apple cider like. That butterscotch flavor is there as well. As this warms, peppery spice comes out. Really odd, and kind of a mess.
M/D: A medium body with soft carbonation. Not as crisp as I would like. Plenty of booze here, and it really kicks in the back of the throat. Add to it the odd character of the beer itself, and not something I am coming back to often.

Not a fan of this one. All over the place with no definition. Far from the best FUN release, and really a poor offering overall IMO.

What a beer. Spicy and sweet Belgian golden goodness. The barrel provides an amazing vanilla/whiskey/oak character that marries well with the hot apple pie notes from the base beer.