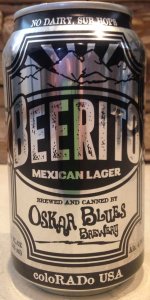 Beerito, a Vienna Lager named to reference the connection between the style and Tex-Mex cuisine, is dark for its breed, being positively brown in color, and crystal-clear and effervescent in body. The medium, pillowy head is the color of ancient ivory and leaves sparse lacing that consists of irregular bands and caverns. The nose is light-medium in intensity: sweetish, slightly caramel lagery grains set against tea-like, slightly spicy hops, topped by slight alcohol overtones. The palate follows the nose, although the caramel is darker and less sweet and the hops have a slight citrus character. The hop bitterness is quite bright and light-medium in intensity, about what you would expect for the style, and provides a nice counterpoint to the malt character, which is fairly dark for the style, almost toffeeish. The finish is quite clean, showing just a bit of citrusy hops; the linger is a very mild indeterminate hop bitterness that lasts a few minutes. Mouthfeel is on point for the light-medium body, and the texture is medium-creamy and quite peppery from the very enthusiastic carbonation. Beerito is well-balanced and substantial without being filling, and crisp and smooth-drinking to boot. Extra-curricular testing shows that it stands up well to heavier, more flavorful food, and it pairs with a bacon double-cheeseburgerito every bit as well as a Negra Modelo does. (12 oz can, 38 days after pkg)

The traveling taste that is the Vienna lager has taken its origins from the savory and malty character of central Europe down to immigrating Mexico with a crisper, drier, more simplistic character and is the reimagined at Colorado's Oskar Blues brewery. And now the taste that's synonymous with Mexican amber lager seems right at home in the Rockies.

Deep goldenrod and with the light amber saturation of honey, the beer crowns with a loosely knit froth, casting forth its toasted grain character of bread crust, nutty, toasty scent with a scant floral hop veil. Its taste brings home the nutty sweet savoriness along with a toasted cereal undercurrent.

Much of the same transpires over the course of the middle palate. With the charming chestnut flavors dissolving, the cereal sweetness remains in all its freshly toasted glory. Lightly bitter in finish, the beer's herbal and peppery hops balance the majority of sweetness while allowing the beer to remain malt-forward.

Finishing herbal, minty and spicy, the lager dries to a crisp and nutty taste that's remiss of peanut skins, leaf and pepper with a short, starchy-sweet aftertaste that leaves the palate wanting a more complete barley portrayal.

Poured from a 12 oz can into a pint glass

S: Earthy and malty. A bit of caramel sweetness

T/F: Sweet caramel malts... bread and grains. Balanced with some hop bitterness towards the back end. Light in body... good carbonation. A little medicinal/earthy.

O: kind of a 'meh' beer. Expected better from Oskar Blues, and not a lot of reason to revisit this one. Easy session beer I suppose, and seeing as I just mowed the lawn this filled its purpose.

I bought this on a whim, but I have an idea its going to be pretty decent. I happen to genuinely like dark Mexican Beer like Negro Modelo. Pours with an orange amber color and a decent cream colored head with moderate staying power. Nose is caramel and roasted malted grain.

Flavor includes light and dark malts, a touch of roasted nut flavors, and late breaking sweetness that doesn't ruin the overall balance and effect. Texture is carbonated but works for the style. These are tasty and probably very good in quantity in warm weather. Mission accomplished with this one.

S: [3.25] Very malt forward. I get cereal scents, like corn and then maybe some grassy notes.

T: [3.75] Better than the nose. The taste has some similarity to the nose but builds on it quite a bit. There is the cereal/corn flavor and then a nice fruity spiciness. Some lingering citrus on the finish.

O: [3.50] This is really light and easy to drink. A little more complex than a typical lager with some nice influences from citrusy hops and floral notes.

Poured into a half pint glass: color is nice darker amber, head is very light tan with super fine bubbles and few small ones, head presents at least 1/2 inch deep on the initial pour and then remains about 1/4 deep with some nice lacing on the glass sides.

Smell is fairly subdued, limited malty notes or much else, letting warm to see if more presents.

Taste is pleasant vienna malt with caramel, toast, toffee, nuttiness, then some light herbal and grassy hops. Great caramelized flavor thats not overly sweet with balance of the other malt flavors and hop balance.

Mouthfeel is moderate, carbonation seems just right, a bit of drying on the tongue.

Overall a pleasant spin on the style with a good caramelized flavor and malty depth for just 4.0% abv.

This beer pours a very clear deep amber with a large fizzy head. The aroma offers up lovely rich toasty, caramelly malts, with tones of toffee and some black pepper hop aroma. The flavor is rich but not sweet, lots of caramel and toffee, some black pepper, and a bit of some odd umami that is very pleasant. The mouthfeel is a touch rich, with a huge amount of creamy fullness. Overall this is a very nice beer - but please change the name, I do not want to think of drinking a burrito.

12oz can poured into a pint glass. The aroma is biscuity malts and hints of hops. The taste is a rather clean lager with toasted malts and a mild hop bitterness in the finish. The mouthfeel is light bodied with a high amount of carbonation. Overall, a solid Vienna Lager that is a solid sessionable beer at a modest 4%.

Poured out a clear, reddish color with a small, white head. It smelled malty and sweet with a touch of floral notes. Good toffee & caramel malt backbone with a spicy bitter hop bite.