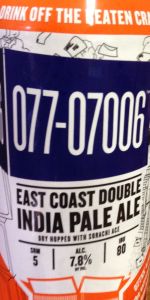 Notes: 077XX is our double IPA focused on harmonizing the extremes inherent in the nature of an American double IPA for long-term drinkability. 077-07006 is the Dubviant tuned up with an exclusive Sorachi Ace third dry hop inspired by the places that get it in Caldwell. Sorachi takes lead bringing 0’dub’s mix of dank resins and tropical fruit tunes down a pithy lemon path. Drink 077-07006 when a little zest is in order.
View: Beers | Place Reviews
Reviews: 16 | Ratings: 87 | Log in to view all ratings and sort
Reviews by rossracing:

Had this af the Cloverleaf on Sunday, having never tried anything from Caton brewing before. I liked this a lot and although it wasn't a terribly strong or memorable beer, the grapefruit flavor and the easygoing nature of it led it to go down pretty quickly. It' s not often that something new grows on me so quickly!

This beer had a nice, blonde hue to it as it settled into my pint glass, as it had a cloudy appearance to it and a nice head that took a while to settle. There was quite a bit of good lacing as well, as I made my way through this, as this beer had a thicker consistency than other IPA's that I've enjoyed. Lots of grapefruit was also in the taste, with a dry mouthfeel and a bit of a herbal aftertaste like tea. The alcohol led itself to a nice warming effect here but couldn't really be detected in the taste at all, and the hops were not strong or earthy here either.

The strength of this beer was matched by it's taste - understated, present, and nicely balanced. While not on par with Dogfish Head or those from the West Coast, I enjoyed this a lot because of it's slight dryness, and lingering citrus taste. A good offering to have on tap and worthy of having my zip code as part of it's name, I may give this a go again before the Summer is up. A must-try for any local hopheads and IPA lovers!

On tap at Cloverleaf Tavern. Excellent IPA dominated by a strong hop backbone with superb flavors of tangerine and lemon zest. I was thoroughly impressed by this brew. Easily drinkable. Recommended.

Pours a clear amber red with one inch of off white head and moderate carbonation evident. Nose is sweet and floral, taste has more pine, citrus, grapefruit hops, some lemon. Medium body and low carbonation.

Overall a little sweeter and fruited than the normal 077XX. I don't like it as much but a good beer I was glad to try.

Taste- Floral flavor up front followed by grapefruit and a hint of spice in the finish.

Feel- Slick and resiny with a bitter dry end.

Overall- A good beer but probably my least favorite from Carton thus far. While quite easy drinking for a DIPA, it leans more towards the floral and spicy side which doesn't do it for me.

I had this last night when the wife and I went out for my birthday. Nice golden color, relatively smooth IPA. First Carton beer I had and really liked it.

Murky orange with about a finger's worth of beige-ish head gives this I e a nice little appearance.

Taste pulls in with an earthy, gritty quality before big time dandelion follows up before a dash of heat.

Finish is dry, bitter and completely lacking sweetness despite a nice malt balancing act. Another great and complex beer for me today - yay me!